My supporter for today who has very generously donated to
The Fred Hollows Foundation is:-
﻿Goddard Jewellers﻿​.
Special thanks to Wayne and Gillian Goddard for supporting my ride and chosen charity. 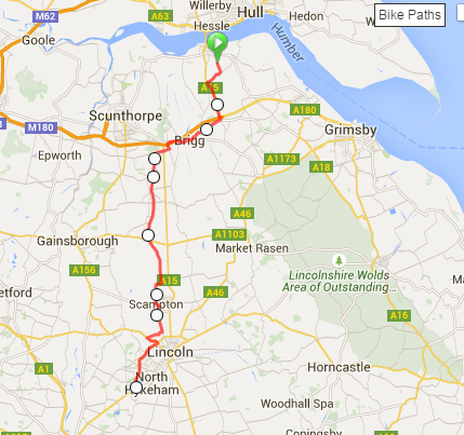 What a mouthful the start and finish place names are today – and – even more interesting names were to come before the day was done!!

From our B & B at West Wold Farm I got Finn out of his shed, bade good bye to Pam, her Irish Setter and Cocker Spaniel and headed off on the B1206. It was a bit more “undulating” than I thought to start with, maybe hilly even, but it soon became undulating with only a couple of small hills for the rest of the day. After those early hills the farmland went from pasture to cropping with very dense crops of maize, wheat and barley growing really well. This was a lovely biking route within hearing distance of the A15, but with no traffic this Saturday morning except the occasional tractor.

A few wiggly turns to pass under the beginning of the M180 motorway and the A18 took me into Brigg. This looked a pleasant town although I think everyone was still asleep and there was little sign of activity. A few Saturday morning lycra riders passed me and I later saw them on their return journey so I suspect they may have started here. I re-joined the B1206 and meandered down to Redbourne. I should have crossed the A15 here and headed down the B1398 but when I looked down on the A15 I saw a wide shoulder and very little traffic so thought – that route will do me!! The A15 road is a very straight road – a Roman road.

Disappointingly the shoulder all but disappeared a very short time later, so it hadn’t been a wise decision at all!! I pressed on as morning tea was proposed to be taken at Hemswell Cliff. Down the A15 I went, and then saw a sign saying “Spital-in-the-Street”. What the????? I didn’t know if this was an instruction, whether there was going to be something in the middle of the road, or if it was in fact a place name.

It turned out to be a place name and the “spital” bit comes from “hospital” apparently as there was a hospital for the poor here many years ago. It is a very small place nowadays. Really just a junction of roads and I only recall a pub, a service station and within its bounds a café. We decided to have coffee here – and what great coffee it was – and the muffins – excellent!!

I checked out the road map and my notes again and decided to get back on the bike roads – a right hand out on to the A631 and then first left which would bring be back on to the B1398 – which I should have gone on 8 miles back up the road. However – if I had done so – I wouldn’t have gone through Spital-in-the-Street – or had such a great cup of coffee.

I would now be taking this road pretty much down to the A46 ring road around Lincoln where I would head towards Newark-on-Trent. Pat and Pauline would go part way in this direction before heading back on to the A15 and Lincoln ring road. I had no accommodation booked in this area – so it was up to them to go on ahead and find something.

My ride continued through lots of orderly cropped fields and I passed through many nice small villages. Some, but sadly not all had lovely little village signs. I wished there had been one at Glentworth so I could have sent a pic to Margie for her sons. Further along I came to Scampton and the signs there indicated an RAF base which explains the increase in airforce vehicles I had been seeing.

I turned off at Burton – that is the steep descent on the elevation chart – but what a very pretty town indeed – and within “cooee” of Lincoln. I just love these small towns – such attractive gardens and hedging as spring merges into summer. Burton sits on the edge of the Lincoln Shelf overlooking the River Trent. I dropped off the “shelf” as I headed to Burton Waters where apart from getting lost in what appeared to be a retirement type village I came across the Fossdyke navigation channels of an extensive canal network. The route I had taken from Burton to Burton Waters was one of the nicest parts of the ride to date. Only about 3 miles, but absolutely beautiful.

Telephone contact with the crew gave news that they had got the last 2 rooms at Travelodge Thorpe-on-the-Hill. From the name, I imagined an uphill stretch for the end of the day – but there was none so that name bewilders me to this day. They had been very lucky to get these rooms as there was an Indian Wedding nearby this Saturday with over 400 guests!! Staff at the Travelodge were lovely – and Finn was allowed to sleep inside yet again!!

Pubs were close by to drive to – so we headed out for dinner to another nice meal. Finding a bad pub meal is like finding a bad Marlborough Sauvignon Blanc – it just doesn’t seem to happen!!