All funds raised during my ride across Australia went to either the Australian or New Zealand Heart Foundation depending on the donor’s wish.
​ It was a thrill to be named Best Individual Fund-raiser for 2011 by the Queensland Branch of the Australian Heart Foundation.
​Special thanks to EVERYONE who supported my ride. 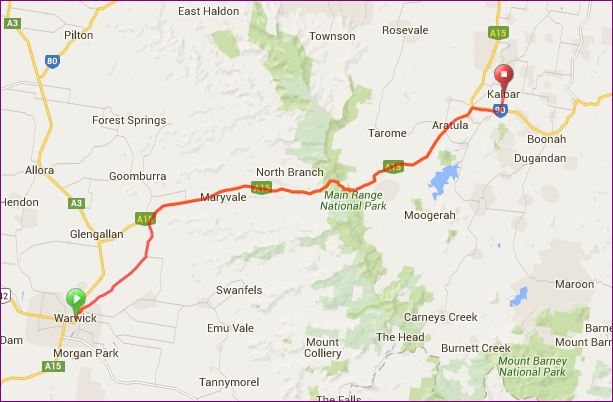 Today I will leave the lovely town of Warwick and head off on the Cunningham Highway (now 15) across the Great Dividing Range. I will climb to the highest point of the trip at around 800 metres above sea-level. That will be a terrific feeling - cos its all down hill from there!! And quite steeply so - I should be able to coast for quite a few kilometres before arriving at Kalbar.

It is a pretty busy piece of highway with a good deal of truck traffic, so I will have to go carefully. I often hear of "accidents" on the Cunningham Highway at Cunningham's Gap - so all care needed!!

Mother’s Day!! And I hope my dear mum had a good day. I was pleased to speak to her before I set off for the day!!

Yes, I know at one stage I had this as a rest day, but I have to admit, this was part of the ride that had not been resting easily on my mind. One reason was the amount of climbing to be done early in the day, another reason the amount of traffic on this stretch of road (particularly trucks) and then also concern that significant roadworks were being carried out due to damage during the recent Queensland floods.

All these thoughts spun around in my head, so I decided to tackle it today and not wait another day!! I also thought the trucks could be lighter on Sunday compared to a week day.

Off I headed on a very crisp morning – the radio said it was only 7 degrees – brrrrrrrr! While the outside of me was cool, the inside certainly heated up with the continual uphill drag. It was pretty hard work, and I couldn’t make particularly fast progress. I took on plenty of fuel and drinks and decided that lunch would be taken at “The Crest”. The sad thing was – it was being used as a base for the roadwork that was going on, so we decided to push on until the next rest stop.

After all the climbing, I was looking forward to the 9.9 km descent – I must admit with both excitement – and fear!!

I didn’t really need to worry – the massive roadworks meant there were 2 “stop/go” spots. The guys were terrific and said they would let me be the last “vehicle” through so I wouldn’t have to worry about traffic behind me. The speed limit had also been fixed at 40 kph – so all in all – everyone descended at a very sedentary pace!! I didn’t have to pedal for ages – but both hands got a bit tired with the workout on the brakes!! I wouldn't mind a crack at descending this hill once the road works are finished!!!!!

The next  “rest area” was at Aratula so we took lunch even though only 10 kms from our destination for that night.

After lunch it was off the Cunningham Highway to a place I admit I had never heard of – Kalbar – and we are settled in at the Showgrounds for the night.

Just received a big surprise - Facebook buddy "Liz" and her husband "Phil" called into the camp to say hello and outline plans for tomorrow. Liz and her cycling team member Peter will be cycling towards Ipswich with me. Great stuff - I am really looking forward to that!!

I won! I won! I don't have to go to school anymore.
Eddy Merckx - After winning his first bike race.