Interesting New Zealand facts:
New Zealand had no predatory animals prior to European arrival, making it a paradise for birds - many of them flightless.

New Zealand has the world's largest flightless parrot - the Kakapo; the worlds oldest reptile - a relic of Gondwanaland called the Tuatara; the biggest earthworms; the smallest bats - the only native land mammals; the heaviest insect - the Weta; some of the oldest trees; and some of the rarest birds, insects, and plants in the world. 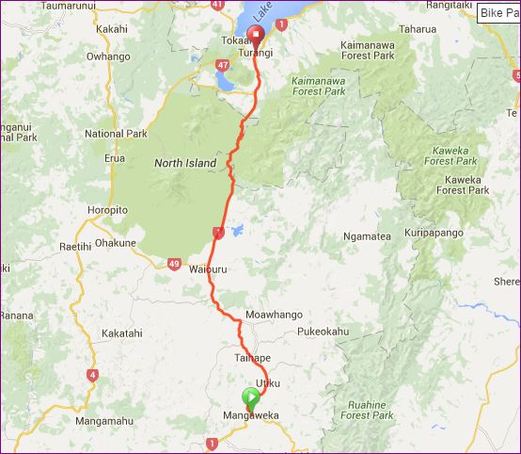 Another day of hills – and on this day we will reach the highest point of our journey!! Again a couple of small towns through here where we can enjoy breaks – Taihape and Waiouru – as we ascend onto the North Island Volcanic Plateau.

Hopefully we get good weather through here as it can be a bitterly cold area!! The section of road between Waiouru and Rangipo is named the “Desert Road” and we should get a great view of the 3 volcanoes of Ruapehu, Ngauruhoe and Tongariro. There has been a little volcanic activity recently – I wonder if we will see any!

There are some hot pools near Turangi which should be great to soak in after what could be another tough day riding. If the weather is good though – this will be a spectacular days riding.
REVIEW:-

All up and away just before 8:00 am - firstly was the need to get back to State Highway 1 from our campsite beside the Rangitikei River. It was a pretty steep kilometre - and then we were off. A crisp and cool, overcast morning. First "stop" for the morning was 20 kms away at Taihape. This included a pretty long steady climb almost straight off - just to get the heart rate ticking!

Only a short break taken in Taihape, and we pushed on towards Waiouru - climbing pretty much all the way! Definitely not fast progress - and it wasn't helped by worsening weather - the showers became heavier, and the rain became icier and eventually there was hail. We were pretty cold by the time we got to Waiouru for lunch.

Not far short of Waiouru there were flashing police lights (just to frighten Pat) - but this time not for her - but to warn us of an accident ahead. A truck travelling in the same direction as us had gone out of control and wiped out a section of fence along the left hand side of the road (thank goodness we weren't riding there at the time) - and had come to rest against a bank. Oh dear - what a mess - fortunately no-one injured - but I don't think the boss would have been very impressed!!

Clothes dried out over lunch - on our way again - onto the Desert Road. Low cloud and rain showers swooping in prevented us from getting an absolutely clear view of Mt Ruapehu, Ngaruahoe and Tongariro - but we could see sufficient to back up how we were feeling - that the snow line was not that much higher than we were! Brrrrrrrr!!

Passing the highest point - 1074 metres above sea level and we thought it would be all downhill from here. Not quite true - some pretty steep up and downs until we got quite close to Turangi and then there were some marvellous downhill runs where we got up enough momentum to get up the next climb. Our average speed picked up quite a bit!

In general the winds were kind to us today - south-westerlies in the main, but there was a period where they were more westerly and these gave us a pretty good buffeting.

So just before 4:00pm we pulled into Turangi and saw the sign - Settlers Motel on the right - our residence for the night. What a wonderful welcome by Wayne and Helen - and the unit they gave us was a beauty - 3 brms, plenty of space for us all - and - the Hot Spa was working!! Wonderful to have a good soak to hopefully ready the tired bodies for tomorrow's ride. Wayne and Helen joined us for a nice glass of Toi Toi Sav Blanc before we headed off to dinner and it was good to hear all about this area of New Zealand from "locals".

Wayne also locked our bikes safely inside his "man-shed" - how great for Don - after 2 weeks of this great adventure - he was able to go to the "shed" with Wayne and talk "man-stuff"!!

After dinner - 4 weary people headed to bed - and I took the time to catch up with updating this web page before turning in!!

Great day to have completed - to me, even though I biked every hill (unlike coming out of Dunedin) - it was one of the toughest days to date.