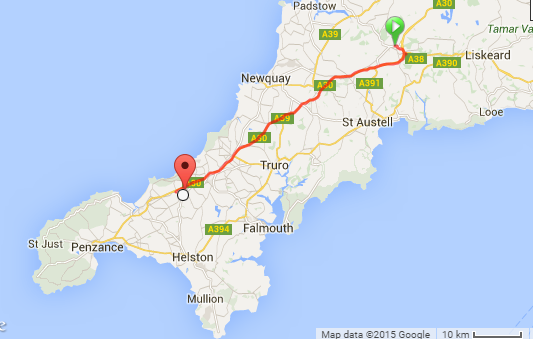 I started getting that “nearly there” feeling, but still had to keep everything in perspective! As I found out on my last ride when Don fell off, badly breaking his arm – the trip dynamics can change in an instant!! I didn’t dwell on such things, but every now and again the reminder would flash through my mind ensuring I had to remain vigilant and careful.

With only 60 kms to go today we took a more leisurely start to the day. I had taken notice of the elevation chart though – and despite a shorter distance than most of my days - in fact – this day had the most climbing of any throughout the entire trip!

There was quite a bit of traffic on the A30, but it was a well-constructed dual-carriageway with the best width shoulder of the entire journey. Throughout the course of today’s ride, I saw  a number of cyclists heading north – some with panniers, some without, a larger group with a signed support vehicle – and because I had a head wind – they were all enjoying tail winds – lucky buggers!! It was super to wave out – I wondered if they thought – she’s nearly there and we are just setting off – as I had all those days ago back at John O Groats!! I had considered taking some lesser roads in parts – but they tend to be even more up and down than the main roads. Seeing these other cyclists using the A30 made me think it was their road of choice through this area – so I would stick to it too!

“Fidler’s Green” was ear-marked as being about half-way – so my first break would be taken there. I would have also completed the biggest climb of the day by then. There were certainly some long downhills and uphills along the way as well as lots of potatoes being harvested. I guess the population of the UK eats lots of roast spuds and fries!! What was becoming increasingly frequent through this area was the presence of big wind farms with very large windmills. I wasted a lot of time taking photo’s thinking I was “close” to them – but as I rode on there were some virtually on the side of the road - I could almost have got off and patted them. I had read about “noise pollution” being a down-side of this way of power generation, but I must be going deaf as I couldn’t hear anything above the noise of the traffic.

Again I saw large power pylons marching across the countryside – seemingly in the direction of London – but I wouldn’t really know where they were headed. All I thought was that they were certainly carting a lot of energy into the “grid”. A bit further on and I saw signs saying “solar power farms”. It was a while before I spotted one – and it amazed me how acres of this beautiful farmland were literally covered in solar panels. I hadn’t really imagined England as a sunny country that would produce solar power – and that they would use such productive land for all these panels! It seems strange to me that in Australia, particularly Queensland  we have so much sun, and so much unproductive land (in comparison to this part of the UK) yet we lag way behind in solar production.

Plenty of time going up and down hills to think about things like that!! The section of A30 from Fiddlers Green to the turn-off for Truro narrowed to one lane in each direction for about 8 kms. Strange really. It wasn't much slower doing this section on a bike as the volume of cars, and particularly cars and caravans going from 2 lanes to 1 caused massive queues. Motoring in the UK - much better on bike!! There are lots of caravan parks in this area, and lots of coastal areas nearby – so everyone was heading away for the weekend or longer. My up down, up down ride continued and it was a pleasure when the road became dual carriageway again and I had my shoulder back!

I caught up to a cyclist heading to Land’s End along this section. He had left John O Groats on the 1st June and would finish on the 30th June, and had ridden down the western side of the country.

For the last part of the ride I took the A3047 which was quieter in some respects but went through built up areas until I made it to Camborne. I had booked ahead here – and Pat had travelled on and established where we were to go, then returned to the Tesco at Camborne to await my arrival.

I had seen a Bowls Club sign not too far back, so after checking in, showering and changing we left Finn padlocked in the garden of the Hotel and headed out to the Bowls Club for Pat to have a roll up with her Taylor Bowls. It was a very cute place, The Bickley Smith Bowls Club, and the people were extremely friendly and interesting to talk to. Apparently there is also a Camborne Bowls Club – but a gentleman here said – the members there all have wheelbarrow’s – haha – good way of saying they go to win trophies and not for the social side of the game!

We headed back to the Hotel and watched the final of the Eastbourne Women’s tennis tournament, before taking a quick drive around the area to check on our route out in the morning and generally just to see – whatever there was to see!! It was a beautiful sunny, warm afternoon / evening!!

Pinching myself that tomorrow I will reach Land’s End!! 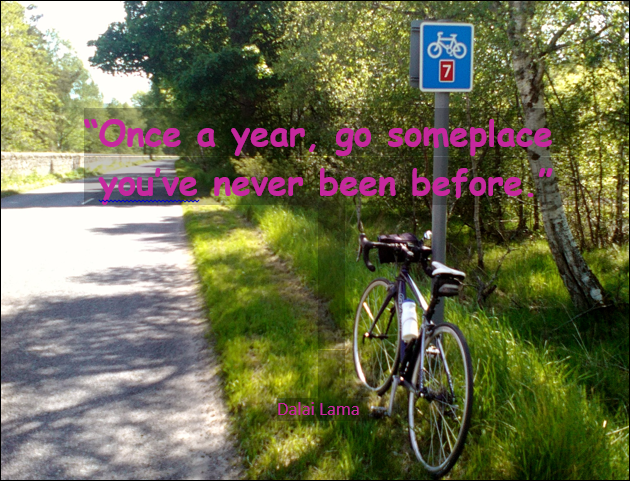