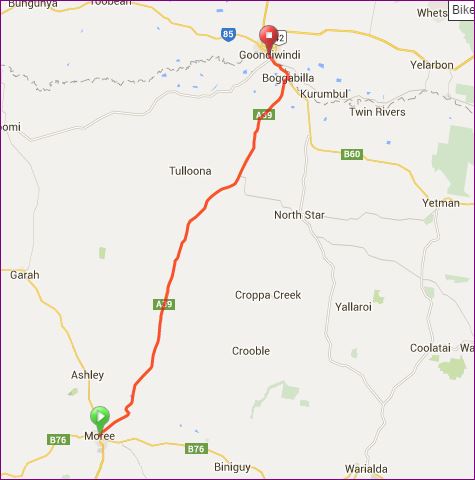 It looks a pretty up and down sort of a day along the Newell Highway - 39 to Goondiwindi. Tonight I will be in Queensland!!

Goondiwindi has a population of around 5,500 and is a medium sized town for Australia. Goondiwindi is at an altitude of about 220m above sea level and is one of the southernmost towns in Queensland. Goondiwindi is on the Macintyre River.

The name Goondiwindi derives from a local Aboriginal word meaning "the resting place of the birds".

The most famous resident of Goondiwindi was Gunsynd, a Thoroughbred race horse known as "The Goondiwindi Grey", ridden by Tim Lowe. In the late 1960s and early 1970s Gunsynd had 29 wins including the 1971 Epsom Handicap and the 1972 Cox Plate and came third in the 1972 Melbourne Cup. The name "Gunsynd" came from Goondiwindi Syndicate (Gun= Goondiwindi, Synd = Syndicate). A statue of Gunsynd is located in a park in the town centre.

The town is a major transport nexus for trucks and other traffic travelling between the southern states and Queensland. The Newell, Leichhardt, Gore, Cunningham, Barwon and Bruxner Highways all merge at Goondiwindi or close by.

Goondiwindi is also a major centre for agricultural production with the district producing and growing a diverse range of crops and fibres. The mainstays of the local economy are anything from wool and beef production through to the growing of cotton, sorghum and corn in the summer period. The winter crop growing season sees the planting of wheat, barley and chickpeas.

A great Triathlon is held here each year - the Hell of the West!!!! More bowls clubs for Pat!!

So good to wake up to another beautiful day – I can’t believe the luck we have had with the weather!!!! I know I am inviting trouble commenting about it – but not one day of rain the whole journey. Here’s hoping it will hold off until the 10th May!!!!

Left the caravan park and first stop was in “town” for a photo and a story with the Moree Champion. After that, a few steps across the road and “Ando” (Michael Anderson) was finishing his morning radio show. Into the studio (padded cell) I went, and had a chat about my big adventure – just a bit too nerve-wracking for me doing things like that – I’d rather be out on the bike!!!!

By 9:30 am, I was off on the trip to Goondawindi. It really was a beautiful day, no wind to speak of, sunny but not hot, and for whatever reason – lighter traffic than yesterday which was great. I must admit, it had been a bit stressful yesterday with all the traffic thundering along!! Why it should be lighter on a Thursday I don't know - but I am very happy about it being so!!

About halfway between Moree and Goondiwindi I struck the first “roadworks” of the trip – I reckon that is amazing – 4000+ kms!!. There was a traffic signal controlled 2 km stretch of unsealed road, which was a rather rough shingle. The speed limit for cars was 40 kph – I pedalled hard and held on tight over the rough ride and maintained 30 kph – but I did upset a truckie who didn’t have the patience to drive that 2 kms at 30 kph. He tooted me  to move over I think – but as I would have had to cross a heavily gravelled piece of road – which I would probably have fallen off doing – I just pedalled on along the tyre tracks as fast as I could!! Once clear of the roadworks I pulled off and stopped to let all traffic pass – he gave me a bit of a blast which I felt was a bit uncalled for – all the other motorists, including truckies just waved – oh well – in the big picture – I guess these things happen!!

This stretch of road, certainly was pretty flat, a few undulations but nothing significant. The road still had a good width shoulder most of the time, but broken road edges from the earlier flooding were abundant, so it was a pretty rough ride.

We stopped at Boggabilla which is the last town in NSW, but there was not a lot happening there. However, great delight for me between Boggabilla and Goondiwindi – a field of cotton that had not been harvested yet!! Now many of you may think this is nothing to get excited about – but – I have never seen a “ripe” field of cotton in my life, so I was tickled pink to see this field. That “field” went as far left, as far right and as far straight ahead as I could see – HUGE!! – I wonder how many reels of cotton a paddock like that would make??

I was only a few kms off Goondiwindi now – and I came to a brown “scenic” road sign which said  "Gunsynd Way - Goondiwindi 2 kms – truck limit 10t. That sounded perfect to me – so I went off the highway and took that route. It took me along a very attractive stretch of road to a smallish bridge across the McIntyre River (the NSW / Queensland boundary) and there was a statue to that mighty racehorse “Gunsynd”. The Visitor Information Centre was just around the corner, so I went in and checked out caravan parks in the area. I expected Pat to turn up at any moment – but 15 mins later – no sign. Ridiculously, when photographing the cotton fields, I had taken my mobile phone out of my pocket and put it in the van – so I couldn’t ring her!!!!

Here we were – close to the end of the journey and we had “lost” each other. I decided to bike past the closest caravan park in case she had gone directly in there. Nothing. I then decided to bike up and down the main street, convinced I would see the Jucy Penthouse – nothing!! I decided to head back to the border on the normal road as opposed to the scenic road – nothing!! Biked back into town – looked up the main street – nothing, - turned to the Visitor Information Centre – and how pleased I was to see Jucy Lucy!!!!!!!!

“Iris” at the Info Centre had told Pat I had been in – oh well – all a long story – Pat had been around all caravan parks looking for me etc etc – I was grotty – not only had I biked a lot of extra kms that day, but it was now over an hour since I had first arrived in "Gundy", so had lost valuable “recovery” time. Nothing a Sauvignon Blanc wouldn’t fix!!!! Lesson learned - should this happen again - stay at the Visitor Information Centre!!

Of the caravan parks in Goondiwindi – Pat selected the Gundy Star Caravan Park – as it had an Artesian Hot Pool. Bliss!!!!!!!!!!!!!!! – and what an extremely attractive park – lovely gardens and grounds, and super amenities. If any of you folk doing the Bicycle Queensland ride later this year want somewhere to stay before the start – this would be a perfect place!! The owners are great people too!!!!

Now – my third competition is ready to be contested – and it closes this Saturday. I wasn’t going to post todays ride “stats” cos I thought it woud be too much of a clue – but as todays ride includes a lot of ridiculous kms spent “looking” for each other – I still think you have a few hints – but there is still some leeway there – Good Luck!!!!

I am now feeling well rested after a spa, amply fed after a beautiful chicken meal, and well rehydrated following some Sauvignon Blanc – and hopefully I will sleep well tonight!!

I do need to bore you with more of the “mouse” saga.

Apparently, Goondiwindi has sold out of mouse-traps – as the “plague” is here too!!!!!

I had intended to buy a trap here as like other campers – we are still affected!! Pat had said to me if we get a trap what will we put on for bait!! My answer to that was – you choose – soap, plastic bags, the capital L off the Liquorland bag, or a bit of rubber off the end of my pencil. Since securely locking up all forms of food – this is what gets nibbled on overnight!!!

Just a quick "thanks" to everyone who has sent me emails and messages along the way. I really have appreciated getting them!! At times I have felt so far away and with so many kms to go. To know I was in your thoughts was great encouragement!! I will catch up and answer you all once I get home!!
The cyclist, passing a pedestrian crossing, runs into a man, and they both fall down. -”Geez, are you lucky.” The cyclist says. ”What do you mean by lucky ?” The pedestrian angrily asks. “I got hurt really bad.” ”Ah, you're lucky because I recently lost my license. I usually drive a bus.”