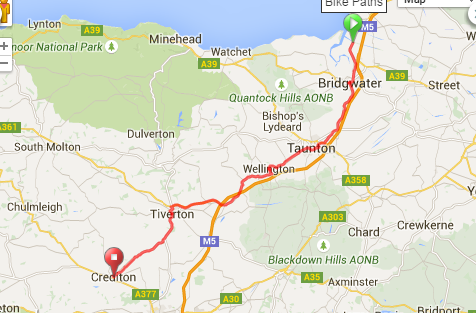 I had been pleased with the progress I made yesterday – but realised the days of flat to rolling countryside were pretty much over. Today there would be hills, and a particularly big one near the end of the day!! On paper it looked fairly straight forward and when other B & B guests asked which way I was going I chirped “from here to – Bridgwater – Taunton – Wellington – Tiverton – Crediton”.

I was on my way straight after big breakfast while Pat headed back to an ASDA superstore we had passed late yesterday to stock up on fresh fruit supplies. Strawberries here are excellent at the moment - oh that's right - almost Wimbledon time!! It is definitely warmer here as we head south and it was very pleasant cycling along the first flat 10 kms of the day. It is really beautiful productive farmland, and lots of BIG tractors were overtaking me!

Bridgwater came up very quickly and I was struck with an enormous distribution centre that the Morrison supermarket chain has here. It was on the left hand side of me for a considerable distance – HUGE! According to roadside signage, Bridgwater Council had encouraged this development as a big business and employer for the area. Handiness to the M5 would have been a big plus!

Before too long I was through the town of Taunton and on the outskirts of Wellington. I think my average speed was quite a bit higher than any other day and yet it had seemed easy!! The hills around the 50km mark hadn’t seemed to bad at all!! Maybe I should have got that degreaser earlier!! The day was going fabulously. While taking my “fresh fruit” break and studying the map I decided to take the A396 and by-pass Tiverton and head to Bickleigh on the River Exe. By then we could have a late morning tea / early lunch and I would only have about 16 hilly kms to get to Crediton.

It continued to be a nice ride all the way to Bickleigh. Beside the M5 for a lot of the road and crossed over it and back, and over again before heading more west to Bickleigh. At Tiverton I saw a sign saying a road diversion in place, but the names didn’t mean anything to me so I continued along my way. I had actually past several of these from time to time throughout the entire journey but none had affected my ride. I continued to Bickleigh – and found signs seemingly pointing in all directions saying that the road I had planned to take - the B3072 is closed and "diversions" were in place. Take whatever diversion you want it seemed!

Oh dear – what do I do?? Well first of all - Bickleigh is a VERY attractive spot and has two beautiful Pubs on the river banks - so the first decision was to get a coffee and some food, enjoy the surroundings and "think" on it!

Asking various people gave us all sorts of different options and opinions! Many locals said they didn't know what was going on it was only closed the day before!! The most popular one offered was to go down to Exeter and across which appeared to be about 35 kms on busy roads. I decided that maybe a bike could get through the "road closed" section and I would give that a go while Pat drove the long way. People still seemed to be able to visit the Bickleigh Castle - so I thought I would ask a car coming out of that short section of road for advice.

Luckily for me it was a "local" I chose. She was cursing the closure as she lived just beyond the section where the road was being dug up. She explained how we could get through warning Pat that it was a very narrow section of road - to drive slowly and be prepared to reverse!! Also warning me that it would be much hillier than I had anticipated. Oh well - I still thought I’d rather give this a go than go via Exeter! First left, then first right the lady had said - and if you miss either of them it will be a nightmare!! The road narrowed - one car width only - spotted and took the first left, but were unsure if the first right was a road, or a driveway into someone's place!! Managed to find someone home near the "road/driveway" and he confirmed it was in fact the road we needed.

Pat went on ahead. My progress was very slow - the hills were STEEP, and it was impossible to get any speed up going downhill for blind bends and the possibility of tractors or cars coming towards me. Whenever a car came up behind me, I had to stop, back my backside into the stone wall which had a foot of 2 foot high stinging nettles next to the road, pull Finn in really close to me, and they would inch on by. All very cheerily done with lots of waves and smiles – and grimaces from the nettle stings!!

It seemed like ages and it had been necessary to have a couple of walks up the very steep parts but I eventually caught up with Pat where this “track” rejoined the B3072 beyond the roadworks. I have subsequently tried to find this road on ridewithgps.com and googlemaps – but it doesn’t seem to exist!!

A couple more rideable hills and into Crediton. What looked at one stage like a 2:00 pm finish at the latest had ended up a 4:30 pm finish!! I hadn’t booked accommodation here, but fortunately Pat had found a nice B & B so I was able to shower and crash!!!

It was both an exciting and sad feeling that I was now only about 200 kms from Land’s End!! 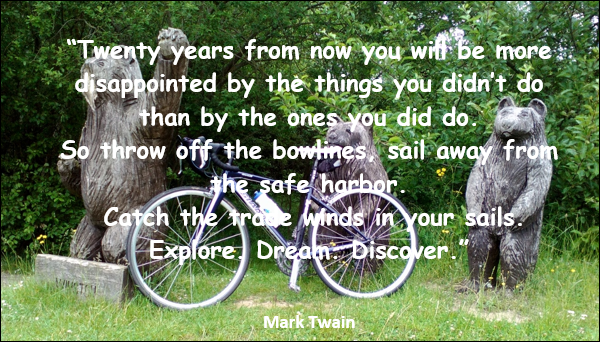