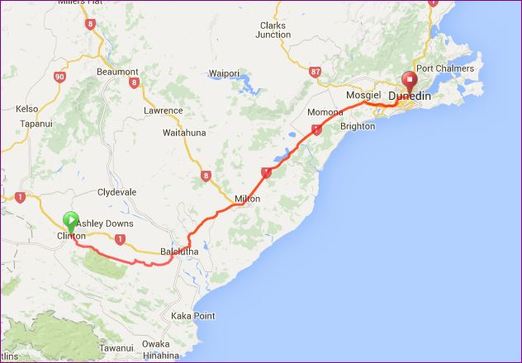 A pretty “jagged” looking elevation map today which will introduce us to some real New Zealand “rolling” country!!  Looks to me like we have three pretty good climbs today (as well as some nice downhills). The first at about the 30 km mark and 2 more in the last 20 kms should see us earn a cold drink and a good meal!!

Today we will pass through Balclutha – 30 kms from Clinton - population – 4200 and through the very fertile farming area around the Clutha River. The Clutha carries the largest volume of water of any river in the country and is spanned by a concrete bridge with six arches that was built in 1935.

We will pass through small towns of Milton, Waihola and Mosgiel before arriving in Dunedin for the night.

Dunedin – population 120,000, is the South Island’s second largest city and is located at the head of a large harbour on the Otago Peninsula. Although its population has been overtaken by some North Island cities, it is considered one of the country's four main centres for its nationally important history, as well as its prominence within Otago and the South Island. Dunedin is a university city with a large academic population fostering its special character.

For anyone wanting a challenge – Baldwin Street – is known as the steepest street in the world – we will visit it – and anyone is welcome to try riding it!!! I’ll be the photographer!!
REVIEW:-

The plan is for 8:00 am starts each riding day - so we were all up and ready to go on a crisp, dry morning, about to start day 2! First aim was the 30 kms through to Balclutha - off we went, up and down the rolling countryside, lovely views, beautiful scenes. Unfortunately, Don's bike developed some strange sounds which became particularly loud on the downhills, and, of course, this caused some concern! At one stage, he stopped to try to investigate the problem, confusion between going and stopping occurred, and Annie's foot slipped into the cleat when it wasn't supposed to - and the first little "fall" of the ride occurred. Sorry Annie - but glad it was at zero speed and no damage was done!! We discovered there was a bike shop in town, so we headed directly for it, and whilst Don stayed with the bike, we headed up the street to a coffee bar - Pat with our NZGCF collection box in hand!

Unfortunately the noise could not be reproduced - so we continued on - across the swiftly flowing Clutha River heading for Milton. The "noise" returned so it was necessary for Don to take extra care on the downhills. The wind, which was southerly and helpful turned to a swirling south-westerly and became less and less friendly as the day wore on. Very brief stop in Milton and we decided to keep on going to Lake Waihola for lunch.

Just before Waihola was this cute fence covered in shoes!! Of course a photo stop was in order and despite Pat's reluctance, but because of our insistence - she drove Jucy onto the lush wet green grass for photo's (and to see if "Lucy" wanted to pick a new pair of shoes). Then the next unfortunate incident - we biked on - oblivious to the fact that Lucy didn't want to leave! We sat around waiting - and finally rang Pat to discover she was stuck! Luckily we were opposite a garage - so garage man to the rescue - back up the road, towed Lucy back onto the road - and we were away!

Lunch over at Waihola and now time to cruise towards Dunedin. The wind had risen considerably and made the rest of the ride a bit of a battle - certainly not a cruise! Reaching Mosgiel we had to take the Bike route into Dunedin city as we were not permitted on the motorway. Unfortunately it is NOT well marked - or - probably more to the point - somebody had taken great delight in turning a sign around! Three quarters of the way up a long hill the sign pointed down - so we followed it - grrrrrrrrrrrrrrrrr!! It did cause some confusion in our minds and at the confusing signpost - I decided to sit on the ground beside my bike! Second stack of the day!. Anyway - lots more hill climbing - and then those wonderful downhills before meandering through the Kaikorai Valley, seemingly flat until we had this massive descent into the centre of Dunedin. Traffic lights on downhills are a nightmare - so our brakes got a great workout!

Don headed to the bike shop while we continued to our motel for the night - 755 Regal Court Motel - for a very warm welcome by the owners Garry and Kathy - and a delightful basket from Zonta Dunedin!! A hot shower, followed by a "group" post ride glass of Toi Toi Sauvignon Blanc with cheese and bikkies from the basket improved our tired moods no end!

It was a long day, the winds were a battle, we lost time due to bike problems, van "parking" issue and changed sign-posts - but we survived!