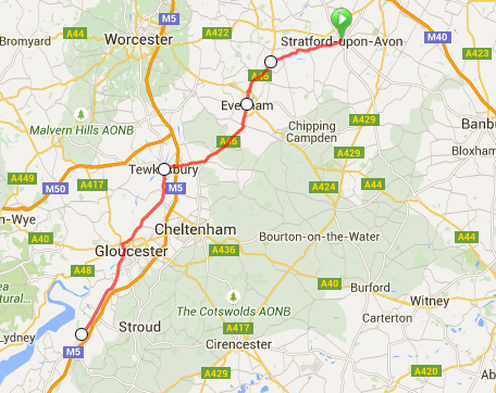 One could certainly spend more time in a place like Stratford-upon-Avon that is for sure – but the show must go on!! I am loving the elevation profiles at the moment. The highest point today was 70 metres, and it only required a little bit of extra effort to get up the couple of small hills to that height.

The countryside is beautiful and I can't explain the joy of cycling through such areas. Every sight, sound and smell (most of the time) can be enjoyed. I wasn’t sure where I would end up today – with yesterday’s longer distance completed all days from now on will be different from my original "plan".

We studied the map before setting off and it looked quite equal distances to Evesham, on to Tewkesbury and then on to Gloucester. If all was going well when I reached Gloucester we would decide upon a stop point for the day.

It was a truly beautiful ride across to Evesham. I went on the B439 all the way whereas Pat nipped on to the A46 and therefore by-passed this town. It was a shame as it was a very attractive place with good wide streets and very pretty gardens and hanging baskets. They are looking a treat at his time of the year.

Our first meet up stop for the day was planned to be Tewkesbury. Between Evesham and Tewkesbury I took the A46 and was surprised at how little traffic was on this stretch of road. I felt sure there would be more. Along with the drivers being so careful of cyclists it makes cycling here a joy. I think it is right to say that I am in the area called “The Cotswolds”, and if I am not already in Gloucestershire – I soon will be. It is very attractive rolling farmland, several beautiful thatched houses, stately homes with huge gardens – all very pretty.

I crossed the M5 just short of Tewkesbury and obviously that was the road all the traffic was on - whoosh, whoosh, whoosh – 3 lanes in each direction charging along. I was able to observe how everyone obeys that keep to the left rule and there is none of the crazy overtaking on inside lanes. Much more orderly!! Trucks all keep in the left hand lane too unless overtaking when they move out to the centre lane but no further. So sensible!!

After a short stretch of road (not sure what number) I hooked left onto the A38 and basically looped around Tewkesbury arriving at the southern end where Pat was parked. It had become quite hot, so a refill of my water bottle was necessary before pressing on to Gloucester – this cathedral city would be the largest urban area of the day. I wanted to bike right through the city so agreed to meet Pat on the south-side “somewhere”.

This is a very attractive area - and it is worth noting - that on our way back to Manchester after the ride we spent a couple of days at Tewkesbury. Pat got to play bowls at the Tewkesbury Bowls Club who were most hospitable. Another chance to get to use her Taylor Bowls again!! But these greens were something else!! She has been wondering why they were playing such short ends when watching the previous afternoon - and when she rolled her first bowl - she found out why!! They were VERY heavy, and it seemed the greens must have been sprayed recently as some sticky substance seemed to be gather on the bowls. Great effort was required, and while a very picturesque setting, I don't think Pat enjoyed the greens too much - and the subsequent need to give her bowls a thorough clean that night. Oh well - all experience!!

I was going to follow the A38 all the way – Pat on the other-hand would need to get on the Gloucester ring-road to get around the city. The A38 ran almost parallel to the M5 which suited me fine. I really did expect these “A” roads to be much busier and I keep pinching myself that it is such light traffic. On the other hand, I could hear the busy, fast M5 nearby and was pleased it had stolen all the traffic off "my" road!

Gloucester was a busy city, and no wonder there was a ring road as a long section of the middle is walking traffic only. The Town Cryer was in action – although dressed in army gear as it was “Army Day” today – apparently! I asked him directions south which he kindly gave, even though he said I should stay and enjoy the city! I am sure there is a lot of historical interest in this city on the banks of the Severn River. Once through the main part of the town I had to ride through a very unattractive industrial part. I think it looked like it could have been railway workshops – but much of the area was very derelict.

The road became increasingly busy, so I sensed I must be near a "M5" off/on ramp. The road had become dual carriageway, but as they were mowing and line-trimming the median strip the centre lane was closed. As two lanes became one, the traffic queues were long and slow – but thankfully a small shoulder here let me continue along uninterrupted. My phone rang – it had to be Pat – whoops – somehow she had managed to get on the M5 whilst negotiating the Gloucester City Ring Road and exit 13 that she had taken was some distance south. She said she would travel back – but we agreed that she not come too far back as these traffic jams were bad. I had about 2 kms to go to exit 12 - so we would meet near there.

We found each other and had a bite to eat and a coffee at a roadside café near an equestrian centre where Pat had been watching events take place while waiting for me. I felt I had another hour’s riding in me so we spotted a place named “Cambridge” on the map and decided to head for that. We hoped there would be a B&B or a pub there for the night.

More easy riding and the kms skipped by - it didn’t seem to take too long at all and I was in Cambridge. This isn’t the main Cambridge in England and in fact is VERY small. There was a pub – but it was being renovated and their accommodation wing was closed. It will look lovely when it is finished. They checked on one of their nearby pubs – "The Bell" at Frampton-on-Severn - who had rooms available, so we back-tracked a bit and headed west.

This was a wonderful stop – the pub was on the Village Green. There are often cricket matches played and I am sure a great family day out is had by all. The pub had a little animal farm and a nice children’s play area. For some reason we both felt like an ice-cream. Amazingly, although there were 2 pubs, a hair-dresser a large school, a busy canal network etc – there was no general store. How disappointing!! The ice-cream crave had to be replaced by a "pint" with our dinner at the pub.