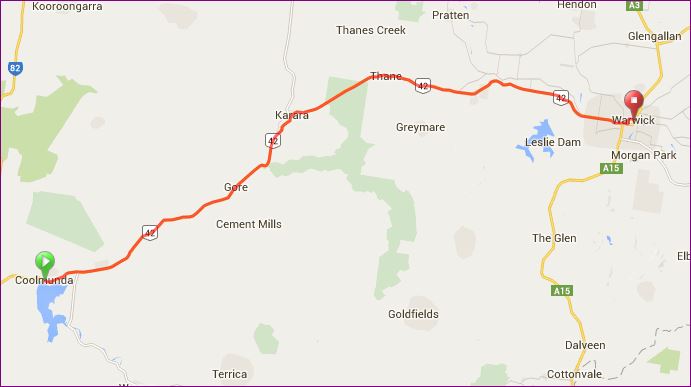 A serious day of hill-climbing (the Great Dividing Range) today as I head towards Warwick along the Cunningham HIghway (42).

Warwick is surrounded by fertile farmlands and the rolling hills of the Great Dividing Range. The Town is strategically located at the junction of major highways from Melbourne, Sydney and Brisbane. It is on the Condamine River.

The area was discovered in 1827 by explorer Allan Cunningham and settled in 1840 by the Leslie brothers who began the tradition of the pastoralist, sheep and wool industry in Queensland.

Warwick Shire boasts some of Queensland's finest historical sandstone buildings, which were made from local sandstone and now stand today as reminders of their pioneering past.

Known as the 'Rose and Rodeo City', Warwick hosts one of Australia's oldest and most famous rodeos each year in October. The Warwick Rodeo can trace its roots back to 1857 where records indicate the first professional buckjumping contest. Each year riders from around the nation compete for their share of the prize money.

Another beautiful morning even though very crisp!! The camp owner came over to see us off – and as we had been “too lazy” the day before to go down to the lake side, he suggested we start the day by going to the “boat ramp” which was at the side of the dam. I am glad we did – what a beautiful spot!! Plenty of people were already out fishing – it all looked very tranquil!!

Back out to the road and on my way to Warwick!! I knew from my elevation chart it would be a lot of climbing – even though several motorists had said it was pretty flat all the way!! I should be used to that by now!!

It was pretty tiring, quite a bit of pothole patching was going on so there were a lot of rough patches along the way. Fortunately the traffic was pretty light – not so many trucks on the move on a Saturday morning!!

I had to take an extra break as the hills were tough on the old legs, and I got pretty puffed!!

I took my last break with 33 kms to go to Warwick, and was making pretty hard work of it when I sensed a car slow down and pull up alongside of me. I sort of thought – what the heck – can’t be a cop, I’m certainly not speeding!!

The lady leaned out the window and said – “Hi – we’ve been following you on your website – we’ve come through from Nyngan!!” I found that amazing – and it really lifted my spirits incredibly. It certainly is a small world!

I giggled to myself as I past some large road signs – one said “Are we there yet?” Then the next said – “Only two hours to Brisbane” – if only!!!!!!! But it has been great to see the number of kilometres to go decreasing!!!!

Always fascinating the people you meet in the camps each night. Tonight one lady, I hope she doesn't mind me saying "an elderly" lady, asked me what sort of bike I was riding. I replied - a "Giant Avail", thinking it wouldn't mean much to her. Her eyes lit up "Oh Really" she said, "we used to own a bike shop in Townsville and when we got the dealership for Giant we were so thrilled - they are great bikes!!" How right she is!! Of course, further conversation flowed, and although they have sold the shop andretired to Bribie Island - she was well aware of Tom Wallace Cycles - in fact - almost buying that business at one stage!! It showed me that I shouldn't pre-judge "elderly" ladies knowledge of bikes!!

I have to admit – my legs are getting a bit weary now, and my “Madura Pass” has not been the best for the last day or so!!!!!! Just the day after day riding I guess.

Warwick is such a pretty town – the flowers are beautiful, and I will take time tomorrow on the way out to photograph some. They call it “Warwick – Rose Town” – but there are plenty of other blooms while the roses are out of season!!

I am so close now to the end, in many ways I can’t believe it - and I certainly don't want something to go wrong at this stage! Please let there be just three more days of fine weather!!
The bicycle is the most civilized conveyance known to man. Other forms of transport grow daily more nightmarish. Only the bicycle remains pure in heart.
Iris Murdoch - The Red and the Green.