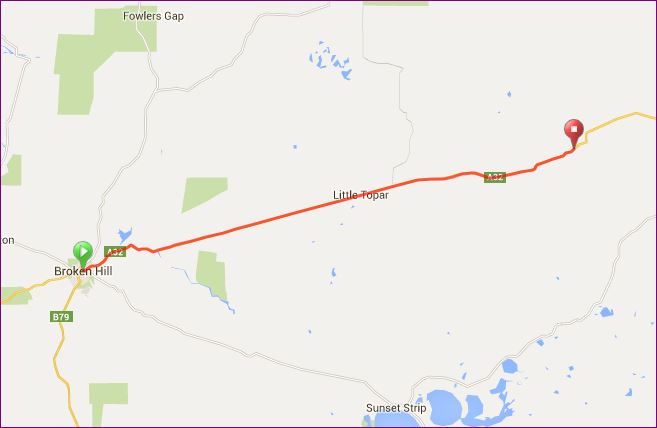 So it is Easter Sunday. A holiday!! But I will head off from Broken Hill, along the Barrier Highway it will be pretty barren I suspect!!

My maps show a place named Little Topar - I think here - the only facility we will find is - you guessed it - a "roadhouse".In the light of information we have received regarding staying in Wilcannia, we will have to check out the possibility of a "free-camp". If the ride goes well we should be in Little Topar by late morning.

Tonight is another “free park”. The plan to stop this night at Little Topar was changed. Somehow my route planning is quite astray for this day!!  When I arrived at Little Topar this morning, my odometer only showed 82 kms travelled – so a meeting was held and an executive decision made to press on another 46 kms to the first rest area. Lunch was duly taken here, and even though we have “lost” half an hour today due to moving back into AEST it seems too early in the day to “knock off”. So another meeting, and another executive decision - continue another 14 kms to the next Rest Area.

So here I sit, in the van, cos guess what – flies!!!!!!!!!!!!!!! The sign to my right shows 60 kms to Wilcannia. That seems good “striking” distance for tomorrow when hopefully I will get to Wilcannia, and then the same distance further on.

Both before I left, and during the trip, we have been warned not to take my planned stop in Wilcannia, so these slight re-shuffles to the schedule have really taken that advice into consideration. I guess if things did go wrong there with all the warnings we have had, we would have looked idiots.

So Dolo Hill Rest Area – is a sealed, off road area with a BBQ, picnic table, toilets, water tap, lights and flies! Well - there is no water coming from the tap, the lights don't work, the BBQ looks pretty suss, we can't sit at the table outside because of the flies, and just as well we carry our own toilet paper as there was none of that for the "long-drop".

At this stage we are the only ones here, but I imagine (hope) this will change as evening sets in. The "grey nomads" seem to start to settle for the evening anywhere between 3 and 6:00 pm, so there is still time for company to arrive!! If no-one else arrives, the 5 wood and the 5 iron may be brought from the Penthouse into the van!! No, perhaps the putter would be better than a 5 iron.

As far as I look to the east, south and north - it is flat land. Behind me to the west is the smallish rise of Dolo Hill – we are about two thirds of the way up it.

The journey today has seen an abundance of livestock in this area – even though much of it is evidenced by the large amount of deadstock on the road (‘roos and foxes). Several sightings of emu’s, sheep and goats. Again, grass and scrubby bushy growth is prolific, there has indeed been rainfall here to change what is normally very barren parts.

The bird-life on the “lake” near the Little Topar Hotel was phenomenal, thousands of birds!!

Since arriving here - there has been a steady stream of motorists stopping at Dolo Hill to take a break in their journey, use the toilet, feed the horse (1), and have a smoke and a chat - but they have all continued on their way!

The horse was called “Grasshopper” a 4yo grey mare – a quarterhorse, stock horse, thoroughbred mixture who was on her way home from a successful gymkhana at White Cliffs where she “had won enough to cover her petrol money”. It seemed that barrel racing was her forte. They still had another 600 kms to travel to somewhere just out of Mildura!! I reckon she is going to munch away on her lucerne hay until she gets there – she seemed a very contented traveller.

Another motorist who had travelled through Wilcannia spoke of not only State Police cars there, but also Federal Police – so that confirms that our changes have probably been the best thing!! Earlier in the day I had been overtaken by a red police car just out of Broken Hill – it seems Wilcannia was its destination.

Despite wonderful blue skies and a bright sunny day here today (plus a nice side/tail wind), more evidence of rain in this area is seen by the breaking away of the road shoulder at frequent intervals. There is a lot of patching to be done!!!!

I now realise how spoilt I was on the Western Australian roads. The surfaces there were super smooth, the roads and shoulder nice and wide – a joy to ride along, and I felt so safe the times I decided to pedal down hill as fast as I could to see what speeds I could reach!!

When I crossed into South Australia there was a considerable difference in quality of road surface and width of road shoulder. The roads were quite “patchy” many parts with a coarse rough seal, many bumps, washouts etc. In fact the constant road shudder through the handlebars did cause some wrist and hand pain despite wearing wonderfully padded cycling gloves. Sometimes it was so bad, my fingers and hands seemed to go numb. I think Pat got sick of my first words at the end of a days ride – “bloody South Australian roads”.

As I neared the NSW border, I started to get quite excited that the road surfaces would improve. As a Queenslander, all I seem to hear from NSW and Vic folk is how bad our roads are – so I was looking forward to these “wonderful” NSW roads. So far I have travelled almost 200 kms into NSW, and have not found them yet!! Maybe tomorrow!!

But for now – time for another marshmallow Easter Egg and some sleep!!! No-one else has decided to stay overnight here – so the 5 wood and putter are nearby!!

It is an amazingly "starry" night tonight. Maybe I just don't notice these things at home - but I can't believe how clear the sky is, how vast, and millions and millions of stars!! 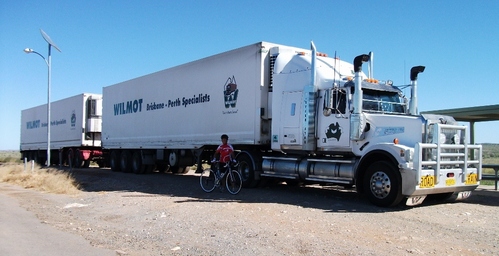 This seems an easier way between Perth and Brisbane!!
Let me tell you what I think of bicycling.
I think it has done more to emancipate women than anything else in the world.
It gives women a feeling of freedom and self—reliance. I stand and rejoice every time I see a woman ride by on a wheel...the picture of free, untrammeled womanhood.
Susan B. Anthony