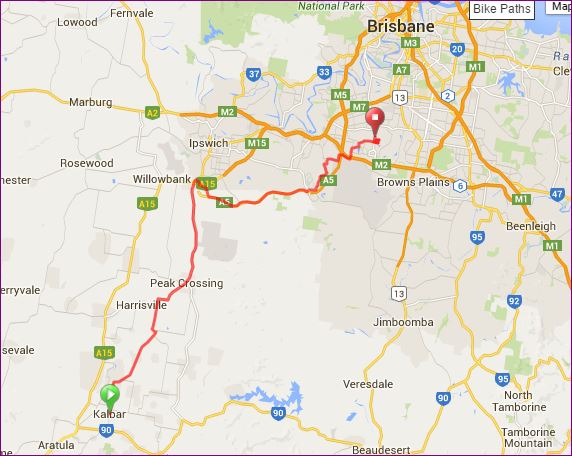 Starting from the small rural township of Kalbar, I will head towards Ipswich today and then bear in an easterly direction to the suburb of Doolandella.

Ipswich is a suburb and a major urban centre of metropolitan Brisbane Queensland, Australia approximately 40 kilometres (25 mi) south-west of the Brisbane CBD in South East Queensland. The City of Ipswich including surrounding suburbs has an estimated population of 165,000.

Once a large independent city, Ipswich and its suburbs were absorbed by Brisbane's south west urban sprawl along the railway and freeway corridors during the mid 20th century. However the city has retained its municipal status along with it an independent history and culture. The city is situated on the Bremer River and the urban area extends along the river's hilly valley. Ipswich is a major commercial and industrial area, with the Ipswich CBD one of the largest activity centres outside of central Brisbane. It is currently undergoing major transit oriented urban renewal which was first planned in the Ipswich Regional Centre Strategy.

Ipswich was named in 1843 after the town of Ipswich, England. It was first settled in 1827 after limestone was mined there, proclaimed a municipality in 1858 and a city in 1904.

I was just thankful, that this was the first day of rain, - I couldn't really complain - I flew to Perth to start this journey on the 28th March and here we are - 9th May and the first rain!! The saddest thing was that Peter and Liz called in and pulled out of riding with me. I can't blame them as it was most unpleasant!!

My original plan was to leave with them at 12 noon - but with this change, I waited a couple of hours to see if the rain would lift - as it happened, it didn't really - there was nothing else to do but push on regardless. I opted to take the route along country roads instead of going back out on to the highway. I can see that in nice weather it would have been a lovely ride - although it was somewhat hillier than I had expected through to Peak Crossing. As cars overtook or met me - whoosh - I was covered in spray, and in some cases quite a shower is they went through large puddles!!

A brief stop at the small town, Peak Crossing, then on to Yamanto where we would plot our course across to our friends place at Doolandella for the night.

I couldn't help but stop and get a photograph when I came across the roadsign signalling "Noonans Lane" - Liz - I was cursing you when I was riding up the hills - but I would never have seen this if you hadn't suggested this route - so all is forgiven!!!!!!

At Yamanto, a quick stop for lunch and then my planned route along the Centenary Highway was scuttled when I came to large signs saying Pedestrians, Bicycles, Tractors Prohibited on the Motorway!!!!! Not impressed, as I was sure I had heard about people cycling along the Centenary Highway - and it looked a nice flat route to Doolandella. I suggested taking the gamble and just going for it - but then - I don't want to fall foul of the law - and particularly when really everything else had gone so well for the trip.

So we negotiated a route twisting and turning through the back streets of Ipswich, up and down Redbank Plains Road, but somewhere around Bellbird, where unknown to each other - Pat and I headed off in different directions. (No, neither of us were lost!!!!) After going up and down a few more hills, I gave up the idea of turning back (I'd had enough of hills by now) - and continued heading for Springfield. I spotted a Police Station - so thought it wise to pop in and ask directions to Forest Lake. "Through 2 sets of lights, veer onto the Centenary Highway then take the Forest Lake exit" the police officer (who looked about 15 years old) advised me. Of course - even though I am standing there in my bike helmet and lycra gear - I had to say - but I am on a bike - can I go on the Centenary Highway? "Ummmm" was his reply, "well I've seen people cycling there so I guess you are" - that was good enough for me - the "law" had given me permission - so off I went!!

Through the two sets of lights, onto the Centenary Highway - and no signs saying I could not - yippee!! It was a pretty busy road traffic wise and good that I was still wearing my hi-vis shower proof jacket that was now completely soaked through. At one stage the road seemed to become some other type of freeway (beats me) and there was a sign saying no pedestrians or tractors (no mention of bicycles) - so I continued along not so merrily as the traffic volume was heavier still. Much to my relief it was not too far before the Forest Lake exit sign appeared - I was able to be back in my comfort zone as I knew my way from there!!!!

Meanwhile, Pat was ploughing her way through the Goodna area, I guess somewhat annoyed at missing out on a planned coffee stop we were going to have!!! Isn't it just the way - the couple of times on the journey that I forgot to take my phone with me - things went wrong!! I hadn't exactly "forgotten" to take my phone today though - it was just that with all the rain, the wet weather gear etc - I "chose" (very stupidly) not to take it!!!!!! Them's the breaks!!!!

Anyway it wasn't too long before we were all at Blunder Road enjoying the wonderful hospitality of Colin, Deirdre and Jake - sharing travellers tales, glasses of wine and a sumptuous chicken meal - sitting at a dining table!!!!!!!!! What a lovely relaxing way to spend the evening before the final day of riding!! Thanks Colin and Deirdre!!
A little boy out riding his bicycle knocked down an old lady. She was a bit shaken, but got up, dusted herself off, then turned to the little boy and said, Don’t you know how to ride a bike?
Yes, he answered, but I don’t know how to ring the bell yet.