All funds raised during my ride across Australia went to either the Australian or New Zealand Heart Foundation depending on the donor’s wish.
It was a thrill to be named Best Individual Fund-raiser for 2011 by the Queensland Branch of the Australian Heart Foundation.
​Special thanks to EVERYONE who supported my ride.
Day 22 - April 21st, 2011
Peterborough (SA) to Olary (SA)
170.3 kms. 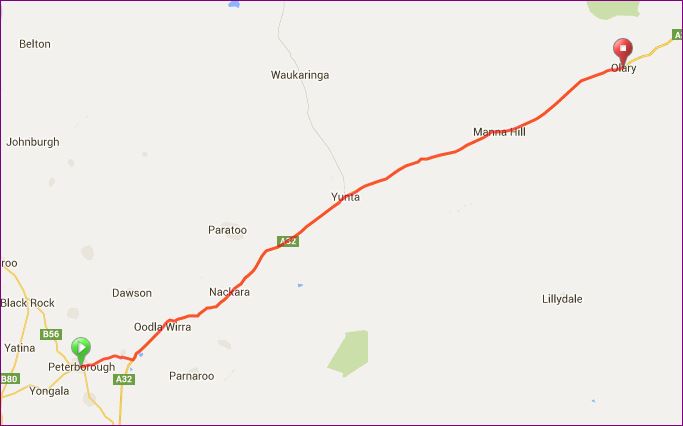 A few kilometres out of Peterborough and we will join the Barrier Highway - 32. We get to descend a bit today after the climbs of yesterday - I am sure the downhill sections will be a welcome relief!!

Manna Hill is a locality on the Barrier Highway (A32 - which I will follow until Nyngan, NSW) in east South Australia, in fact one of the easternmost localities in South Australia. I don't think there will be a lot at Manna Hill - but with a bit of luck, there could be a "roadhouse".

It had been a very quiet stay next to “Victoria Park”. Peterborough is definitely a town for those interested in trains, steam trains in particular. When I biked into the town, I got photographed next to the town sign with the cute little train model. The lady at the Visitor Information Centre – which is actually a train carriage and looks really good, informed me that there was a train at each entrance to the town – so 4 in total. Not being that keen on trains – I only took in the east and west trains and looked at pictures of the north and south ones.

The town itself seems devoid of shop signs, I biked the main street twice and Pat drove it once before we asked at the service station if there was a grocery store here! “Opposite the Post Office” was his reply – now that was one sign we had seen  - finding that then made finding the grocery store possible!!

Todays ride went like the elevation chart shows and felt pretty much downhill all the way with only a couple of exceptions! A pretty strong tail wind made for great riding.

Once we had joined the main Adelaide to Broken Hill road we soon went through Oodla Wirra which is the quarantine inspection point for those travelling south – nothing for those heading north. Apart from a couple of drink stops our first major stop was at Yunta – 90 kms travelled.

Most of the way we were alongside the railway line, and apart from a couple of goods trains, the Indian-Pacific (Sydney to Perth) train also went through and the driver gave me a very friendly “toot toot”. I reached Manna Hill in good time, very good time – and as I had sort of feared – there was no caravan park here. Our guide book showed 2 free parks not far along, and another at the Olary Hotel – where the stipulation was – "come in and have a beer and you can camp for free"!! We checked out the 2 free camps as we progressed, and decided they would be too noisy – between the railway line and the road.

The decision was made to push on for Olary. It would make a big day, but also shorten the “Good Friday” ride into Broken Hill.

Two great sightings on this 37 km stretch of road – a flock of emu’s wandering across the road – and then – another Jucy came towards us. It was a real “sister-van” a Jucy Grande heading south. Toot-toots, waves, light flashing, smiles and we headed along our merry way in opposite directions.

So at the end of a long day cycling - we have ended up camping between the railway line and the main road and opposite the Olary Hotel – I am sure it will be quiet!!!!!!!!!!!

We’ve paid our “camp fees” by enjoying a beer, as well as upsetting the publican’s 2 blue heelers by sitting in their chairs at the front of the pub. You should have seen the looks they gave us!!
The bicycle is just as good company as most husbands and, when it gets old and shabby, a woman can dispose of it and get a new one without shocking the entire community.
Ann Strong - Minneapolis Tribune, 1895.