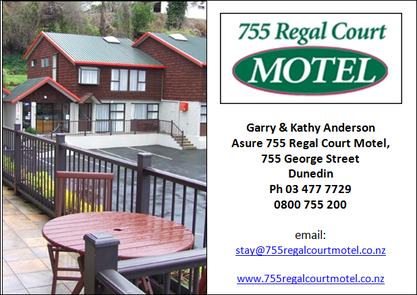 Interesting New Zealand facts:
Dunedin is home to New Zealand’s oldest university, first newspaper and first botanic gardens.
Gisborne is the first major city in the world to see the sunrise. It is 496.3kilometres away from the International Date Line. 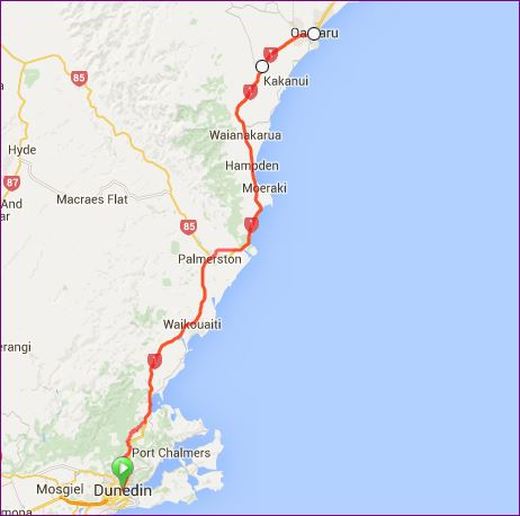 Heading north now up the eastern coast of the South Island. Day three sees us starting out with 12 km of climbing from sea level to 378 metres!! Maybe not a very fast km rate through this part!! A great downhills section after that before another climb to get to 226 metres. After the first 30 kms the rest of the day doesn’t seem too bad!!

We will remain in the Otago province today and pass through  the towns of Waikouaiti , Palmerston, Moeraki and Hampden. There may be a coastal short-cut through Kakanui to Oamaru – but we’ll check that out with cycling locals first!

Oamaru – population 12,000 has many lovely buildings made from local quarried limestone. Some of this stone was brought to Brisbane and is a feature in many early buildings there.

A colony of little blue penguins lives on the harbour, and a colony of yellow-eyed penguins just south of the town attracts ecotourists.  There is also a Penny-farthing Museum here that I hope to visit, and an annual Penny-farthing convention is held here.
REVIEW:-

Up bright and early today and headed to "look" at Baldwin Street - the steepest Street in the world! Nobody was game to try so we continued on our way! Now this is a day that the elevation map had me really worried about - and how accurate it was! We were not allowed to cycle on the motorway out of Dunedin so had to go "over" Mt Cargill. WOW - and that wasn't just the views!! Definitely found out why bicycles are called "push-bikes" - cos I found it impossible to keep cycling up the entire "mountain". We stopped for regular photo's as the views back over Dunedin were stunning - only to find that round a few more corners and up a few more climbs and the views got better and better!! And when finally at the top - amazing views of the harbour to our right. Then for the downhill swoop - the reward for all that climbing. This is where we really felt what the temperature actually was as the cold air cut through all the layers we had on! It was so exhilarating - but for me - it was brought to an abrupt halt three-quarters of the way down when I punctured - yes - the first puncture of the trip and I had to get it. Luckily for me it was a slow puncture and not a "blow-out" as the speeds we were whizzing downhill at could have seen a very nasty crash! Work for the support vehicle!!!! Pat to the rescue while I looked on - sort of hopelessly - well - absolutely hopelessly - I just can't get the hang of fixing punctures!! - But - my turn to cause an "outage" in our progress!

At Waitati we rejoined State Highway 1 - and with this came the 3 kilometre loooooong climb! At the top - 29 kms covered in the first 2 hours - not a great average speed! We headed on for Waikouaiti - but just short of the town was a lovely rest area with a coffee van - "Bean Around The Block" - and many "white-baiters" in action. We bought coffee and chatted with the local fishers - whitebait was on sale at $80 per kg which I was assured is the cheapest in the country! Who am I to know - I believed them - but can't stand the thought of eating with all those eyes looking at me!

Palmerston was a nice town - and new "loo's" that tell us what to do, and play music while we are doing it - and then - put a tune into your head that you can't get rid of for the rest of the day!! We are becoming quite conversant with how these loo's work!!

Onwards - great views, lovely countryside and next stop was Moeraki Boulders for lunch. While biking the temperature seemed great - when we stopped - the wind bit! We observed the boulders( from the warmth of the tourist shop - and then continued - as the weather started to look ore and more gloomy.

With approx 20 kms to go to Oamaru, the rain started. Margie was lucky - she was collected by a friend not long after and spent the night with them. Don, Annie and I continued - and he rain - didn't become heavier - it just became hail!! I hadn't ridden in hail before - and when it hit your face - wow - it stung!! It wasn't long before the fingers started to freeze, the shoes began to leak, and toes ceased to send messages to the brain. I started to think hypothermia!!

Seeing the slow down sign for Oamaru was a huge relief!! Down the hill, asked a jogger to confirm we were on track to the Top 10 Oamaru Holiday Park and it felt so good to pull into base for the night. Thanks guys at the Top10 Oamaru Holiday Park - us cyclists couldn't wait to get into a hot shower to thaw out our frozen extremities!!

Whilst I was in the shower, Mary McRae, President of Zonta Oamaru, delivered a wonderful package of locally made cheeses, biscuits, and another Marlborough Sauvignon Blanc! These ladies sure do know what cyclists need!!

Showered, wined and dined - we crashed!!