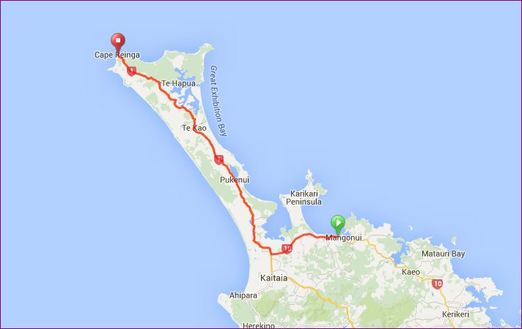 And now – the final day!! After about 30 kms of undulating riding, we will rejoin SH1 at the town of Awanui. From here – it is a simple matter of following State Highway 1 –until we can’t go any further!!

We get to the lighthouse – and we are there – done it!!!!!
Cycled the length of New Zealand!!
Time to celebrate!!

The morning was brighter and we could look out over the beautiful Coopers Beach. Our gear had pretty much dried out overnight and we were all thinking - wow - this is the last day of our journey!!

We welcomed local retired teacher/retired bookshop owner Alan Gow, who arrived to ride part of the journey with us. Alan was hot off running the Kerikeri Half-Marathon, but has recently obtained a bike and is moving into cycling as a form of cross-training.

We headed off, with a goal to get to Cape Reinga between 4:00 pm and 4:30 pm. - but as we have learnt with the previous 20 days - it is quite dangerous to try and predict finishing times!!

First "stop" was scheduled for Awanui - about 28 kms away. We were straight into some hills which at the time we thought were quite big - haha! There was also a smattering of road-works along the way - very disappointing when you climb a hill, look forward to the reward of a downhill - only to be presented with a gravel section of road under repair!!. The "paparazzi" were out bright and early too - Shona and Irene popping up on various corners - camera's poised!!

A solitary cyclist came towards us - "is this the group Brenda is with" he called - he had heard my mother on Talk Back radio talking of our adventure. On quizzing mum later - she said she called Ewing Stephens between 2:00 and 3:00 AM - that cyclist must be an insomniac!!! But this sort of thing really buoys us along!!

We reached Awanui in good time - but I warned the "team" not to get too carried away with the sniff of the end - there was still 100 kms to go!! Shona and Irene joined us here - and when we reported that the cyclist we had met earlier had warned us to watch out for the logging trucks - Irene swung into action again - raced over to a parked logging truck and asked him to get on his RT and warn other truckies that we were on the road!! It is all these things that helped our journey so much, and we are very grateful for Irene's links within the trucking industry!!

Refuelled we headed on our way and besides another short "van stop" en route we didn't stop for coffee until near Houhora.

A further 12 kms up the road - we stopped at Ngataki School - I think pretty much the northernmost school in New Zealand. I don't know about the other riders, but for me this was one of the highlights of the trip. The entire school (I think about 23 students) were standing roadside as we approached waving and cheering. We stopped and answered questions and chatted with the lively interesting children. They touched our bikes, rang the bells, and seemed really interested in what we were doing. The photos of here are terrific memories!!

The Headmaster was very interesting, and he informed me he had cycled the area and that we had hills ahead!! At the time I just smiled - thinking that with what we had done to date - nothing would be a problem! (Foolish late in the ride thoughts!!)

On we rolled and yes, up and down some hills which we were coping with pretty well. The weather started to turn pretty lousy, low cloud, drizzle, rain showers. Another cyclist was spotted heading south. Despite our waves and "g'days" he just pedalled past without a smile on his face. Annie thought it was because he realised we were nearing the end of our ride - and he had only started his. He was loaded down carrying all his gear - quite a different "cadence" to us!! What I also realised - was that while the rain and sun weather God's hadn't been good to us - the wind God had and we had a very nice tail wind ....... so poor "Mr No-smile" was heading straight into a strong southerly!!

The hours were ticking by and so were the kilometres and we arrived at our "last stop" before the Cape - Waitiki Landing - 20 kms to go!! Our welcoming committee had started to arrive by now - and before we took off - we took bets on what time we would reach the Cape. As we had been averaging 19 - 20 kph an hour - most guessed about another hour. My brother quietly said - I think another hour and a half - and deep down - I thought then - "he knows something"!!

What transpired was, to me, the toughest 20 kms of the entire trip. Maybe there were those "almost there" mental games going on! The uphill climbs were steep, winding and extremely testing!! When I get spare time in the future, I am going to really analyse the elevations in this strip of road. There was nothing to do but sit down on the seat, engage the easiest possible gear and grind away. So close now - we would not give up!!! The kms ticked slowly by, the time ticked by, my legs were screaming and goodness only knows what my heart rate was! At the start of the trip, I would have found this impossible - but I know I had gained fitness and also toughened my mental attitude throughout the ride, and nothing was going to stop me now! At one stage low cloud came down and all we could see was the road ahead rising into the clouds!!

I had frequently been asked during the ride why I was going from south to north instead of north to south - and I had several reasons for my decision and I do believe - now that it is done - it was the right one - BUT it did pass through my mind during these last kilometres, that riding from Invercargill to Bluff for the last 20 kms would have been a whole lot easier than this final 20 kms!!

But - when I was thinking there was not another hill climb left in my legs - the round-about before the ascent to the parking lot at the Cape was in sight - unbelievable relief - and we joined together and rode to the top of New Zealand!!!!! ELATION!!!!!! It was about 5:15 pm - but we made it!

The cloud lifted as we got there, but the bitterly cold wind remained - but who cared!! The feelings of accomplishment and pride inside us all was unbelievable. We were welcomed by friends and family who had made the trip up to continue to support us and share the moment. That meant a lot.

It is a bit of a walk down to the lighthouse, but the path is great and we rode slowly down. All the other tourists became aware of what we had just completed. Pat carried the glasses (that Margie's husband Mal had brought) down to the lighthouse and we opened bottles of Toi Toi Sparkling Sauvignon Blanc and Toi Toi Sparkling Rose to celebrate our achievement - it was a terrific moment!!

When we made our way back up to the top, my sister presented us all with a wonderful memento of this journey - a framed montage of the journey - listing each of our daily destinations - some pictures - just a wonderful, and extremely thoughtful and generous gesture. It will hang in my house with great pride - to remind me of both the tough times and the great times that we had during this 21 days!!

Top marks to the way New Zealand maintains this area around Cape Reinga lighthouse. It is a fabulous place - and certainly should not be left off any visitor's list of places to visit. I hope all New Zealander's go there as well - they would be proud!! Well worth it!!

After photo's, celebratory drinks, changes into warm clothes etc - we farewelled Margie, as she was heading back to "the farm" at Okaihau with husband Mal. For the rest of us - it was back to Awanui for the night. As we drove back over the road we had ridden we were gob-smacked to think we had ridden these hills. Even in a car they seemed unbelievably steep - we certainly had conquered a monster!! The "Landrover" driven by my brother, took Annie, Don, myself, my mother and Cedric and Juliet down 90-mile beach, which is spectacular even if a little nerve-wracking when tales of cars being lost in quick-sand are related. Fortunately the tide had receded sufficiently for us to make the journey successfully and so complete the day in spectacular fashion. It was now getting dark, so we stayed at Awanui for the night - tired, but delighted!!

What a day - the completion - of a wonderful bike ride, an adventure in which so many people played key roles and helped us to achieve our dream. Very hard to thank everyone enough!!

I am sure the people I need to thank know who I mean - I feel very humble when people say to me - "WOW - you have ridden across Australia and now the length of New Zealand". Yes, it is true, I have - BUT without the support of so many special people - I'd still be sitting on my butt thinking "I wish" - instead - I can sit here and say - "I've done it"!!