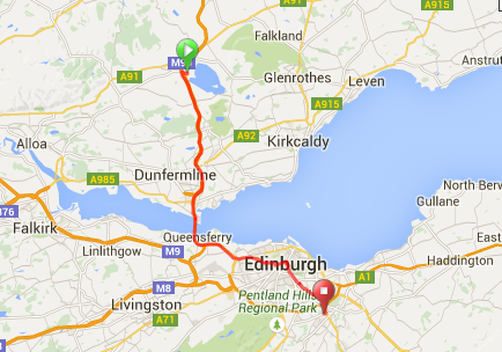 Before I set off this morning - special thanks to Isabella's grand-mother for supporting this ride by donating to the Fred Hollows Foundation. Isabella was born blind and with slight cerebral palsy. But, she is encouraged to be out and about and lead as normal a life as possible!!! When I think I have it hard on this ride - I know I have nothing to moan about!!! Top effort Isabella - you will star and motivate many!!!

Day 7 – here we go – and time for the city of Edinburgh!! I deliberately scheduled this to be on a Saturday, and a shortish day kilometre-wise knowing that (from experience) big cities can be buggers to get through!!! I was also hoping to take my time and enjoy the sights and sounds of firstly the Firth of Forth Bridge and then the city itself.

After cycling in shorts, a t-shirt and my sleeveless hi-viz for the last few days – it was definitely back into the jacket as the temperature was only supposed to get to 12 today and showers turning to rain in the afternoon. Winds were expected to be light (I was pleased about that with a long suspension bridge to cross) but getting stronger as the day went by. That was all true!! Not great biking weather really – but beyond my control!!

I had asked if we could have breakfast at 7:00 am thinking I could get a slightly earlier start and perhaps reach Edinburgh before too much Saturday traffic. When we reached the dining room it was completely dead – not a soul to be seen. It seemed as if we were the only people in the entire hotel!!! I decided to have a banana and head off – what a come-down breakfast wise after fully cooked Scottish breakfasts every other morning so far!!!!

Pat had arranged to pick up Pauline from her hotel (where she was enjoying a full breakfast) at 8:30 – and we would keep in contact by phone and probably meet up “near the A7 heading out of Edinburgh.

As it turned out – no one had turned up at the hotel before Pat went to fetch Pauline, and still nobody at 9:00 am as they passed back through. Feeling guilty that we needed to pay for our room, Pat left the money with the hairdresser opposite – and they continued on their way!! All very strange!! I hope the money got to the right place eventually!!

My route from Kinross to the bridge was an undulating ride through lovely rich Scottish farming countryside and was very pleasant. There were great views of Loch Leven and I passed through several delightful small towns. I have been thinking for some time that the people who do the signage for recycling centres should do the bike route signs. I have seen signs to the “Recycling Centre” in every town I have ridden through so far I reckon!! One small town I didn't even see its name - but the Recycling Centre would have been a breeze to get to!!

Arriving at The Bridge - consternation when it said the cycling lane was closed and to go down the steps at the side for an alternative crossing. I imagined some funny path hanging off the bottom of the bridge – or maybe I had to swim!! Decided to take some pics and while the 2.5 km long road bridge is a stunning suspension bridge, it is the cantilever designed rail bridge built in the 19th century that is the real landmark. As I finished taking pics, a work truck approached and opened the gate so I could proceed!! Phew – that was lucky!! I then realised that the alternative route was actually a pathway on the other side of the bridge. A pretty eerie feeling stopping on the bridge - windy and shaky – I wasn’t happy to stop for too long!!

Once off the bridge I chatted to a cyclist who sent me in the correct direction and said I would have a lot of cyclists coming towards me as it was the annual Edinburgh to St Andrews bike ride. He was right - and it made for an easy path to follow – so long as there were cyclists heading towards me – I was on the right road to Edinburgh! I have to say I thought the bridge was closer to the centre of Edinburgh (thinking Sydney and Auckland really), so was amazed to be riding for some time through farmland.

Before too long and after several stretches of cycle track, I made it to the town centre and took some very bad photo's (blame the cold) – so that was disappointing. I headed for the A7 and on to Gorebridge which was our planned meeting spot and arrived around midday – I had made great time!!

A mix up in communications saw me sail past where Pat and Pauline were - I thought they said Tesco at Gorebridge - but it was Tesco 5 miles before Gorebridge. They thought I wouldn’t miss seeing Tesco as it was right on a roundabout. Well, probably most people would see it – but cycling roundabouts in busy cities had me worried and required full concentration! You could either get off and walk them – which because of the volume of traffic could take some considerable time – or, really concentrate on what lane you needed to be in (normally three options) and cycle around them – much quicker, but rather nerve-wracking!!

When I asked a lady at Gorebridge where Tesco was - I got a very strange look and was told there was none there. Oooooops!! Attempts to ring the “crew” were thwarted by no mobile signal at the disued Gorebridge railway station. A minor moment of panic!! I then realised I had come down considerably so was in a bit of a “hole” – once back up the hill – contact was made.

Meanwhile Pat and Pauline hadn't had any luck finding accommodation – and had experienced the extremely frustrating matter when places have a sign up saying Vacancies - yet when they stop, park and go in - they are told sorry none! Apparently all the Universities and Colleges had finished their exams and a pool of teachers had arrived to mark these. They had taken all accommodation in the area!! Who would have thought!! I recalled I had seen a sign for a Premier Inn back that way somewhere (even though I couldn’t see a Tesco sign) so suggested maybe they try that.

I stayed put until I heard from them. Although I would have rather been biking as it was bleak, lightly raining and very cold. The call came – they had secured the last 2 rooms – so ride back!! I did so, but couldn’t find the place – duh!!!! I called them and Pat put me on to the girl in reception – I explained where I was (at a massive roundabout where several main roads all met) and the direction I was heading was towards Edinburgh. I had (unknowingly already passed the Premier Inn turn-off). She told me to keep heading to the city!! Through yet another round-about, and it all felt wrong – so where else to ask directions but at a Chinese Restaurant I spied.

Back I had to go – I was getting to know this stretch of road pretty well by now!! Thankfully Pat walked out in the rain and freezing cold to the roundabout I needed to “take the third exit” off and whoopee – at last I could get in for a hot shower and warm clothes – it was now 3:00 pm. The first 5 hours of the day I had ridden from Kinross, through Edinburgh to Gorebridge – the next 3 hours had been spent going up and down a 6 mile stretch of the A7!!! Just as well we can laugh about it now even though I was not amused at the time – all part of the adventure!!!

This was our most expensive stop of the trip – the room rates at these places fluctuate and Saturday nights are always the most expensive! While it served its purpose, I find this type of hotel very bland and faceless – I much prefer the homeliness of the B&B’s, Guest Houses and old pubs!! But – we had no choice! Luckily there were a couple of nearby pub restaurants so we were able to get a lovely meal that evening.

WIFI access was limited to 30 mins – so I purchased longer to book ahead accommodation for tomorrow – I had been reluctant to do this as I wasn’t sure if I would meet my planned daily goals – but as things seemed to be going to plan – fingers crossed that it would tomorrow as well.