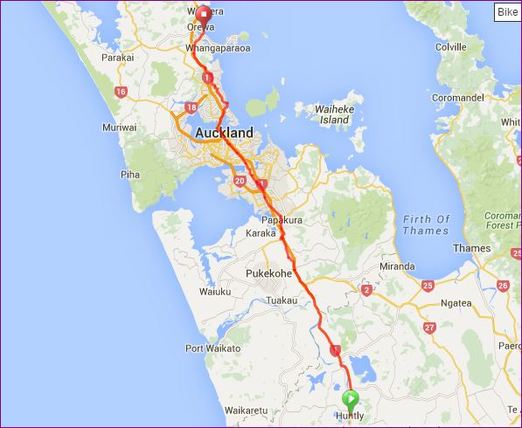 A Saturday morning – and deliberately so, as I am hoping it is the best day to ride through New Zealand’s largest city – Auckland. Its been hard thinking what is the best way through here – but in the end I have arrived at sticking to Highway 1 – where it becomes motorway we will get onto the Great South Road and head north on it – right into the centre of Auckland.  You can see there is a pretty good hill climb 40 kms north of Huntly – that is the “Bombay Hills” – when we reach the top of that you will look over the suburbs of Auckland, even though the city centre is still 47 kms away. From “downtown” Auckland we will catch a Fullers ferry across the harbour to Devonport.

A further 35 kms through mainly urban streets and we will be at the beachside town of Orewa. I feel a big sigh of relief – first rest day since leaving Wellington!!!! But I thought a good place to stop – handy for various activities for the “rest” day to follow.

I think it is better to be writing about this day in hindsight - as opposed to when we finally got into Orewa last night around 7:00 pm feeling absolutely pooped!!

We have had several tough days, but for many reasons, the day getting through Auckland won't be forgotten.!!

We got away from Huntly right on our normal start time - the weather looked overcast but luckily, there was no rain as we pedalled through to our first stop at Mercer. Interesting that locals had said we wouldn't be able to ride on the new road just out of Huntly, which had caused me a bit of a panic the night before - but a check on the Transit New Zealand website showed the road to be part of the "Waikato Expressway" - and as such pedestrians and cyclists are allowed!!  I read that this "Expressway" will eventually go from Auckland to Cambridge bypassing all the small towns along the way.

The "Expressway" is being completed in sections - and on such sections we were delighted to find a cycle lane marked!! One certainly does feel much safer biking in a lane!

Finally we reached Bombay where the Motorway begins, and where we did have to exit onto the Great South Rd. It was raining steadily by now - and biking along roads that I had only previously driven along - I couldn't believe how far it was when we lived in Takanini and used to "dash around to see Lindy and Ross" at Drury etc.

Eventually we reached Papakura - and had an extremely brief stop to see friend Janet who had travelled to Australia to see me complete my ride across Australia last year. From here on to the city - 35 kms of endless traffic lights, every Aucklander out for a Saturday morning drive in the rain, the constant whoosh, whoosh, whoosh of passing cars - the nightmare of drivers overtaking the bikes only to brake and turn left dangerously close in front of us, the need for extreme care on the slippery road markings, cars turning right across us with only a couple of feet to spare, a bike lane that came and brought a sigh of relief and just as quickly stopped - and bought despair. Short phase lights that split the group and caused delays while we re-grouped - it really was quite a nightmare!! After today I don't really think it is a "Great" South Road!!

Not long after 3:30 pm we made it to the Ferry Building, Downtown Auckland - and Pat headed off in Jucy around to Devonport. A quick coffee, a hot pie (couldn't believe the lady in the cafe asked me if I wanted it heated - a cold wet day and looking completely drowned - oh and covered in dirt - I forgot to mention the roadworks at the Takanini interchange where we had to bike through 10 cm slushy mud) and we were on the 4:00 pm ferry across to Devonport. Our bikes looked very cute lined up in the bike rack on the ferry and the crossing allowed Don and Annie a glimpse back at Auckland City, the Harbour Bridge and the Harbour. Hopefully the weather will be better when we return!!

Off at Devonport, met up with Pat - and we hit the road to Orewa ............ still raining. There seemed to be a continual lot of uphill stretches with no downhill parts we could appreciate due to strong side/slightly head winds. I know we started this part of the ride at sea-level, and ended it at sea-level - but I didn't feel any better than the day we climbed to the highest point of our ride on the Desert Road!!

But how good were the Zonta Hibiscus Coast ladies - we only arrived in to the Top 10 Orewa Holiday Park at the time we were supposed to be dining with them. But ever so cheerily they said they would be back in an hour to pick us up to go for dinner. Thank goodness for the hot shower, and a change to warm dry clothes to make us feel so much better. If anybody can put on a great "pot-luck" dinner - Zonta ladies can - it was a wonderful way to end what had been an exceptionally tough day. The 17th day of our ride - and 1700 kms clocked up!!

Great also to be able to talk "biking" (amongst other things) over dinner. Janet is preparing to go the Otago Rail Trail just before Christmas, and Carley who is an elite road racer. I offered her my bike to go to the Cape ......................

After yummy deserts, coffee and a last glass of Marlborough Sauvignon Blanc - we headed back to camp and crashed asleep!!