All funds raised during my ride across Australia went to either the Australian or New Zealand Heart Foundation depending on the donor’s wish.
​ It was a thrill to be named Best Individual Fund-raiser for 2011 by the Queensland Branch of the Australian Heart Foundation.
​Special thanks to EVERYONE who supported my ride.
Day 11 - April 10th, 2011
Madura Pass (WA) to Eucla (WA)
186.5 kms 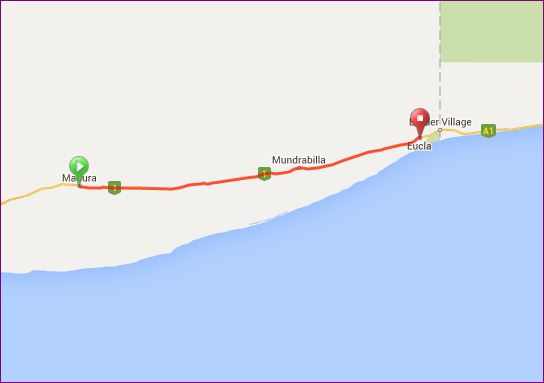 Another pretty straight line heading east on the map - and the lovely words - total climb 39 metres, total descent 59 metres!! As long as no head winds - my type of riding all the way to Eucla!! This Eyre Highway seems never ending!!

We will travel through Mundrabilla station, the first sheep station on the Nullarbor, which was established by William Stuart McGill (a Scotsman) and Thomas and William Kennedy (two Irishmen) in 1872. Despite receiving a miserly 6 inches of rain per year Mundrabilla continues to rely on pastoral activities for its existence. To the south of Mundrabilla lies the Great Australian Bight where a small Rock Lobster industry has developed.

Like other locations in the Nullarbor Plain area, Mundrabilla consists of nothing more than a roadhouse. This roadhouse includes a small wildlife park with emus, camels and an aviary.

Headed off bright and early and felt really good for my 10th day of riding. That seems amazing!!

Nice conditions for biking, a cool, crisp morning with no wind – yet!! Locals told me it was pretty flat all the way - great news!! I hadn’t been on the road more than a few kilometres before we came to the first of 3 Royal Flying Doctor emergency runways to be biked over today. As I pedalled furiously along the runway, it made me think of flying with Jane in her Cessna from Portland, Oregon to Orcas Island and imagining her coming into land beside my bike with those particularly smooth landings she does!! At the same time as those thoughts, of course I am hoping like hell there is no emergency and that I will make it to the end of the “runway” before this part of road is required by an aeroplane!

Saw many different types of trees today - toy trees, shoe trees, t-shirt trees, bra trees – with the last mentioned the only one we stopped at for pictures. We weren’t sure how “liberated” Lucy was, but thought we’d stop to get her picture with the bra tree.

I had to remind myself that it was Sunday – for whatever reason, this was the worst day of all for seeing (and smelling) road-kill. You’d think with the acres and acres of land, the animals would avoid the road at a time when a vehicle was charging along!! Often though, according to "truckies", the animals sleep on the road for warmth.

Was able to keep up a good pace, had one stop to receive fresh bottles of Endura, and another for a cup of coffee and morning tea, and the next stop was at Mundrabilla. This was supposed to be our stop for the night, but as it was only 1:00 pm decided to play the golf hole, fill up with petrol and then press on a further 66 kms to Eucla – the lure being the possibility of phone and internet service. Mundrabilla is renown as the cheapest place for petrol on this part of the journey ($1.79 per litre compared to $2.00 at Madura Pass) – but apart from that and the golf hole, there was nothing to spend time here for.

The golf hole turned out to be a good news / bad news story. One has to watch the ball closely here as the fairways are – well – just ungroomed desert – and with recent rain – covered in a healthy amount of scrubby ground cover and salt bushes. Pat hit a cracker drive and we watched it land safely. The next minute, a crow headed straight for it, and we watched as he pecked at the ball – and then – to our consternation – he picked the ball up and flew off with it!!!!!!! I watched him fly miles away and never saw the ball drop - so goodness only knows where it ended up. Somewhat gob-smacked, we went to where we could see where the ball had landed, dropped a new ball, and I proceeded ahead to keep an eye peeled for the second shot. Another great shot – I had only got about half the length of its distance – and then blow me down – the crow was back!!! I started running, yelling like a mad woman (which I have been called often lately with my decision to ride a bike across Australia) – but he deftly flew in, picked the ball up cleanly and was gone!! This was no longer a joke to Pat – 2 good shots, 2 lost balls!! – but she claimed a 5 on the par 4. I've heard talk of "birdies" and "eagles" on golf courses - but "crows"????

I headed towards Eucla, and had been warned it would be flat all the way, with an uphill at the end. I did start to get tired towards the end of the ride, but I had got a good distance travelled which had actually put me ahead of schedule for the first time!!! The hill into Eucla felt like Mt Everest to my legs, but what we got to at the top was worth the effort. A fantastic view of the southern ocean which would be spectacular on a bright sunny day – it was pretty good on what had turned into a dull overcast late evening. The Eucla Caravan Park is easily the best we have stayed at so far, exceptionally clean and tidy, well kitted out and a pleasure to be at.

Met some great folk in the camp tonight, one couple had even stayed at the Caravan Park at Scarborough in Queensland – and dined and bought fish from Morgans Seafoods!!! Their stay had been prior to the refurbishment of the park that took place a few years ago – so we encouraged them to call again!!

And the lure of internet/phone service – darn – not yet – that was a desert myth - maybe tomorrow!!!
It is curious that with the advent of the automobile and the airplane, the bicycle is still with us. Perhaps people like the world they can see from a bike, or the air they breathe when they're out on a bike. Or they like the bicycle's simplicity and the precision with which it is made.
Or because they like the feeling of being able to hurtle through air one minute, and saunter through a park the next, without leaving behind clouds of choking exhaust, without leaving behind so much as a footstep. - Gurdon S. Leete