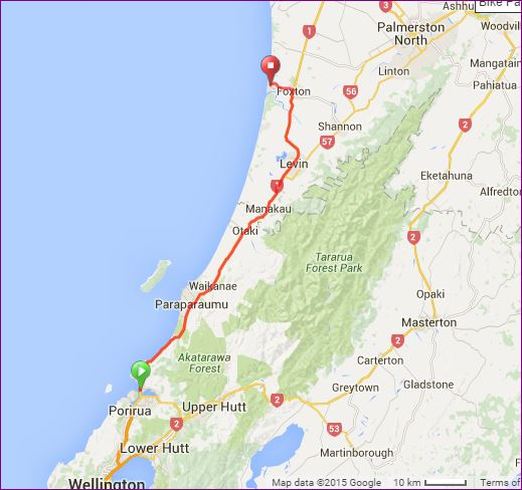 Off we go, cycling the North Island now!! The roads will be busier today and we will be going through quite a few built up areas as we head up the western side of the lower North Island. Wellington is the second busiest area population wise in New Zealand. A hill pretty early on in the ride and then it will be pretty gently undulating roads for the rest of the days ride methinks!

It is a much more populated area compared to what we have been through in the South Island, and we will pass through the pretty populated areas of the Kapiti Coast - towns like Porirua, Paraparaumu, Waikanae and on through Otaki and Levin finally arriving at Foxton for the night.

During the day we leave the province of Wellington and move into the Manawatu.

At the end of the riding day we should have reached Foxton - and for accommodation will be heading to Foxton Beach - a 5 km stretch of road - that my mother tells me she biked hundreds of times on her "deadly treadly" in the late 1940's!!!! She tells me it was quite hard to get a push-bike during war time - but the bike was built for her in Foxton. I have pictures of this bike in my mind - I think the bike I learned to ride on!!  I recall thinking how I would never get the hang of this as I crashed off regularly as I tried again and again up and down the school football field at Tapapa to try and manage a few rotations of the pedals!!
REVIEW:-

After such a big day yesterday - the executive decision was made to start this morning at 8:30 am, and it wasn't too long after that time that we said goodbye to Shona and Irene - who headed up the road to photograph us coming up the first hill before returning to Wellington to fly back to Whangarei.

Rain sort of threatened - but didn't come to anything - but the really good thing - there was a tail wind! Once over that first hill - it was easy riding around the Kapiti Coast - a very attractive outloook. But while the pedalling was free and easy - there were other "events"!

Just short of Paekakariki there was a loud "slap" noise and I felt a heavy blow on my rump! For one moment I wondered what the hell had happened - I was leading "the peloton" at this stage and those behind me said someone from a passing car had thrown a milkshake out at me!! I thought it might have been a newspaper deliverer and I had copped a paper - but we hadn't passed a driveway!! I cursed and was angry for a moment - then I just felt sorry that a person could be such a loser. Of course - it could have had far more serious results! It is not worth imagining if it had say hit my wheel and brought me down while at the front - we all could have tumbled!! I continued on with a stinging feeling in my rump for a few kms which eventually gave way.

MEANWHILE - "Jucy-Lucy" was not to be seen behind us!! We pressed on to Waikanae as we had an appointment with the Kapi-Mana radio station. We had been getting many friendly "toot-toots" along the way, and discovered that the station had mentioned earlier that we would be riding through Kapiti Coast today. When we stopped at Waikanae - Jucy-Lucy arrived - and we discover - that - for the second day running (both of our North Island days) - Pat had been stopped by the police!!!

Now I have to say I believe Pat is a very considerate escort vehicle driver - being extremely mindful of guarding our safety - as well as caring about not causing traffic hold-ups - BUT - the police thought otherwise! She was told by the police officer that she should dump the van and get a motorbike as an escort vehicle ................ hello - has he seen all our gear???? He then said it was a requirement that he breath test everybody who is pulled over - so she had to count 1 to 10 into the machine. We have since wondered why the officer the previous day didn't do this. Eventually - Pat was issued with an official warning for "Using a motor vehicle without due consideration" - no fine, no demerit points!!!!! She was also handed a form to apply for  a New Zealand Driver's Licence!!!!!! Hello? After 30 mins she was allowed to drive on - hopefully in a much more "considerate" manner!!!!!!!!

Waikanae radio interview went well, a cup of coffee settled everyone's frayed nerves. And another amazing co-incidence occurred. Don and Margie both needed attention to their bikes, so went to the "local bike shop". During discussion between Don and the owner, Don explained the ride we were doing. The owner replied that his son worked in a bike shop in Brisbane. It transpired that when Don went into his LBS in Brisbane to buy gear to wear on this trip - he was referred to the "kiwi" on the staff as he would know what was suitable!!!! And yes - that "kiwi" was this man's son!

Fed, watered, interviewed and with Margie and Don's bikes attended to, we headed for Levin. This was a very uneventful section of State Highway 1. We picnic lunched in the mid-town Adventure Playground of Levin - and had the added bonus of yummy, delicious home-baking that Irene had brought down - a choice between home-baked shortbread, peanut brownies and a very yummy Muesli Slice. Absolutely delicious Irene - THANKS!!

Pat grocery shopped at Levin while we continued to Foxton - where we stopped briefly. Don took a photo of me beside a picture of Hannays Motors Garage - the folk my mum boarded with many years ago when she taught at Foxton School! Margie stayed here at the library to use internet, Don, Annie and I headed for Kowhai Court at Foxton Beach. We had a great unit here - a "miniature home" and we got washing done with the Owner making his dryers available so we are all up to date!!

If all rides were like today's - the flatness I mean, not the incidents) cycling New Zealand would be a breeze!! But I think we should be enjoying this day while we can - tomorrow we start to climb!

For dinner we took a bottle of Toi Toi Sauvignon Blanc, picked up "takeaways" from "Grumpy's" and went down to the beach for dinner. It was pretty deserted as the wind was bitingly cold, but an energy-charged chocolate labrador thought she had spied some suckers and would be able to cadge a chip or two bounded up and gave us the "Nobody ever feeds me" look!

Once the food was eaten and the drink was drunk, we had to give into the cold and return home - after buying an ice-cream - haha - that makes sense!! But "Kapiti" ice-creams are special!

Probably our most enjoyable riding day - long may the tail winds continue!!