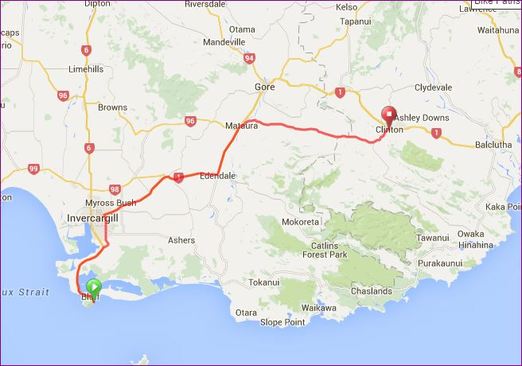 The elevation profile doesn’t look too bad for the first 80 kms as we only climb gradually to 60 metres above sea level through the undulating pastoral farming land of Southland.

The remaining 30 kms will be tougher, climbing to almost 300 metres above sea level. Then we get to enjoy the next 12 kms with a nice downhill run into Clinton for the first nights stop!!

We will be setting off from Stirling Point, just south of Bluff – at the start of State Highway 1 – a road we will become pretty familiar with as we travel up to the top of New Zealand!

We will cycle 28 kms to Invercargill – New Zealand’s southernmost and western most city and the capital of Southland, with over half the population of the region (50,000). The city features the only indoor cycling velodrome in the country. The 250m wooden velodrome is the fastest track in New Zealand.

Other small towns we will pass through on our way to Clinton are Edendale, Wyndham and Mataura.

Not too far before Clinton we will say farewell to Southland province as we cross into Otago.
REVIEW:-

What excitement this morning - the start of this wonderful bike ride from one end of New Zealand to the other! All the planning and organising was now about to be tested! I must admit, I didn't sleep much last night - not because the Oystercatcher's Cottage wasn't comfy - quite the opposite in fact - it was a fabulous little cottage filed with all sorts of quaint bits and pieces! I particularly liked the door and cupboard handles - all made from pieces of driftwood no doubt collected on the nearby shoreline. So lack of sleep was more about a whole lot of anxious excitement!

We'd been looking at weather forecasts, wondering what we would be "given" for the day, and kept trying to be optimistic despite gloomy news from the weather office. Yes - when we awoke it was raining, and the temperature not very much above zero! Everyone breakfasted, donned their warmest cycling clothing, left the cute little Oystercatcher's Cottage, and headed to the famous sign just south of Bluff at Stirling Point.

We got there just before 8:00 am - milled around, took photo's, heads full of thought about what lay ahead, and then the Cue TV crew arrived to meet us for an interview and some pictures. Unfortunately none of us got to see this, but maybe in the future we will somehow! They had also filmed a guy who had left at 7:00 am who was running almost the same route as us - to Cape Reinga.

By now it was only light drizzle and with a whoop of delight - we were off. In no time at all the drizzle had disappeared and we had a nice light tail wind - still desperately cold, so we remained rugged up.

Between Bluff and Invercargill we caught up to the runner and his support vehicle - big waves and words of encouragement to each other as we passed by - him as intent on his journey as we were on ours.

On reaching Invercargill and after riding down the main street, Tay Street, we were met by a photographer and reporter from the Southland Times for another interview and photo shoot.

After this short stop where we took upon refreshments, we decided our next break would be for lunch at Mataura. Once there, we would decide what option we would take to get to Clinton - the 12 km longer but less hilly option of State Highway 1 through Gore and along the "Presidentail Highway"  to Clinton, or the tougher but shorter "Old Coach Road".

By the time we reached Mataura, having passed through Edendale and the huge dairy factory, - we were actually hot! So as well as having lunch we also shed layers of clothing. The wind had also increased in strength so combining local knowledge from a young farmer we opted for the Old Coach Road option. Scenically this turned out to be a brilliant choice, such lovely rich Southland farmland. It wasn't quite "rolling" Southland farmland though and there were some good climbs along this road that warmed us up even more. But the south-westerly wind was right at our back - we appreciated its assistance!

Finally we started the wonderful wind down into Clinton - flying down the hills, speeding round the corners - those times make the climbing all worthwhile!!

We took photos of us "riding" the life-size Clydesdales - there were 5 of them - which we found hard to fathom when the Welcome to Clinton sign stated it was a "3" horse town!

On, well, back to our accommodation at the Clinton Hotel. Hot showers were so welcome after our 126 km day. Looking back at the elevation profile - it looks pretty accurate to me!! It was pretty easy going for the first 80 kms and then there was 15 kms of climbing. Some up and down stuff and then another biggish climb before the final 6 kms of the day which pretty much required no pedaling!! Day one done!!

Dined at the Clinton Hotel where we enjoyed a hearty meal and were then able to engage in great friendly banter with the locals. The "Elders rep" gave us a lot of local information and we were able to watch the Australia v New Zealand netball test to see a wonderful victory by the kiwi's!

We collected donations towards our cause at both Mataura and Clinton - great stuff - we are on our way!! 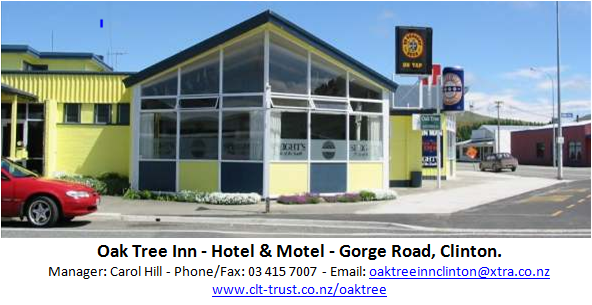