All funds raised during my ride across Australia went to either the Australian or New Zealand Heart Foundation depending on the donor’s wish.
It was a thrill to be named Best Individual Fund-raiser for 2011 by the Queensland Branch of the Australian Heart Foundation.
​Special thanks to EVERYONE who supported my ride.
Day 1 - March 31st, 2011
Scarborough (WA) to Northam - via Redcliffe.
114.5 kms 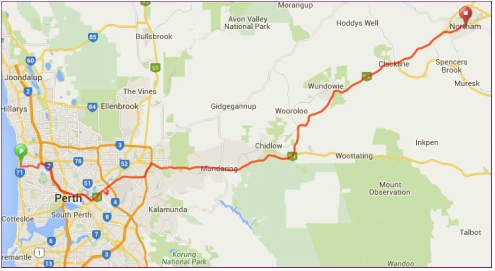 I will be departing from Scarborough Beach, a suburb of Perth that is right on the Indian Ocean.  Perth is the Western Australia state capital and Australia's 4th largest city. I will head slightly south-east initially which will take me through another Perth suburb - Redcliffe. This slight "detour" will enable me to complete the Scarborough (WA) to Scarborough (Qld) and Redcliffe (WA) to Redcliffe (Qld) double!

From there, I head for the Great Eastern Highway (94) and when I get to the rural town of Northam, my first day will end. The Great Eastern Highway is a major road between the Western Australian cities of Perth and Kalgoorlie. It is a key route for vehicles accessing the eastern wheatbelt and the eastern goldfields. It also forms the westernmost 595 kilometres (370 mi) of the main road transportation link between Perth and the east coast of Australia.

I am expecting a reasonably tough day today. There will be excitement that the ride is finally underway - and, I have already been told by a couple of Western Australian motorists that it is very hilly to Northam. Bit frightening when motorists tell you its hilly - I often find they tell you a ride is "pretty flat"  - until you come to bike it!!!

The elevation graph above does show a decent sort of a climb between the 33 and 44 km mark - so that should be a good first day test!! The downhill section at the end of the day will be most welcome!!

Northam is a rural town in Western Australia, situated at the confluence of the Avon and Mortlock Rivers, about 97 kilometres (60 mi) north-east of Perth in the Avon Valley. With a population of slightly over 6,000, Northam is the largest town in the Avon region. It is also the largest inland town in the state not founded on mining. It is a major railway junction, and serves as the commercial centre for much of the western Wheatbelt

During the 1940s and 1950s there were extensive camps and it was the first place of residence in WA for approximately 15,000 immigrants from the Baltic States, Hungary, Poland, Czechoslovakia, Italy, Yugoslavia, the Ukraine, White Russia and Bulgaria.

Steve Fossett became the first person to fly around the world alone, non-stop, in a balloon when he launched from Northam on 19 June 2002, and returned to Australia on 3 July, landing in Queensland!!

Scarborough Beach looked beautiful!!!! The Indian Ocean is stunning, fabulous shades from turquoise to deep blue sea, meeting a beautifully clear blue sky - a bright sunny day!!! Perfect!! Thanks ever so much to our Perth host Noni for her assistance in getting me to the startline!!!! Many thanks also to Val Swetman and the ladies from the Scarborough Sportsmens Club - Bowling Division for their support!! And also to Wendy and Nicole from the Western Australian Heart Foundation who saw me start my journey.

My "googled" route through Perth was easy to follow, and when I got to Ascot Racecourse - I called my Dad for his birthday - and was fortunate to be able to speak with my whole family in NZ who were celebrating his 88th birthday with an outing to the "outbacks" of Northland!!

Then on to Morgan Reserve in the suburb of Redcliffe, where I met up with my "crew". Pat, had made a detour to Morish Nuts who kindly donated product - "energy food" - for me, and some samples to give away at camping grounds along the way to people who donate to the Heart Foundation!!

Had lunch - then off towards Northam via the "infamous" Greenmount Hill. Thank goodness I had been warned - it was a long tiring ride!! More food at the top, and then Pat got called back to Perth to pick up a parcel. I continued along my way, then 8 kms out of Northam - I punctured - back tyre!! As luck had it - Pat arrived back 5 mins later while I was still "resting" and wondering what to do!! Puncture fixed, into the town of Northam and to the camping ground opposite the trotting track!! .............. and guess what - another puncture - front tyre this time!!

Couldn't feel sorry for myself - Pat had had a much busier day!!!! Negotiating her way through a large city she was unfamiliar with, picking up nuts (for the nut), looping back to Scarborough for another pick-up and mending 2 punctures. I hope the punctures are not going to continue at this rate or I will not have enough spare tubes or patches in my puncture repair kit!! They seemed to be caused by "thorns" - so a note to check the tyres very carefully when I bike anywhere off the road!!
The bicycle is a curious vehicle.  Its passenger is its engine.  ~ John Howard