All funds raised during my ride across Australia went to either the Australian or New Zealand Heart Foundation depending on the donor’s wish.
​It was a thrill to be named Best Individual Fund-raiser for 2011 by the Queensland Branch of the Australian Heart Foundation.
​Special thanks to EVERYONE who supported my ride.
Day 23 - April 22nd, 2011
Olary (SA) to Broken Hill (NSW)
116.1 kms. 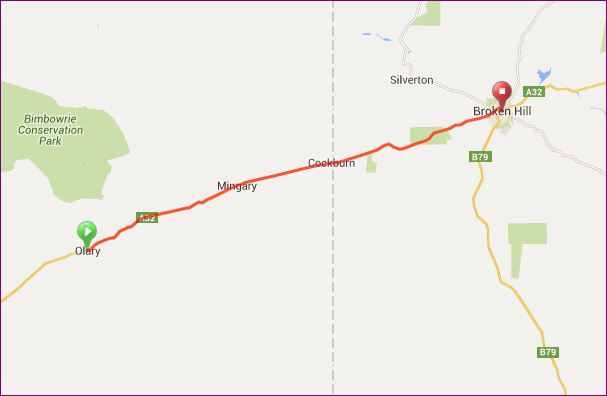 It seems the first half of the journey along the Barrier Highway today will be downhill, and then climb back up into Broken Hill

Today I will say farewell to South Australia as we will end the day at Broken Hill which is in New South Wales. Its the 23rd day and we have been through 2 states!!

Broken Hill is an isolated mining city in the far west of outback New South Wales, Australia. The world's largest mining company, BHP Billiton, has roots in the town. Broken Hill has a population of around 20,000 and is one of the larger towns in New South Wales.

Broken Hill has been and still is a town dominated by the mining industry. The mines founded on the Broken Hill Ore Deposit - the world's richest lead-zinc ore body - have until recently provided the majority of direct employment and indirect employment in the city. The Broken Hill Proprietary Company became Australia's largest mining company, and later became part of the world's largest mining company, BHP Billiton.

Due to its exposure to the vagaries of the mining industry, and because of a swiftly shrinking population, similar to other rural centres, and compounded by its isolation, Broken Hill has actively encouraged its artistic credentials and is promoting itself as a tourism destination in order to become less reliant upon mining as a source of employment.

An early start to the day - with quite a difference!! Oh - first off - no trains last night, virtually no road traffic and no pub patrons - so it was a quiet night!!!

When I awoke and headed for the toilet, on a very crisp morning, I was surprised to see an elderly man wandering around the parking area!! He looked freezing, tired, and asked if we were going to Radium Hill. "Where" was my reply? He said about 25 kms towards Broken Hill and then turn right and head 30 kms east. I replied we were going to Broken Hill, and as I was on a bike I couldn't help. The poor soul headed back over the road and sat on the Hotel steps awaiting a lift, and looked very miserable. Not much traffic around on Good Friday morning!! Over breakfast I thought about it and suggested to Pat perhaps we could give him a lift as far as the turn off, and then someone going that road would surely pick him up!

We prepared to leave, I biked over to the pub and made the offer!! He was so very pleased! It turned out he was going to the 50th Jubilee of the closing of the Radium mine. As he had worked there, he must have been a fair age to be out hitch-hiking in such cold weather!! It transpired his travel plans had gone awry so it was not really his fault. Pat and "Lee" followed me in the car, so it was a slowish journey for him - although with a strong (very strong) tail wind and a flat road I was whirring along at around 40 kph. We spotted the yellow ribbons around the road sign which signified "the turn off" to the reunion, so we left a very grateful guy there - along with refilled water bottles and some biscuits for which he seemed very grateful.

On I went, enjoying these helpful winds immensely and it seemed no time before we were at the SA / NSW border town of Cockburn. As it was Good Friday we thought we would treat ourselves to Hot Cross Buns and a hot coffee at the road house which was open.

No luck with the Hot Cross Buns - the lady in the shop said she had 6 kids and they had eaten them all!!!! So we pretended that thawed out muffins were hot cross buns. Not quite the same thing - but who really cares!! The coffee was good!! Everyone seems to write their name on the walls of this stopping place, and they must have had a 9' visitor from the town I was born in - as WHAKATANE - Aotearoa - was written in 6" high letters atop all!!!!

Pat headed on into Broken Hill to secure a camping site. We had been getting increasingly worried that we would not get anywhere to stay as "reports" had been filtering through that the town was full for Easter. Who would have thought?? Well, I didn't - silly of me I guess!!!!

The Ulysses Club had completely booked out one camping ground, leaving only one other. Plus there were various jubilees and bowls tournaments on - but as luck would have it - Pat got to town early and secured a site!!!! And to top it off - when they heard what I was doing - they didn't make a charge, which was very nice and we will put something into my Heart Foundation fund as a way of thanks!!

Rang my mum and dad to wish them a Happy Easter - sorry to make you run up the driveway mum!!!!! And now I have had a relaxing afternoon, catching up with emails and website updating.

I will be having another rest day here tomorrow - last supermarket chance for a little while, (a chance to get some marshmellow filled Easter eggs I hope) and hopefully will get more photo's up on here!!

And as luck would have it ............ another cyclist in camp!!!!!!! A "Giant" rider as well - and a marathon runner - and I am hearing interesting stories about cycle touring around the Mudgee area - who knows???? Nice to meet you John and Helen - hope to see you in Scarborough, Queensland some day for some biking!!

My kms travelled from leaving Scarborough (WA) to the SA / NSW border = 2850.73 kms.
When I was a kid I used to pray every night for a new bicycle.
Then I realised that the Lord doesn't work that way so I stole one and asked Him to forgive me.
Emo Philips