All funds raised during my ride across Australia went to either the Australian or New Zealand Heart Foundation depending on the donor’s wish.
​It was a thrill to be named Best Individual Fund-raiser for 2011 by the Queensland Branch of the Australian Heart Foundation.
​Special thanks to EVERYONE who supported my ride.
Day 30 - April 29th, 2011
Nyngan (NSW) to Warren (NSW)
83 kms. 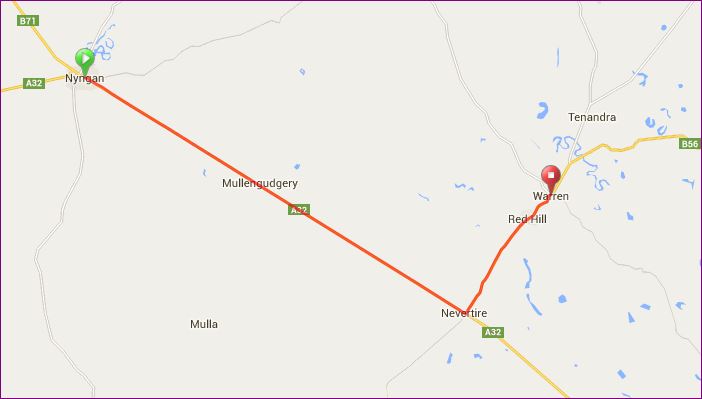 So after the downhill of yesterday - that elevation graph above looks pretty much all uphill to me for today. The first part of the day will be on the Barrier Highway 32 until I reach an aptly named place - Nevertire! Here I hang a left onto Oxley Highway - 34 and continue to Warren. This is shorter than my original plan - but as I have some days "up my sleeve" now, this ride seems an ideal one to split in two.

Warren is a prosperous looking country town sitting on the banks of the Macquarie River. The cotton and wool industries are very strong throughout this area.

The town has great sporting facilities including - a bowling club!!

Two days in a row – and two starts with a difference!!!!

Donna, from the Bogan Shire Council, rang and asked us in to morning tea and to receive a donation of $200 to the Heart Foundation from the Shire!! How wonderful is that!! Special thanks to Donna and the Bogan Shire for your support!!

It transpired that it was the last day for the CEO of the Bogan Shire Council – so what a great day to arrive – we were able to partake of his farewell cake – which was a work of art – also organised by Donna!! I was thrilled that they supported the Heart Foundation, and I really enjoyed the genuine “community” atmosphere that they promoted and demonstrated!!

I hear the Nyngan Bowling Club has a great group of junior players – so look out – in the future – I am sure we will see State and Country champions from there!!

By the time we got away, it was 11:00 am and having decided to only go as far as Warren, the later start to the riding day was not an issue. I headed straight to the interestingly named township of “Nevertire”. Straight – as there were NO bends in the road at all!!!! 57 kms – straight and flat!!

On reaching there – as I was still feeling full from the ample morning tea courtesy of the Bogan Shire Council – we missed a lunch stop and went the remaining 20-odd kilometres through to Warren.

When we started to set-up for the night, a mouse lept out of the back of the Jucy!!!!! I hope the mice from Warren get that little Bogan!!!!!!

And - we are still learning about becoming "real" campers. How we smiled when we saw a nice tree to park under - and we patted ourselves on the back for selecting such a nice site when we had been told by the office to park wherever we wanted to. When dusk arrived I am sure at least 700 million galahs arrived to nest in the tree above us!! The "chatter" was unbelievable - and so too would have been the amount of "poop" generated overnight - so we moved to a treeless site!!

These were the same galahs that I am sure I admired, and even photographed in a park in the township earlier in the day!!

Today I caught up with my mum, dad, bro and sis - Happy Birthday Shona - good to chat to you all !!

Everyone seemed to be busy settling in to watch "The Wedding" - but as we don't have a TV - we opted for a quiet night of reading, sudoko's and me on the computer - still catching up!! However we were soon treated to quite the other end of the scale!!! There are quite a few "permanents" in the Warren Caravan Park, and just along the "street" - a domestic started!!!! Slightly raised voices to start with which we couldn't really hear - but then the volume rose and rose!!! All sorts of "issues" were "aired" for the whole camp to hear. What entertainment - that turned into an out and out shouting match pretty quickly!! Eventually - the final cruel blow - when "she" shouted - "You are not her "effin" father anyway" - and then "he" got in the car and roared off out of the camp!! So - that is how we will remember the night of the royal wedding!!
While crossing the US-Mexican border on his bicycle, the man was stopped by a guard who pointed to two sacks the man had on his shoulders. “What’s in the bags?”, asked the guard. “Sand,” said the cyclist. “Get them off – we'll take a look,” said the guard. The Cyclist did as he was told, emptied the bags, and proving they contained nothing but sand, reloaded the bags, put them on his shoulders and continued across the border. Two weeks later, the same thing happened. Again the guard demanded to see the two bags, which again contained nothing but sand. This went on every week for six months, until one day the cyclist with the sand bags failed to appear. A few days later, the guard happened to meet the cyclist downtown. “Say friend, you sure had us crazy”, said the guard. “We knew you were smuggling something across the border.
I won’t say a word – but what is it you were smuggling?” “Bicycles!”