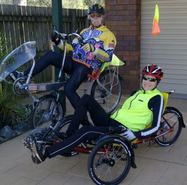 ​
My supporters for today who have very generously donated to The Fred Hollows Foundation are:-
Kevin & Pauline Green. I am forever thankful to Kevin for the wonderful care he gives my bike Finn - he services my bike before and after each long trip with incredible care! No matter how many battle-scars Finn gathers on these journeys - he always emerges from Kevin's workshop looking like a brand new bike. Appreciate your support Kevin. It was a delight to have Pauline with us on this journey for the first 3 weeks. We do a lot of biking together - my training rides - and while it was a shame she didn't ride in the UK - I hope she enjoyed seeing just what goes on during one of my rides! 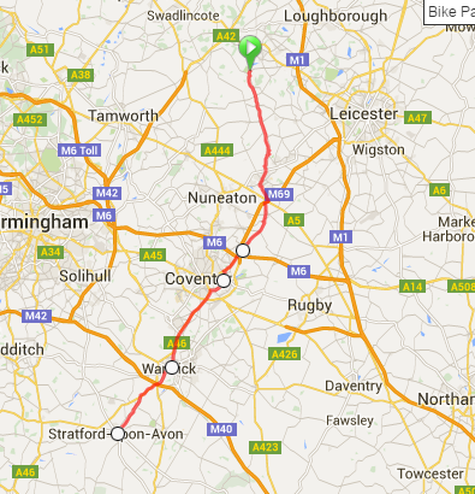 A special thanks to Pauline and Kevin Green for their generous donations to The Fred Hollows Foundation – as the town of “Coventry” was where they both lived for quite some time, I thought appropriate to recognise their donation on this day.

I originally had planned to go from Ibstock to Stoneleigh today. I only picked the end place as it is the name of a Marlborough Sauvignon Blanc that I like! That distance wasn’t far, but there was the large city of Coventry in-between – and I know how well I perform in cities!!

As it happens – this is the day that Pauline is to leave us – as she will be stopping here with friends before taking a coach tour to the Lakes District and then meeting up with family before her return to Australia. The address we were to drop Pauline off at was on the south-eastern side of Coventry and when I plotted the course the night before it seemed not too far out of the way for me to cycle that way, effectively scouting around the outskirts of the city. It meant I wouldn’t see Coventry Cathedral – but – in all honesty – we have seen so many impressive old churches, abbeys and cathedrals, castles, I wasn’t going to be too disappointed. After all – you can’t see everything even when you live your entire lifetime in one country!!

Yet again, Pat enjoyed salmon for breakfast at Ibstock and then we were away!! First “stop”  was Hinckley, a town Pat and I had stopped at on our first trip to the UK in the 1990’s. I must confess, it didn’t look familiar at all – but I wasn’t travelling at bike speed in those days!! We cut down the eastern side of Coventry on the B4065 which was very pleasant riding. As we approached busy intersections such as where the A5 and M69 and later the M6 traffic would increase – only to drop away in between. I had ear-marked the towns of Shilton and Ansty on the map as suitable to stop for morning tea. They looked as if they would be reasonable sized towns, and are also very close to the outer ring road of Coventry and very little distance to Pauline’s “drop off”. Again we struck nothing suitable open – and this a Monday morning!! The farmland had started to change with cropping seeming to subside and more dairy herds appearing. Where there was cropping it did seem to be potatoes – no wonder we were served so many at the Copt Oak yesterday!!

The weather had clouded over and some showers were happening, so we pushed on through the very busy M6 / A46 / M69 and about 100 other roads intersection to the A4600 which we just had to trundle along through millions of roundabouts until we found the Hipswell Highway. This all went pretty smoothly on the bike, despite several instances of road-works that caused general traffic to slow and queue.

It was great to meet Irene, and she provided the cup of coffee we were hanging out for by this time. Not wanting to get too warm and comfortable, we confirmed the route I had plotted earlier to head towards Warwick. As there had been no hills to speak of thus far, and looking forward looked pretty “rolling” as well it was in my thoughts that we would stop at Warwick, beyond the planned Stoneleigh. We had arrived at Irene’s place in rain and cold – by the time we left it was sunny and warm. We had gone from winter to summer in one coffee break!

It was sad to say good-bye to Pauline – she had been with us since the start and it would have been good to have her to the Land’s End!! She’d been in the car with the map poised on her knee giving turn left, turn right instructions to Pat for just over 2 weeks. Pat had to fly solo now – so only one set of eyes to keep a look out for road signs etc!! Thanks Pauline.

The distance to Warwick was only about 12 miles, and once clear of the outskirts of Coventry we were able to use the quieter B4115 road and it was pretty much all down-hill to Warwick. It didn’t take long to get there at all. It had been funny seeing signs to London today. We were less than 100 miles (160 kms) away – from now on we would get further away! We both made it and met up at Warwick Castle as planned. It is a pretty significant land-mark in the town and well sign-posted so it was a pretty easy spot to find! After a look around the outside, and seeing quite a few queues, we opted to have coffee at the shop there and press on to Stratford-upon-Avon which was only a further 9 miles – and again – an easy rolling riding.

What a lovely town Stratford-upon-Avon is. We got a B & B that was very spacious and recently modernised, and with two huge plus marks. Firstly it had a fridge in the room – so in went a bottle of Marlborough Sauvignon Blanc for later. Secondly it was in walking distance of the town centre, so after showering and changing we went for a stroll.

I had been confused if this town should be “on-Avon” or “upon-Avon” – but discovered the town is “upon” but the district is “on”. It was a bustling tourist town with it being Shakespeare’s birthplace. It was beautiful to stroll around the banks of the Avon – watch the antics of some local youth who appeared to have had one or two too many “pints” and at one stage stripped to their “duds” and swam across the river and back!! Brrrrr!!!! We were entertained by a very good busker in the centre and I regret now not buying one of his CD’s. The many historic buildings and Shakespeare related statues were fascinating. With this late evening daylight we didn’t realise how late it had become – we stopped at a shop, bought bikkies and cheese and returned to the B&B for a nice quiet drink - perfect!!

All in all a lovely day – tinged with a bit of sadness that Pauline was no longer with us to share a glass of wine and tales of the day!!

Having brought up the “on” / “upon” name matter earlier - I continue to be amused with many of the names here in England. Over the last few days “Barton” and “Burton”, have been occurring regularly – both on their own, and with various “add-ons”. Not only had I seen Barton, but also Barton Waterside, Barton-upon-Humber and one that I was amazed the sign hadn’t been altered on “Barton-in the-Beans”. Burton I think was even more frequent – Burton, as well as Burton Fleming, Burton Joyce, Burton Hastings, Burton Green, Burton-on-the-Wolds and Burton Waters!! Don’t get me started on the “Bardon’s” and “Barrow’s”!! I now know how Don Bright felt in New Zealand with all the “Wai…..” and “Kai…..” places!! 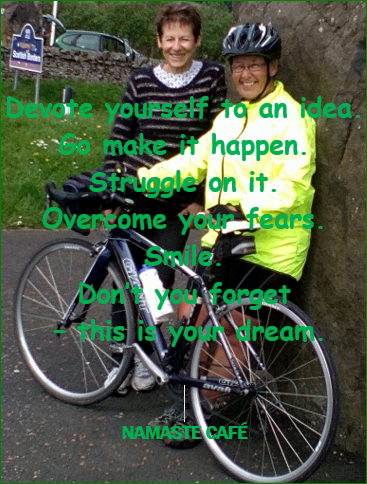