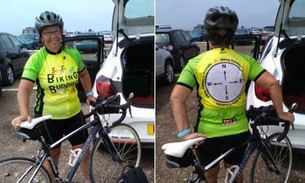 I dedicate today's ride to my "Biking Buddies".
A wonderful group of people from all walks of life, who I regularly ride
with while getting fitter to do these rides.
They are a great bunch of people and I know several have made donations to
The Fred Hollows Foundation
in support of my ride. Thanks everyone!! 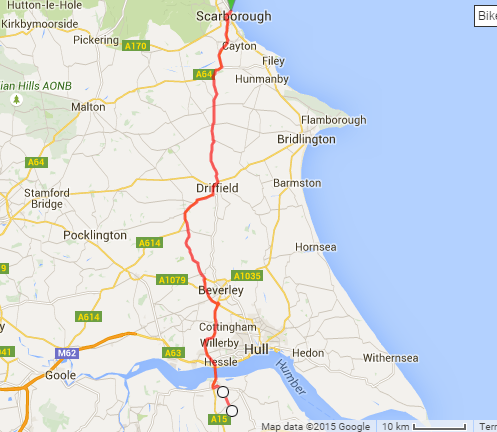 I'd like firstly to say a big THANK-YOU to so many of my Biking Buddies who have sent me messages of encouragement and indicated that they have donated to The Fred Hollows Foundation. Have had so much fun biking with you guys over the years - and lots more rides to come when I get back!!!

It had been a great stay in Scarborough – just long enough – and now time to move on again for the second half of the journey. I had thought Scarborough would have been about half-way – as it worked out I had covered 847.8 kms to get here and a further 793.8 kms got me to Land’s End. All very good in hind-sight – but at this stage – all that was ahead was unknown territory!

I farewelled Scarborough right on 9:00 am in cloudy overcast conditions that remained for most of the day without actually raining. Again I spent time on the internet last night trying to suss out accommodation in Hessle which was my original thought of where to stop for the night. I didn’t have any luck finding anything suitable without travelling into Hull – and again – with my aversion to big cities, I opted to look over the Humber Bridge and found something suitable there.

I headed out on the A64 and it was pretty easy getting out of Scarborough (population approx. 60,000). I had a great ride through to Staxton with part of it being on bike-paths. Most enjoyable. The good thing I am finding about being forced (haha) to have cooked breakfasts between 8:00 and 9:00 at most B&B’s and Hotels – is that most of the school traffic and business traffic has subsided before I start my day.

While the A64 headed in a more westerly direction I turned on to the B1249 just after Staxton. On the map this looked pretty much a straight road all the way to Driffield. I had noticed on my elevation chart though that there were 3 pretty good climbs to be had between the 15th and 35th km. I also noted that the first would be the worst and they would get progressively “easier”. The first climb lived up to expectations – almost immediately on turning onto the B road – the climb started and went on and on and got steeper and steeper – and then it was time to get off and walk!! It used to annoy me when I had to walk – but now – I just think – why worry – I am still getting there – it is just “push-bike” time. The other two climbs I knuckled down and made them without walking.

The downhills were great and invariably ended going through small villages such as Foxholes and Langtoft. It was soon time to go onto the A614 which would lead me to the A164 – sometimes these numbers can be confusing. Just as well I write them down! Farming land through this area had been lush, and they have obviously had a great spring as so much grass is being cut and baled. I opted to by-pass Driffield which took me past the big show-grounds heading in the direction of Beverley. Again, there are lesser roads that could have been used, but I was finding this road quiet and the scenery most pleasant. I noted a town named Beswick on the map and got the crew to detour through there in case it was where the china was from. They reported seeing nothing (?!) so I didn’t detour. We met up at Leconfield just short of Beverley and whilst Beverley had a road by-pass, I said I wanted to ride through this town as my good friend Jurina Demaine was born there!! It also happened that Liz Armour who we had met in Sandsend was going to be in Beverley this weekend for a Festival.

Beverley was a very attractive old town – nice sized with a population of about 30,000. As well as its racecourse and famed markets it hosts a number of music festivals throughout the year. The penny dropped as to why I had difficulty getting accommodation at Hessle – the particular festival this weekend was quite a big one!! I enjoyed entering the town through the wall, and the market square was very attractive. If someone would clean the town sign it would be perfect!

The wind had picked up a bit through the day, but it is wonderful how the large amount of tall greenery and hedges alongside the roads gives a cyclist a lot of protection – so while noticeable on occasions through “gaps”, in the main it didn’t interfere with progress.

Cycle paths had appeared about 10 kms from Beverley and were to come and go for the rest of my ride today.

Beverley to Hessle was considerably busier traffic wise, so I was pleased for the bike paths. There was also a good deal of road-works happening on this stretch – I think I was progressing along at about the same speed as the cars on the road – maybe even a bit faster.

Crossing the Humber Bridge was something else I had been looking forward to. It is a single span suspension bridge and when it opened in 1981 it was the longest of this type in the world at 2,220 metres. Currently it is the 7th longest. It carries 4 lanes of traffic and has pedestrian/bike lanes on both sides. Yet again (it must be me) I had difficulty following the paths to the bridge. I had read somewhere to cross the Humber on the west-side – so headed in that direction. But what did I come across?? – a sign saying Cycle / Pedestrian Lane Closed. I then scrambled around to get to the eastern side – it wasn’t obvious to me – but ended up being a very pretty route through trees, gardens etc. Traffic has to pay a toll to cross – bikes get a much longer more enjoyable journey for free.

The Humber is a huge water mass at this point and as far as you look eastward it grows wider and wider. Stopped for a few photo’s, but with the bit of wind that was around – I find it rather uncomfortable stopping for too long!!

Declined taking the bike route after the bridge as Pat had phoned with her position at Barton-Upon-Humber where we would meet and then endeavour to find our rural B & B – that had advertised as welcoming cyclists or those travelling by horse! It sounded an interesting place. It was actually south of Barton-upon-Humber more in the area called Burnham. It looked simple on the map – but when there are no road names at intersections it does get a bit tricky.

I felt we had headed a bit too far so we rang to check, and sure enough we had passed the property. The B&B had a tiny little sign saying “West Wold Farm” yet it was right next to a garden centre with huge signs. If that info had been in the directions it would have been a breeze to find!!

But a good find it was and Pam was a great hostess. Sadly her stables were empty as her thoroughbreds were down the road in fields, but we enjoyed her dogs, and spotted the hens that provided the beautiful eggs for breakfast.

Once showered and changed, and Finn tucked up in the special bike shed, we trundled back into Barton-upon-Humber (do residents really say that mouthful all the time?) – to decide what “pub” we would eat at. I reckon it is always a good sign if a place is busy – so we went into the George Hotel. The “supervisor” was under the pump a bit being so busy and she was a little dismissive telling us of a half hour wait even before our order could be taken. We were happy with that – perfect amount of time to down a pint – and it was a nice warm place to sit with great atmosphere. We were therefore surprised when our orders were taken after only about 15 mins and the wait staff seemed much more calm and collected than “the boss”.

I had a pub specialty “steak and ale” pie – in fact – I think we all may have done so. I expected to get an individual pie, but they obviously make a very large pie and cut it into bits. No matter – it tasted delicious and was served with a nice array of vegetables instead of lots of fries. Even though “full” I couldn’t resist looking at the sweets menu and was talked into having the traditonal “Spotted Dick” and Custard pudding – beautiful!!

The day had gone well - we were a little ahead of schedule being over the Humber Bridge instead of still north of it - we could afford a later start in the morning if we wished. 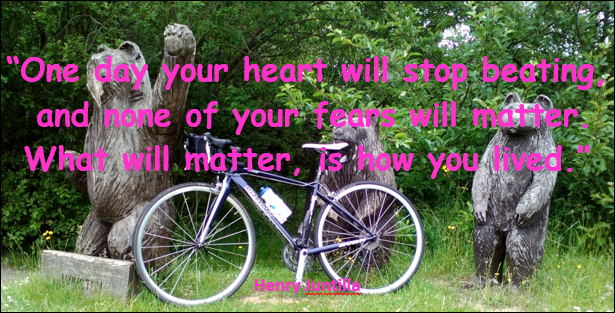