Interesting New Zealand facts:
New Zealand was the first western democracy to give women the vote - a battle lead by Kate Sheppard in the 1890's. 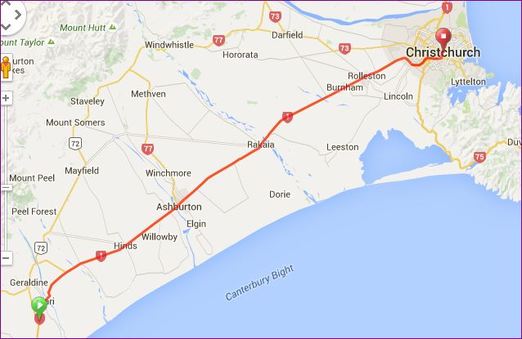 This will be our longest ride so far – 137 kms – (should also be the second longest distance day of the trip) but the next day is a rest day that I am sure we will be looking forward to!! Again – I think it looks worse than it will ride. The good thing is that we will reach the highest point of the day’s ride after 85 kms – with the last 60 kms of the day being basically downhill! That sounds pretty good to me!!

After approximately 60 kms and having passed through some very small towns we will reach Ashburton – a good sized town (18,000) which lies in the middle of Canterbury in the fertile alluvial plains. It’s an interesting town and should be a good stopping place for lunch.

Heading to the largest city in the South Island, Christchurch (population about 400,000), we’ll cross the Rakaia River over NZ’s longest bridge. Small towns will grow in frequency as we near the city. I haven’t been to Christchurch since all the devastation of the earthquakes so it will be interesting to spend a rest day in this area and have a good look around.

We were all up and organising our bikes bright and early contemplating the longest ride for the South Island component of our journey. It was pretty cold, but not raining and the slightest of breezes. We were sent on our way with the cheeriest of farewells by our hosts the McBrides - and I think we were all feeling - we'd be back some time in the future. They insisted that we took with us what we hadn't drunk from the fridge - Thanks so much!!

Despite it being a flat ride today, for some reason I felt the wheels on my bike just didn't want to roll today, and we just seemed to battle away though the South Canterbury farmlands. A few showers came and went and the wind picked up as the kms ticked by. On looking at the elevation profile though, I guess we were heading ever so slightly uphill for most of the morning - perhaps the reason that my bike felt lethargic!

We had a brief toilet stop in Hinds and continued on to Ashburton by which time the rain had become more persistent and the wind more of something that had to be battled. A stop for coffee in the main street of a very pretty town gave us a chance to warm up in a well heated building. I was supposed to make contact with some Zonta ladies here - but it didn't seem to work out and we had to continue on our way with time looming as an issue today. I was very sorry about that, but it is one of the difficulties that comes with the vagaries of cycling.

Roads were pretty busy today, but we received lots of friendly "toot-toots" from the truck drivers and a big toot-toot from the Inter-city bus driver who had driven 3 members of our team from Dunedin to Invercargill the day before we started. I sort of got the feeling that perhaps the increasing number of toots were coming from drivers who had seen us on the road on previous days.

Keenly we rode on to Rakaia - and here - after meeting "The Big Salmon" we also met Margie's son Tony, Margie's nephew David, and his son Josh, and their friend Pat Smith. Another coffee and a bit of energy food - and we were off!! How good did the riding for the last 55 kms become!! The "new blood" took the lead (and the wind) and I became like a lot of the racehorses I have owned - happy to follow along behind the horses in front of me!! What bliss to the tired legs and rear-end!! Josh rode in the van with Pat - which gave her company after 5 solo driving days. Michael - the provider of the "Spot" tracker also came down to help us with a few of the technical issues we had been experiencing!

Nearing Christchurch we rode alongside the main highway on Jones Road and I was able to recognise places I had visited in years gone by such as Roydon Lodge Stud etc. Such a heartland of standardbred breeding and harness racing in this area!

We turned into Buchanans Rd and I thought to myself - this is the road Tony is in - can't be far now - but this road is not a short one!! What relief when we arrived at Tony's - the longest 1 day ride ever for Don and Annie - well done guys!! Straight in to a 37 degree spa - relief!!! A glass of Toi Toi Sauvignon Blanc (or was that 2, or 3 glasses?) to celebrate 5 days of riding and over 600 kms!! A rest day tomorrow - YAY!!

Another wonderful gesture was received when we finished cycling today. It came from Pat Smith - Interior Plasterer - one of the guys who came down to bike in with us - wearing his shirt printed with his business details. He offered - that if one of us wears this shirt each day for the rest of the ride - he will donate $500 to the cause! Thanks Pat - game on - the shirt will most definitely be worn!!