All funds raised during my ride across Australia went to either the Australian or New Zealand Heart Foundation depending on the donor’s wish.
​It was a thrill to be named Best Individual Fund-raiser for 2011 by the Queensland Branch of the Australian Heart Foundation.
​Special thanks to EVERYONE who supported my ride.
Day 33 - May 2nd, 2011
Coonabarabran (NSW) to Narrabri (NSW)
121.3 kms. 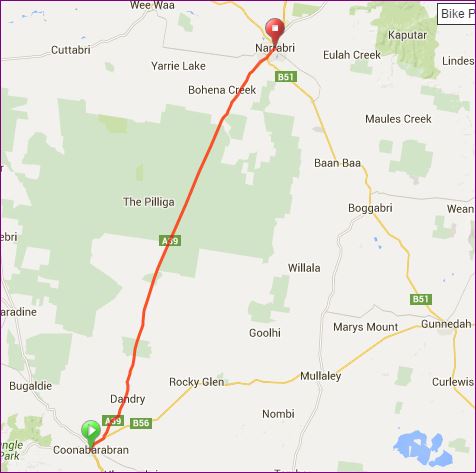 Highway 39 now - the Newell Highway - and it looks a pretty straight road today and after an initial climb - it's downhill to Narrabri.

Narrabri is situated on the Namoi River at the junction of the Kamilaroi Highway and the Newell Highway. The opulation is around 6000, and it is a major support town for local rural industries. Barley, canola, chickpeas, cotton, faba beans, field peas, linseed, oats, sorghum, soya beans and wheat are all grown here.

As a result of the geography of Narrabri and the surrounding areas, Narrabri Township is quite prone to flooding.

Before the arrival of the Europeans in the early 19th century, Narrabri was the home of the Kamilaroi people, who still constitute a significant fraction of the local population.

It is the centre of a major cotton growing industry. Other agricultural industries in the area include wheat, beef and lamb. Nearby attractions are Mount Kaputar National Park, the Australia Telescope Compact Array at the Paul Wild Observatory (administered by the CSIRO) and a number of agricultural centres, including the Australian Cotton Exhibition Centre. Just to the south of town is the Pilliga Forest, the largest remnant temperate forest in Eastern Australia. Narrabri also boasts The Crossing Theatre, a 1000 seat auditorium and cinema complex of a standard normally only found in larger Australian communities.

The Narrabri Shire has also laid claim to the title of "Australia's Sportiest Town", according to NBN TV's "Today Show". This is backed up by a large number of ovals and Sporting Clubs within the shire.

It was decidedly “nippy” this morning – as well as “foggy” – pretty much like an autumn morning in the Waikato!! I think this was the second morning that I have set off with my jacket on to keep me warm!! Fortunately after the first hour I was able to discard the jacket as the day turned into a nice fine one!!

I chatted with folk at the park last night who had come from the North and they had informed me that it was a pretty flat ride for me today. I was somewhat reluctant to believe them having looked at my elevation map, but it is funny how sometimes these trips ride better than they look – or – worse than they look!!

The first 20 kms of today’s ride was definitely tougher than I was expecting – this was probably because my legs were still weary from yesterday’s climbing. The sad thing is that I could not get benefit from the downhill stretches. I know I must sound like I am nagging on and on about the state of the roads, but the corrugations, rough surface and wash-outs are very tough on my hands and wrists in particular, and to a lesser extent elbows and shoulders. My rest breaks these days are more to shake the creaks out of my arms than to rest my legs!!

After my second major stop (two thirds of the way) the road turned into a flat, maybe slightly downhill run into Narrabri. The wind even became kind and decided to push me along!! I liked that!!

I had obtained a brochure about Narrabri from the Visitor Information Centre at “Coona” (locals "speak" for Coonabarabran) and was quite excited to see that I had a choice of 4 camping places for the night. One called the “Big Sky” caught my eye as it was virtually in the middle of town, next to a swimming pool and surrounded by a park. Two others were on the road into town, but about 2 kms short of the city centre – and then the fourth choice – was the “Running Bare Nudist Retreat”!!!!!!! Well – I know I was looking forward to getting out of my “lycra gear” particularly for my rest day  – but whoa - …………… nope – Big Sky Caravan Park won the day!!

We had arrived in time for a quick look around the town – and our first “supermarket” since Broken Hill. Even managed to find a couple of great wine shops to choose a nice bottle or 6 from!!!!

We have to look at the back wheel of my bike as this “bulge” in the tyre is not improving, its not really worsening either - but it is a little unsettling to me, particularly on downhill stretches. However – too tired to do anything about it tonight – it’s a rest day job for Pat!!