All funds raised during my ride across Australia went to either the Australian or New Zealand Heart Foundation depending on the donor’s wish.
It was a thrill to be named Best Individual Fund-raiser for 2011 by the Queensland Branch of the Australian Heart Foundation.
​Special thanks to EVERYONE who supported my ride.
Day 15 - April 14th, 2011
Penong (SA) to Ceduna (SA)
79.5 kms. 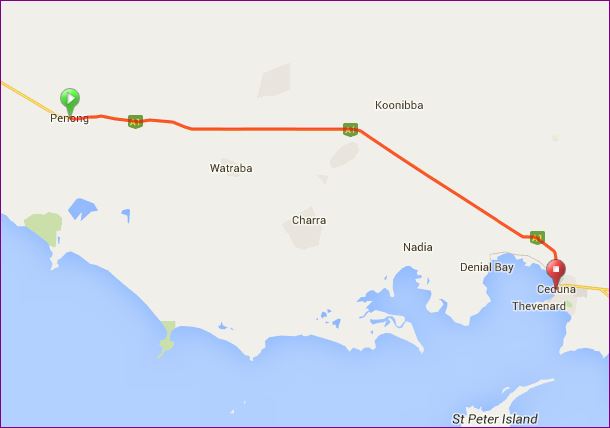 Today, I feel like we are heading back to civilisation as the Eyre Highway takes me into the seaside town of Ceduna this afternoon!!

Located on the scenic shores of Murat Bay, Ceduna is a town of some 4000 people supported by a number of local industries, including wheat farming, gypsum mining, salt mining, and commercial fishing for a number of local fish species such as the much renowned King George Whiting, Snapper, Garfish, Prawns and Lobsters which are known to South Australians as "Cray Fish".(Pat will love it here)!!

Recent developments have also seen the discovery of 6 heavy mineral sands deposits within the "Eucla Basin". These extensive mineral sands range eastwards of Ceduna through to Western Australia. Locally, the Iluka Resources company has 2 particularly promising Zircon sands deposits within the Jacinth-Ambrosia and Dromedary tenements, and the development of these 2 mining prospects will soon see Iluka Resources become a leading exporter of rare Zircon sands to the steel industry, and "high tech" ceramics and electronics components manufacturers around the world.

There is actually a range of shops here - such as we haven't seen since Norseman, way back on Day 5!!!!

There is also a Bowling Club - with seafood AND bowls - Pat will be in heaven!!

It looks like I am 3 days ahead of schedule - but that is not quite so. Tomorrow I will definitely be taking a rest day - here in Ceduna!!

Todays ride would have to be the nicest I have had so far!! Very pleasant countryside, easy uphill stretches early on, and then that wonderful cruise downhill into Ceduna - on the edge of which was the South Australian quarantine checkpoint. I had no fresh fruit or vegetables with me so was allowed to proceed straight thru - Pat and the van on the otherhand had to be checked!!

First stop was to play the last 2 holes of the longest golf course in the world at the Ceduna Golf Club. Nice wide fairways, but peculiar greens that involved the caddie in much more work using the supplied "rake / roller" to smooth out a fine dark gravel like substance to give the player the best opportunity possible to putt successfully!!

Once done - into the Ceduna Information Centre to get the certificate for completing the course!!! A "net" 69 - no penalties taken for the crow interference!! If anyone crosses the Nullarbor - it really is a fun thing to do!! You meet some great "golfers" doing it!! It is a real surprise package and I am sure will be a talking point well into the future!!

Actuality the enormity of my ride really hit me while at the Visitor Information Centre. There was a huge map of Australia on the wall - I looked at Perth, and looked at Ceduna and just thought WOW - I have biked that far!!!!! I then looked at Brisbane - and thought - OMG - I have that far to go!!!!!!

Finding a place to stay in Ceduna for 2 nights was not the easiest thing!! The three caravan parks were pretty much full!! According to the Visitor Information Centre there was a heavier amount of "grey nomad" traffic around the Eyre Peninsula area as people had chosen to holiday here instead of the flood ravaged Queensland! It is also the time of the year that many "regulars" stay for 4 to 6 week periods to catch the famous King George Whiting.

We went to the Shelly Beach Caravan Park who charged a pretty hefty amount and said we could go through to a part of the park they were "developing". When I got there - it was nothing more than a "rough as guts" horse paddock. I headed back up to the office and said I felt I had paid to be in a caravan park, not a horse paddock - was anything else available, I'd pay a bit more for a powered site even. She offered me a site for one night, and advised I would have to be in the paddock for the second night.

We were lucky to "chat" with a very friendly fisherman, who not only provided Pat with some beautiful fresh fillets of the famed "whiting" but also allowed Jucy to cuddle up next to his camper-trailer for the second night of our stay, thus saving us from a night in the horse paddock!! According to the friendly fisherman (who comes here every year for 6 weeks) the "developing" area we had been sent to as been like that for the 12 years he had been coming to the camp!!

After giving my bike a thorough clean and check over, I was able to attend to emails, quickly check Facebook, and post some entries to this website!!

Meanwhile, I think Pat will gladly retire her (my) golf clubs to the "Penthouse" for the rest of the journey, and is looking forward to getting out her Drakes Pride International bowls and heading to the Ceduna Bowling Club tomorrow. I can hear her saying to the crows - try stealing these!!!!!!!

Meanwhile - check out the new page - "Competitions" - and have a go - from distances published you should be able to get pretty close!!!!
When I go biking, I repeat a mantra of the day's sensations: bright sun, blue sky, warm breeze, blue jay's call, ice melting and so on. This helps me transcend the traffic, ignore the clamorings of work, leave all the mind theaters behind and focus on nature instead. I still must abide by the rules of the road, of biking, of gravity. But I am mentally far away from civilization.
The world is breaking someone else's heart. - Diane Ackerman