All funds raised during my ride across Australia went to either the Australian or New Zealand Heart Foundation depending on the donor’s wish.
​It was a thrill to be named Best Individual Fund-raiser for 2011 by the Queensland Branch of the Australian Heart Foundation.
​Special thanks to EVERYONE who supported my ride.
Day 12 - April 11th, 2011
Eucla (WA) to Nullarbor (SA)
206 kms 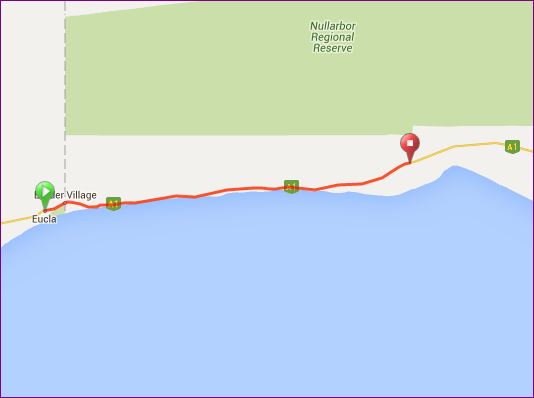 A long ride scheduled for today, but that's just the way it is between roadhouses here!! Still pretty flat really, that's good - and will finally get to South Australia!! This is right in the Nullarbor proper now - even though the road looks close to the sea on the map - I don't think I can see it as I bike along the Eyre Highway.

In 1866 E. Alfred Delisser surveyed the Nullarbor Plain and noted a marked absence of trees. Contrary to some popular opinions the word Nullarbor is not of Aboriginal origins. In fact the local Mirning people referred to the area as "Oondiri" which is said to mean "the waterless". Delisser derived the term Nullarbor from the Latin "nulla" for no, and "arbor" for tree. Hence the term Nullarbor meaning "no trees". In the 1870s and 1880s vast areas of the Nullarbor were leased to sheep graziers with many sheep stations later being incorporated into the vast Fowler's Bay run that stretched from Streaky Bay in the East to areas even further west of Nullarbor Station - a distance of over 400 kilometres! Today just about all that remains are abandoned homesteads.

Nullarbor Links is an 18 hole par 72 golf course, said to be "the World's Longest Golf course", situated along 1,365 kilometres of the Eyre Highway. (We will be carrying basic golf gear so we can have a crack at this course!!)

The course begins and ends (depending on the direction of crossing) in the goldmining town of Kalgoorlie, Western Australia and the coastal town of Ceduna, South Australia.

Professional golfer Robert Stock, from Manchester, England, consulted on the design that incorporates 7 holes from existing courses and 11 holes created at roadhouses and roadside stops. Newly constructed holes have tees and greens that use artificial grass, with natural desert land between.The idea for the course came from Alf Caputo and Bob Bongiorno, both active in the Eyre Highway Operators Association, over a bottle of red wine at the Balladonia Roadhouse. The course officially opened in October 2009.

Today was supposed to be a quiet day – but turned in to be the biggest day of cycling yet - distance wise anyway!!! It was another good news / bad news day. Didn’t hurry in the morning and gave the bike a pretty thorough cleaning and check over. Everything was good! Then off to play the Eucla golf hole – I opted to ride as the lady said the turn off was only 500 metres up the road. What she omitted to say was that the hole itself was a further 6 kms up that road – a gravel one!! So slow progress for me up there! Hole duly played with nothing impressive to note (no lost balls, tees or ball stealing crows). I put the bike back in the van for the journey back to the main road – and then it was on with the journey, somewhat excited as the WA / SA border was not far away!!

I got quite a buzz to think I had at least biked right across Western Australia!! In fact, from the sign-post there, I have covered roughly a third of the journey!!!! 1500 kms done – 3000 to go!!!! 11 days of biking and one rest day to cross one state!! I took note of my odometer reading exactly on the border – and if you look on the new page on my website called “Competitions”  - you too could be enjoying Morish nuts as much as I have been!!!! I can put the border crossing km recording in now - it was 1490.84 kms from Scarborough (WA) to the WA/SA border.

A few metres further and we were at Border Village – I had read there was an “internet café” there. I thought my day was done with biking, now a relaxing morning tea, lunch and an afternoon catching up with all my computer “stuff”. How my jaw dropped when I was advised the system was no longer – the pure cost factor to get the signal etc etc  had  not been recouped by the owners so they had given up with it – but – they assured me – I would be right at the Nullarbor Roadhouse.

To get my head around having finished my day of cycling – to thinking shall I / shan’t I try and make another 160 kms before dark was a bit of a problem. A quick check of the maps showed there were some “free-parks” along the way, so if the going got too tough – I’d call it quits and we would stay in one of these.

The good news then was that the road seemed to be either perfectly flat, or slightly downhill with a slight tail wind, cloudy and a bit on the cool side – could it be better for cycling?????? I was able to hum along, and the kms were flying by!! Frequently I was zooming along at 40 – 45 kph, a speed I never thought I was capable of sustaining - the tail wind must have been more than "slight" I think!!

I must add here, that there is a noticeable difference in the Eyre Highway in South  Australia compared to Western Australia – with the roads of the West being much better I have to say!! The shoulder is very narrow now, and many stones from the sides were on the road surface. I tried to avoid hitting most of them, but a lapse in concentration resulted in a large “bang” followed by a  very deflating feeling. Thought it was a blow-out, but luckily it was just one of those “snake-bite” punctures caused by hitting a stone. For a moment I felt like Lance Armstrong – again, the God’s must have been smiling on me – I had just whirred past where Pat had positioned herself for some reading – so I raised my hand – the “support car” cruised up, my spare front wheel was taken from the van and swapped to my bike, and I was off and running in the time it took me to take some gulps of Endura!! What teamwork!!

Between the puncture and Nullarbor, we all got rather excited to see another “Jucy” approaching us as it was heading west. Toot-toots and waves all round – what a good feeling!!

Again the last 15 – 20 kms of the day really started to get to me, and it was hard-going. As well, it was getting pretty dark, and although lit up like a police car with flashing lights all over me, I prefer not to be on the road in those circumstances. After over 200 kms for the day the lights of the Nullarbor Roadhouse were a welcome sight although it seemed to take forever to get to them.