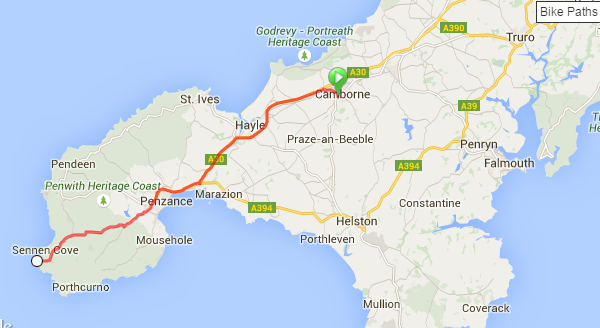 How exciting – by the end of today’s ride I will be able to call myself an “End to Ender”!! The sad thing though is that it was a very dull, drizzly day. While I only had 45 kms to ride, it was going to be a bit hilly so wouldn’t be a total “cruise”. I thought about waiting to see if the weather would lift or not – but in the end – just wanted to push on and get there!!

While I didn’t enjoy riding in the rain, I couldn’t help but thank my lucky stars for the weather I had enjoyed throughout the trip – it really hadn’t been too bad at all. Today, my last day, was the first day that my socks and shoes got soaked through. If anyone had said I would have only had 1 day like this before I set off I would never have believed them!!

The first 25 kms to Penzance went really well despite the rain. These ups and downs were fine and not too taxing at all. It started to get really exciting – Land’s End – was now appearing on the sign posts for the first time!!! The count-down was on!!

On leaving Penzance – with “only 20 kms” to go – the mist rolled in from the sea. I had brought bike lights with me but had felt wearing my fluoro hi-viz jacket was sufficient to keep me visible on the road. This was different though – so I stopped and put my lights on. At times I couldn’t see more than 3 or 4 car lengths in front of me. Pat rang back and said it was terrible at Land’s End –she couldn’t see a thing! The misty drizzle seemed to settle on my glasses which required constant wiping so I could see at least a short distance in front of me. The predicted “sou-wester” had shown up – the elements didn’t want to make it easy for me!! I got a kick seeing cyclists heading off in the other direction - what a shocker of a day for them to start - but at least they had a tail wind!

There were not quite as many hills as on the way to Cape Reinga, to finish the New Zealand ride, but it was eerie just how similar the day was, particularly with the rain, low-cloud and mist.

When I arrived the parking attendants gave me a big cheer and clap, and Pat was on hand with the camera!! It felt so great to have made it!! It is MUCH more commercial at Land's End compared to John O Groats. They have a "Start" / "Finish" line all marked out where cars can't go. Once over the line you have to walk through quite a few tourist-type shops to get to the famed Land's End "sign".

I couldn’t wait to stand there and get my pic, know that I had “done it” and to reflect back that 3 weeks ago I was at the John O' Groats sign. What a thrilling 21 days of cycling over 1641 kms (1020 miles) - so many wonderful memories and pictures in my mind.

I have to say what I discovered was the biggest disappointment of my whole trip. To get to stand right beside the sign you have to use the professional photographers  - otherwise - stand behind the roped off area!! This wasn't the case at John O Groats - nor at either end of New Zealand - and I hope it never happens at any of those places!! We took our own photo's - and the 12.50 pound fee the photographers charge - I have paid to The Fred Hollows Foundation. On principle I wouldn’t “pay” for a photo!

Amazingly, the mist rolled away as we took pics - that was just like our NZ finish too!! It was lovely to soak up the atmosphere and the view!

Two guys arrived on big motorbikes – they had ridden the distance in 22 hours, raising money for cancer – and were equally disappointed with the professional photography bit. They took our pic – and we took theirs!!. While comparing the width of bike tyres – I couldn’t believe that my back wheel had gone flat!!!!!! Finn had done so well – and I am still going to claim I completed a puncture free ride – this was after all – after the finish line!!!! For my previous rides, I had always put brand new tyres and tubes on at the start of the ride. This time I had left the bike as it was and taken 2 new spare tyres and 4 tubes – thinking when I got a puncture I would replace them. How unreal to get all the way without needing to!!

The guys on the gate told us to go to the local pub for a meal and a drink - which we did. Pat swore it was the best bowl of seafood chowder she has ever had, and my roast was jolly good too!!! In the hotel, pinned to the ceiling are lots of jerseys from various End to End expeditions.

A big thanks to Pat for her solid support throughout the journey and thanks to Pauline too for the time she was with us. Also to everyone who liked and commented on my posts on the facebook page at the time. It always gave us such a kick to log on and read what you were all writing.

To the supporters and donors to The Fred Hollows Foundation - a very special thanks - thrilled to know my efforts will have helped more people receive sight saving operations!! 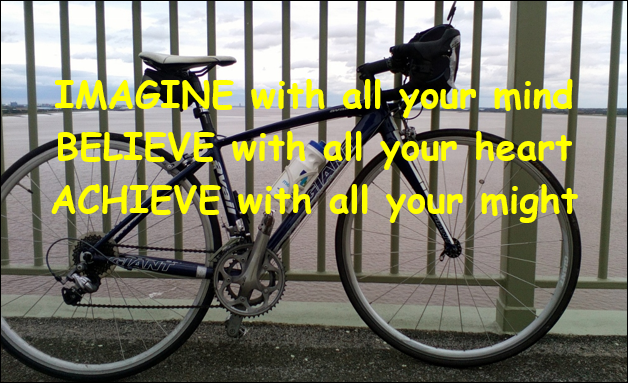