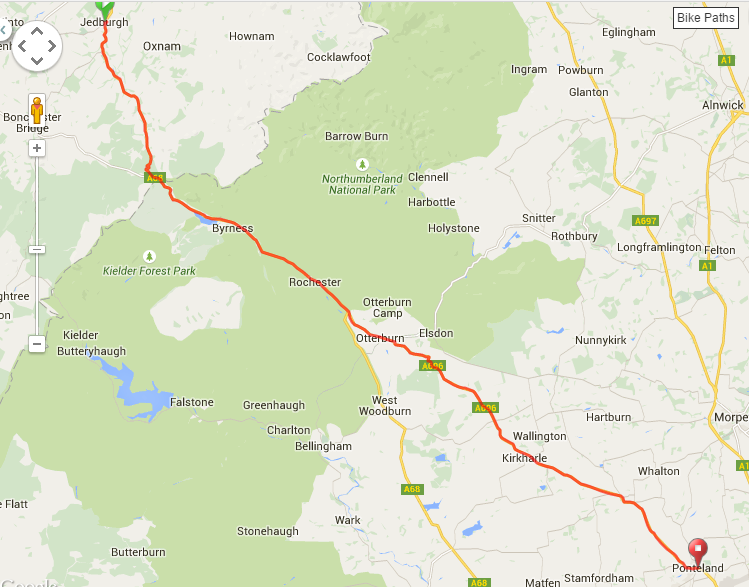 Day 9 of cycling – and I only had about 10 miles to ride and I would be at the Scottish / English border. I never in my mind thought Scotland was so big! It had always looked like this little bit of land at the top of England – but on this trip – 9 days of riding would see me through Scotland and a further 12 days would get me to the bottom of England. I would never have thought that!!

Today had a lot of climbing – it’s pretty much a 15 km climb from Jedburgh to the border – not overly steep but it seems to go on and on forever. When you glimpse up you can see the road winding back and forth as it climbs upwards. My thought pattern was – it will take a long time – but I will get there – pedal, pedal, pedal!!!!!

I did stop at one stage going up the hill – who would have thought there would have been a 2 pound coin on the road in the middle of nowhere!! What is it they say about the Scots?? I picked it up and continued on my bike.

The views from the top instantly wipe away the distressing feeling of tiredness from so much climbing. Not so much looking towards England – but looking north to Scotland is just amazing!! We were lucky enough to have a pretty clear day so that we could see for miles. I can imagine that the weather often prevents this view from being seen. I suspect that was the case when we drove north on this route in the 90’s – to me it is one of those unforgettable views but I hadn’t seen it before.

We enjoyed a long stop at the top and took lots of photo's. There was a Scotsman - in all his traditional dress who was setting up to sell CD's of his bagpipe playing. We kept hoping he'd set up and start playing, but he seemed more intent on not doing that. He could have done himself out of a couple of sales!

The “crew” had earmarked Otterburn as our morning tea stop – and the ride there was, of course, predominantly down-hill. The brakes sure got a good workout, as for various reasons it didn’t feel safe to just let fly. In the main it was the twisty nature of the road, and the way that the wind could catch you as you rounded a corner and out of the shelter that made me very wary.

I was feeling pretty chuffed – finally I had ridden through a country without getting a puncture!!!! I felt I shouldn’t be saying this at the time as I was tempting fate – but I just felt so chuffed to have done so!!! Normally before any ride like this I put new tyres and tubes on my bike before setting off. For this tour – I didn’t. I took 2 new spare tyres and half a dozen tubes with me – with the thoughts that the moment something went wrong - on would go the new gear.

We stopped as planned, for morning tea at Otterburn at a roadside cafe/grocery shop as I was too lazy to ride down a hill (because I would have to ride back up it) to the Otterburn Mill which had a great tourist trade. The little cafe turned out a super choice - delicious fruit and cheese scones were fresh out of the oven - yummmm - and Oyster Bay Sauvignon Blanc was on special at a comparable price to what we pay in Australia - so a purchase was made!! While I continued on my way Pat and Pauline visited the mill and I believe were tempted to buy some of the lovely wool products.

We left the A68 as I wanted to head in a more easterly direction and continued on the A696. We had a quick stop at Belsay (more castles) and eventually arrived at Ponteland. I had a phone message to stop and wait at the Diamond Hotel – which I did manage to see and do. Pat and Pauline checked out a couple of accommodation options and we ended up staying at this delightful English “pub”. The Diamond Hotel was built in the 1700's - but the rooms had been beautifully refurbished and it was a great stop.

Pauline’s ankle has improved and she was able to manage a stroll around the town, as did Pat and I. It was a pretty place - a “my size” town.

After having listened to Scots accents for the past 10 days – some readjustment was now required. I was completely bamboozled when I went down into the pub with my notebook and asked how I could get on to their advertised “free wifi”. I thought the Bar Manager said to me – “Have you got your CORD” – feeling rather puzzled I started to reply that I didn’t need one as the battery was full ………….. and the penny dropped she actually meant did I have the CODE – duh!!! I had to really concentrate when listening to these guys speak!! Anyway after she gave me the “code” I was up and running on yet another dodgy wifi service that wasn’t very reliable at all and caused lots of frustration trying to book accommodation for the next night.

We opted for the pub roast dinner and a most welcome “pint”. Love the way beer is served in glasses branded with the beer name. It amused us that the kitchen was on the first floor, and our meals came zooming down on the “dumb-waiter” near our table.

So here we are - the Scottish section of the ride is over - and now on to England!!! 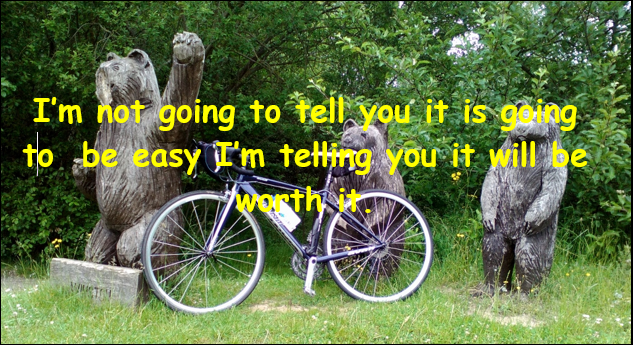