All funds raised during my ride across Australia went to either the Australian or New Zealand Heart Foundation depending on the donor’s wish.
​It was a thrill to be named Best Individual Fund-raiser for 2011 by the Queensland Branch of the Australian Heart Foundation.
Special thanks to EVERYONE who supported my ride.
Day 32 - May 1st, 2011
Gilgandra (NSW) to Coonabarabran (NSW)
96.1 kms. 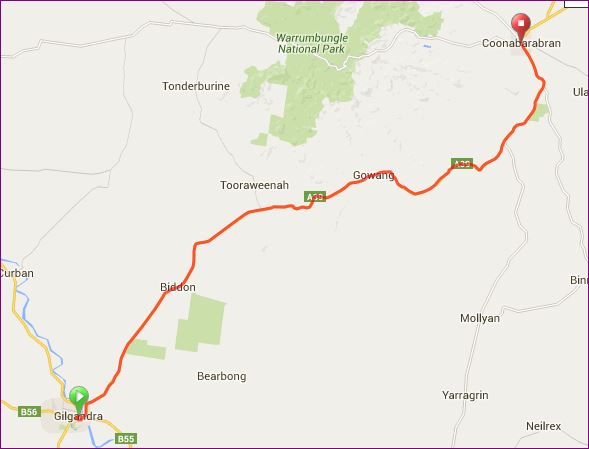 It's Labour Day in Queensland - but I am still in NSW so nothing is closed! Today I head along the A34, the Oxley Hghway, for Coonabarabran - I like that word!! This part of the road is also the A39 - Newell Highway.

I don't really like the look of the elevation graph though - there's a fair bit of climbing there methinks!!

Coonabarabran is the gateway to the Warrumbungle National Park and the Pilliga Forest. A central feature of the town is the Town Clock which is situated in the middle of town at the intersection of John Street and Dalgarno Street. Coonabarabran is the closest town to the 3.9-metre Anglo-Australian Telescope, the largest optical telescope in Australia, situated on Siding Spring Mountain. A number of other telescopes are in use on the mountain with many of them operated by the Research School of Astronomy and Astrophysics of the Australian National University. There are a total of 12 telescopes currently on Siding Spring, with a thirteenth currently being built. This is the Skymapper Survey Telescope of the ANU. Siding Spring is also home to the Uppsala Telescope where Dr Rob McNaught discovered his now famous daylight comet C2006 P1 McNaught in August 2006. A recent addition to the town was the construction of the World's Largest Virtual Solar System.

All prepared this morning for a tough ride - shortish in distance - but some hills!! The first 40 kms were pretty easy although I could feel it was climbing all the way. Oddly, the wind started off as a head wind, changed to become a side wind, and then a tail wind - brilliant. Ater morning tea - the real climbing started as I entered the foothills of the Warrumbungles. Climb, climb, climb - all gears on the bike used - it seemed like slow progress - well, it was!!

To keep me going, I kept thinking about my neighbour who was competing in the Port MacQuarie Ironman today. Peter would have done the 3.8 km swim and be out on the bike leg and he had 180 kms to do - and then - run a marathon!!!! Why should I be complaining about my ride today!!!!!

Eventually got to the "top" and apart from the need to keep pedalling all the way up this hill, the only other slight cause for concern was three sheep roaming free on the side of the road - they seemed to take no notice of the huge trucks grinding up the hills - but stared at me as if I was mad (ok - you don't have to agree with them). All I worried about was what would happen if they bolted out in front of me!! Run over my a sheep!!

The "Spire View" stop at the top was a nice place to have lunch. The trip into Coonabarabran from there was undulating with only one short sharp climb about 5 kms out to finally kill my legs and render me legless (again)!!!

The roads continue to be very rough indeed - I know recent flooding has led to damage to the sides and shoulders of the roads, but the whole surface seems wavy and bumpy and corrugated. It shakes and jars through my wrists, arms and shoulders incredibly, and is not easy on the old body!! It has resulted in not being able to enjoy the swooping downhills as really reaching anything over 45 kph felt dangerous. At the risk of "narking on" - how I wished they were like the Western Australian roads!!!!!!

It is not just me that speaks of the roads either, my neighbour in the caravan park remarked that everything in their cupboards got shaken around and many things fell off shelves etc!

There has also been an appreciable increase in road traffic - we must be back in civilisation!! Trucks in particular, even though it is Sunday. It is a pretty major route from Melbourne, through Dubbo to Brisbane. Gilgandra told me the worst day for trucks would be a Tuesday - wow - thank goodness I have a rest day that day!!

This must also be the main road to an abbattoir or freezing works!!!! Several huge stock trucks passed me - and I must say - they are not the most pleasant type of truck to pass a cyclist!!! I guess you can't blame the poor stock on board - if I knew I was being carted off to where they are being carted off to - I would probably be doing the same bodily functions that they were doing!!!!!

It is pretty cool here tonight, and by the colour of the leaves on the poplar trees - it is most definitely autumn. They look very pretty, and keep the street workers and gardeners very busy. "Fall" is quite a bit ahead here compared to Gilgandra where the poplars were still green. The mix of gum trees with poplars and other deciduous trees makes for a very attractive countryside.
Lie flat on your backs, class, and circle your feet in the air as if you were riding your bikes,
said the gym teacher. “Fred! What are you doing? Move your feet, boy.”
“I'm freewheeling, sir.”