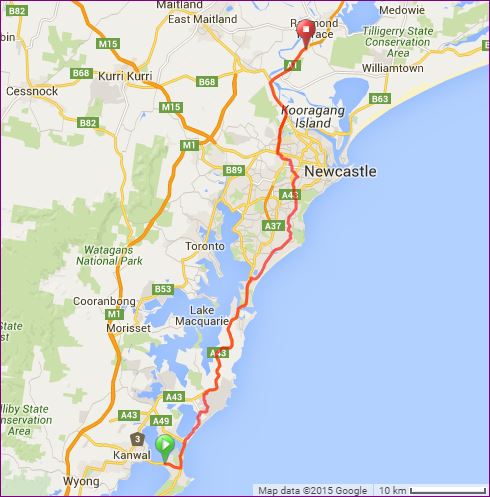 Beautiful morning at Canton Beach – still N / NE winds, but they were pretty light. Another area of the country that I am totally unfamiliar with, but in an attempt to get lighter traffic we took a more coastal option to start the day. It was very pleasant cycling and it didn’t take too long to get to the town of Swansea – and library – not that I was doing my normal Thursday Library ride – but nonetheless – if I lived there – this would have been on my route!!

We had all experienced a few little niggles with our bikes, so we attempted to find a bike shop, and after asking a guy riding a trike along the bike lane we were using – Belmont was going to be the best place to stop.

After passing through Belmont we easily saw the Giant sign of Hadley Cycles – so called in. Don purchased a couple of new tyres as since his puncture the previous day he wanted the added comfort of knowing his tyres were in good repair. A new tail light for Annie’s bike, as hers had flown to bits  at some stage, and their mechanic gave the gears on both my bike and Annie’s bike a quick tweak. I think he suggested a bit of a clean and a lube was required – sorry Finn – I’ll do it tonight!!

We took the Newcastle by-pass road which did have a good wide cycle lane marked on it, although it was very busy traffic wise. It was also very hilly – with one in particular taking us to the suburb of the very aptly named New Lambton Heights. We crashed roadside at the top to take time to recover. Funny how these roads all look flat on a map!! Always the gift from a climb is a wonderful view - and it was great looking over Newcastle from here.

I never felt we were getting good "bang for our buck” on the ride this morning. We seemed to do heaps of hill climbing and yet the downhills were over in a flash. So unfair!!

I had spotted a suburb named Sandgate on the map, and as we will be riding through the Qld Sandgate on our last day, we attempted to go through it. Well, we found Sandgate Rd, but as for a shopping area or main street, it certainly wasn’t in the area we were. A friend had told me prior to leaving Brisbane that this Sandgate was the “dead centre” of Newcastle – but somehow – I didn’t even see the cemetery!!

With lunchtime upon us we went into the Hunter Valley Wetlands Centre for lunch. It is a great centre and we saw lots of birds and plants, and listened to the happy chattering of groups of school kids who were visiting and learning about the environment. However $34 for 2 wraps and 2 milk-shakes which were nothing special at all seemed completely over the top – and I am afraid the HVWC will be remembered as a rip-off place to eat!!

Soon back on the road – and this stretch proved to be really REALLY busy traffic wise as I had predicted. We certainly did not have a lot of room on the road – a silly narrow stretch where the Newcastle By-pass joins with the main Newcastle to Sydney road. Absolutely flat out – truck after truck after truck and many cars thrown in as well. Getting on to the Pacific Highway was via a left hand off-ramp to an over-bridge with a very narrow shoulder – so we held our breath and pedalled on. I was riding in the front, and Annie said later you wouldn’t believe how close many of the trucks were to me. I must admit, I sort of clung to the handlebars and just pedalled as fast as I could.

Once on the Pacific Highway it was wonderful to have a wide shoulder on the concrete road. Despite the constant noise of traffic, mainly trucks whoosh, whoosh, whooshing by – I did feel surprisingly safe - particularly after what we had just come through.

Signage was good to pull off on the Raymond Terrace off-ramp and the Bellhaven Caravan Park was very handily placed to lob into ………………. and to leave from the next morning.

As soon as we found our assigned cabin – owner “Ramay” trayed over a beautiful cup of hot coffee for each of us - he takes great pride in his coffee making abilities!!! This extremely interesting Pakistani man with a large white beard stayed and chatted while we drank the lovely coffee. He asked if any of us owned a shopping centre so he could be Santa at it!! An extremely interesting person to listen to on many subjects.

Again, by this stage of the day all we are wanting is to have a hot shower, to get out of our biking clothes and collapse!! Ramay also kindly gave us the use of the laundry which allowed us to get up-to-date in that department!! For dinner that night Don and Annie braved crossing an extremely busy roundabout and fetched us famed Heatherbrae Pies …….. I have to say this was miles more enjoyable and a third of the price of the lunchtime wrap!

Day 3 done and dusted, and I went to bed feeling the 3 days I feared most were now behind us. Navigation from now on should be a whole lot easier and the anxiety of busy city traffic is gone until we strike the Gold Coast and Brisbane. 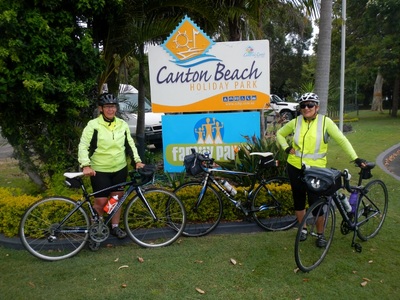 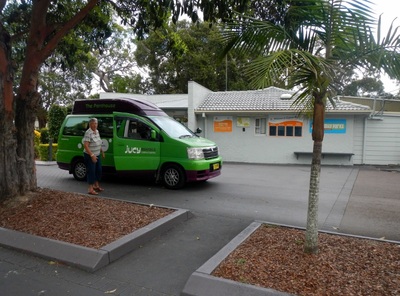 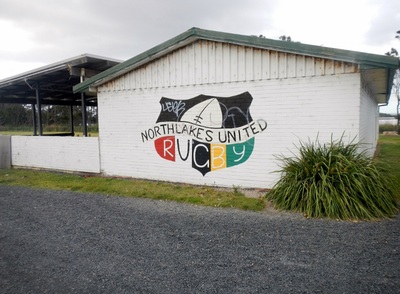 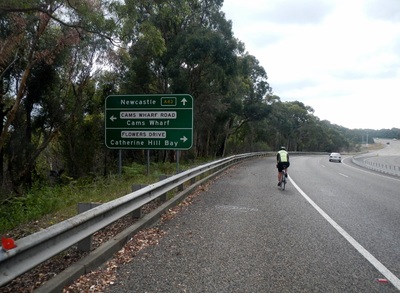 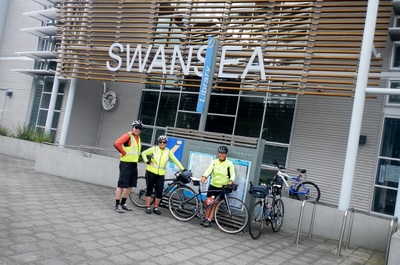 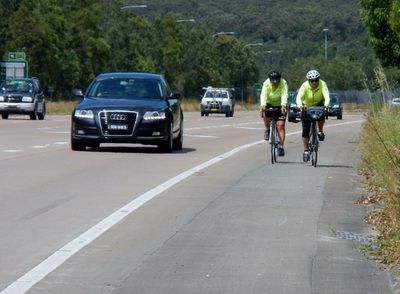 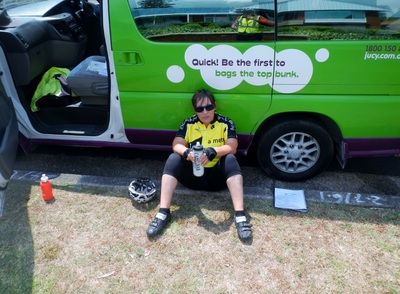 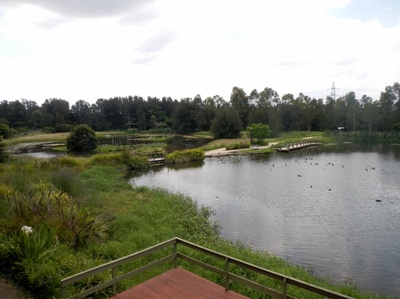 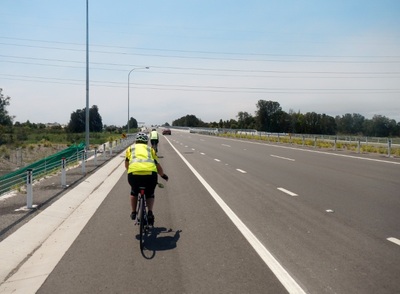 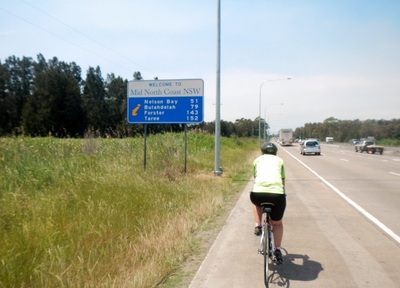 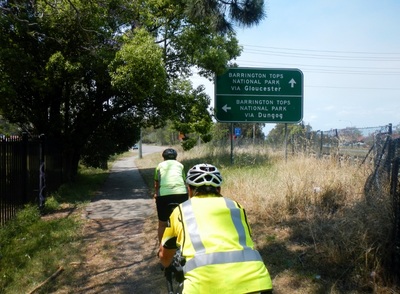 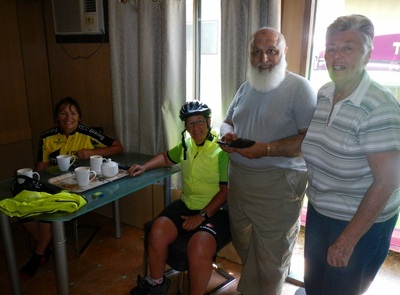 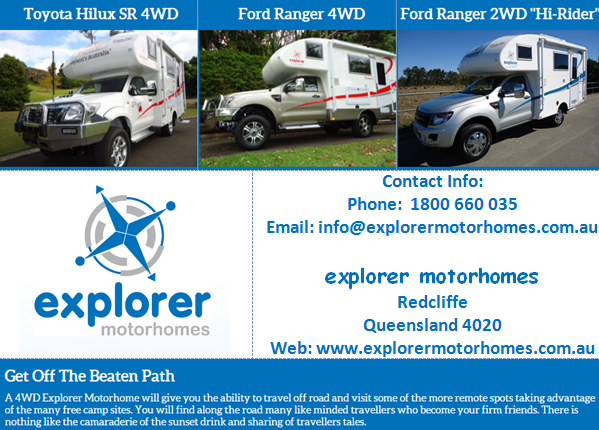 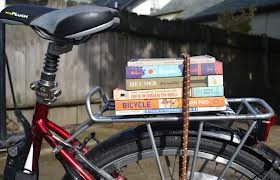 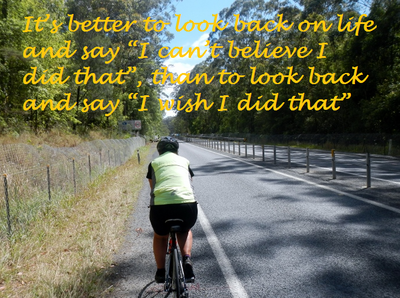