Interesting New Zealand facts:
New Zealand has a market economy based largely on tourism and primary
industries like agriculture. It depends heavily on international trade, mainly with Australia, China, the United States, and Japan. Economic free-market reforms since the 1980s have removed many barriers to foreign investment. New Zealanders are generally well-educated, healthy, and have a comfortable standard of living. 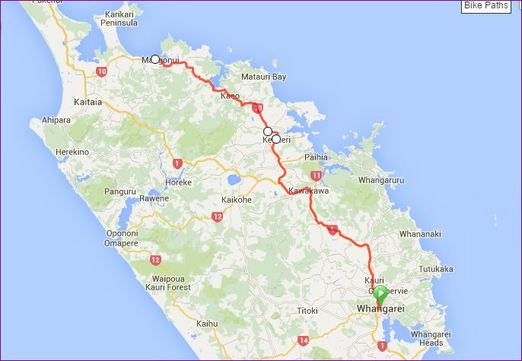 The penultimate day – and a testing one too – but through some beautiful Northland countryside. Not far north of the town of Kawakawa we will again leave State Highway 1 and take a more easterly route – heading up through Kerikeri, Kaeo, Mangonui to Coopers Beach. There will be lots of uphills and downhills – but I think less than if we stuck to SH 1, and the coastal road is more attractive.

Also more beachside small towns with better accommodation options than the other option.

The day started bright and early when Irene called by and whisked me off to Northland Classic Hits Radio Station for a live interview with DJ Mike! Always a very nervous time for me - I feel much more comfortable on my bike!!! But these are small things to do and hopefully help our fund-raising cause!!

Equally efficiently I was whisked back to "camp" - changed into my biking gear - and we were off on what originally had been seen as our longest day distance-wise and also through the hilly areas that Northland has!! We had also decided to take a loop through Margie's home town of Kerikeri.

The very efficient Irene had thought of everything and through her "contacts" she had put it out among trucking firms that we were on the road - and could they please take care!! I am pleased to say that this worked - on roads that have very little shoulder in many places we had absolutely no incidents with trucks - they were all exceptionally polite often pulling to the other side of the road to pass - oncoming traffic permitting!. Thanks very much for doing that Irene.

The weather Gods certainly did not smile on us today and about an hour into the ride, it started to rain - and only got worse as the day progressed! It has been years since I have driven through this area - and when I did - I wasn't seeing it through cyclists eyes!!

First major stop was at Kawakawa, where the railway line goes through the main street of the town! Took this opportunity to have a nice hot coffee - at the Station cafe. Moving on from here we passed through Moerewa - and up that nice big hill as you exit the township.

Short of Kerikeri - that dynamic duo - Shona and Irene - toot-toot-tooted happily past us! About the same time we were joined by cyclists from Margie's Club - so a sodden but happy group arrived in Kerikeri for lunch. For some reason the rendezvous with the Kerikeri Lions Club did not work out - but they have subsequently donated $500 to our cause which is terrific. Margie's multiport club the Kerikeri Striders also came to the party with $200 - great!

It wasn't easy starting again after being in a warm room - but we were back into the rain and on our way - climbing to the top of Matauri Bay and then swooping down into Kaeo. The wet roads made descending something to be cautious of - slippery road markings, and brakes on the bikes certainly not as effective in the wet!

I always thought it was much shorter between Kaeo and Mangonui - today it seemed to take forever. The good news was that my memory of the distance between Mangonui and Coopers Beach was wrong too - but this time in our favour! I hadn't been there since the Mangonui by-pass came into being - that seemed to cut a lot of distance off!!

At various stages along this section of the ride we would hear those cheery toot-toots from Irene and Shona - and then spot them standing under huge umbrella's cheering us on and taking photos. It did help keep our spirits up!!

Even though it seemed like it was taking forever, we arrived at the San Marino Motel in Coopers Beach not too long after 6:00 pm - which - all things considered - wasn't too bad. We had covered a big distance today, climbed lots of hills and also had extended breaks in Kawakawa and Kerikeri catching up with Margie's friends. This was her "home-coming" and it was good to meet her husband Mal - wearing his akubra - (he said to make the Aussies feel at home - methinks it was purely to keep him dry!)

Hot showers at San Marino Motel were sooooooooooooooo welcome and wet clothes were draped everywhere in front of heaters etc to dry out. Despite the miserable weather we could still see what a beautiful beach this is - and here we were - right on the waterfront!!

Now - there is no Zonta Group here - but - following the previous nights banquet, the ladies had packed sufficient "left-overs" into containers that we were able to amply feed ourselves in our motel with no need to venture out into the rotten weather again. Of course a Toi Toi Sauvignon Blanc set the meal off nicely - and we were all thinking - tomorrow is the last day! We will make it now!!