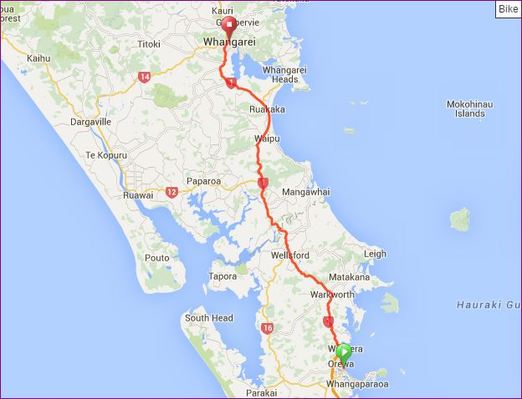 So we are all rested – and believe it or not – only 3 more days to ride!!! But don’t think they will be easy days – there are some challenging roads ahead!! I have often driven this stretch of road between Auckland and Whangarei – and there are some hills!! That major peak on the profile above is the Brynderwyn Hills. There will be frequent towns to ride through – Warkworth, Wellsford, Kaiwaka etc.

Recently a toll motorway tunnel has cut out a couple of big hills just north of Orewa – but guess what – no bikes!! So we have to ride these. It won’t be an easy day!! But I am picking we will be pretty fit by now – and just off a rest day – we’ll be fine!! It is a pretty busy stretch of road – again it will be single file riding and we will cross from the Auckland province into Northland – where we will remain to the end of the journey. From the top of the Brynderwyn’s the view is fantastic looking north to Whangarei.

By nightfall we will be in the city that I did my secondary schooling in - and we will be staying in the same camping ground that I stayed in with my family when we moved to Whangarei in 1967.

My mind had been thinking that we were now about to embark on the toughest 3 days of the entire trip!! The rest day had been great - there is so much "mind" in this ride - to keep going, keep going, keep going. At this stage, I think the mind has to take control over the body - or I know it does for me as my legs are certainly feeling pretty weary!

I had emails from a friend's son saying he would like to join us for the Orewa to Whangarei ride, and I was thrilled to see Ash Holwell at the "start line" for the day at the designated time. Quite often on a trip like this people say they will come and ride with you, but in the end - they normally drop by the way and don't show - so top marks Ash!!

In my mind, because I know this stretch of road very well, I knew this would be a huge day. I had already thought about riding the first 15 kms on the rest day as it included 3 big hills, but as we had such a shocker of a day getting through Auckland I decided no bums on bike seats for the rest day.

Thinking time could be at a premium this day, I decided we would not have any long lunch stops, but would stop more frequently for drinks, food and fruit snacks from the back of the van.

It certainly surprised me to find ourselves in Wellsford in pretty good time - especially as this had by no means been a flat ride! Just look at the elevation profile for the first 30 kms! So we stopped for a decent coffee break. The sun wasn't actually shining, but the temperature was considerably warmer than it had been and with the amount of hills we were climbing we had all started peeling off layers of clothes!! Not something we had needed to do all trip so far!

Road-works through the Dome Valley steep uphill section where Annie and I got stopped by the stop-go man was the only small part we had to walk for the day which I think shows how much fitter we have become! This is both in our cycling legs, and in our mental application when we see a long climbing hill in front of us, we just settle into a rhythm and keep on keeping on.

All day we feared the Brynderwyns the last big climb of the day, - look at them on the elevation profile - and you will see why!! It particularly thrilled me to ride up this section - I could hear my late father saying "keep going Bren, keep going Bren you can do it" - and I felt elated when I reached the top.

The view from the top to Whangarei Heads wasn't too bad for a cloudy day - obviously would have been better if it had been a bright sunny day - but hotter temperatures would have totally exhausted us too!!

We flew down the other side, and kept up a good rate along the flat section heading to our day's destination. It really helped having another set of fresh legs in the "peloton" and Ash did a lot of good work out in front.

With the second last hill completed and within 500 metres of where I used to live - I punctured!!!! Grrrrrrrrrrrrrrrrrrr !!!!!!!!! Anxious to be going the adrenalin was running, but Pat calmly changed the tyre and had me back on the road. After all the hills of the day, my legs struggled up the last hill to the "Lookout" just south of Whangarei - and although I had wanted to be at the front of the pack to be welcomed by family, friends and another group of those wonderful Zontian ladies - my legs didn't let me catch up.

But despite that - what a welcoming party - big hugs for mum - thrilled to see her there - along with my niece Brooke and nephew Trent and everyone else!! Fantastic way to be welcomed back to a town I lived in during the late '60's and early '70's!!

We wound the last few kms through Whangarei city via the Town Basin and then up to the Top 10 Holiday Park Whangarei where those Zontians had zoomed on to - and had taken over the camp kitchen and dining area and put on a splendid meal for us all!! There was everything, beautiful BBQ eye fillet steak, (thanks Gavin) plenty of pasta's, rices and salads as carb loading fuel - and desserts to die for - and after all the energy I had spent that day - I didn't hesitate to tuck in heartily!!

As well Chelsea was there from Fizeo-works and we were all treated to a leg massage - which will hopefully help us recover from all the climbing today and see us right for the next 2 days!!

It was a wonderfully social evening - and it was amazing to catch up with family and friends - but we had to remember - 2 more big riding days to come - so we all crashed into bed.

For me, I was thrilled with how this day had gone - it certainly had been a big one, I was tired, but extremely happy!