All funds raised during my ride across Australia went to either the Australian or New Zealand Heart Foundation depending on the donor’s wish. It was a thrill to be named Best Individual Fund-raiser for 2011 by the Queensland Branch of the Australian Heart Foundation.
​Special thanks to EVERYONE who supported my ride.
Day 17 - April 16th, 2011
Ceduna (SA) to Minnipa (SA)
180.5 kms. 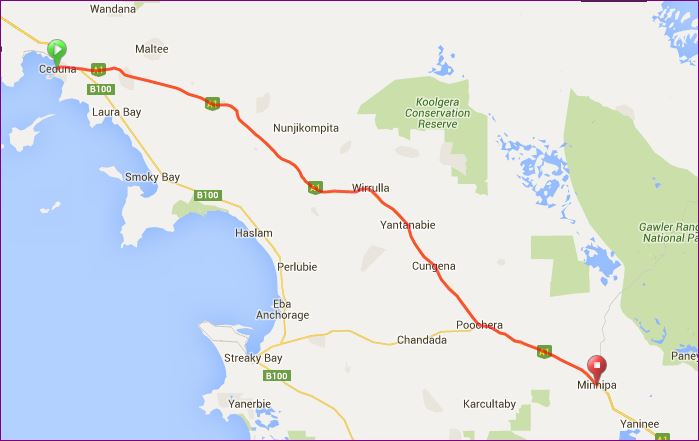 I'm picking it might be a bit sad leaving Ceduna - not the least reason being that it looks like I am starting to have more uphill than downhill as the Eyre Highway starts to head across the Gawler Ranges foothills!!!

However, I do think the countryside is going to be a bit more productive than what I have seen for the last 2 weeks.

Minnipa is a small town serving the local grain growing community located on South Australia's Eyre Peninsula. The area around the town was first settled in 1878 but it wasn't until the arrival of the railway line in 1913 that any kind of township developed. Development of the surrounding districts followed the railway, and accelerated after the opening of the water pipeline from the Tod River scheme in 1925. By 1960, Minnipa was the major railway centre between Cummins and Thevenard. Before the construction of the Tod River scheme and its network of pipelines, tanks were constructed at many locations to catch the runoff from the granite outcrops which are a feature of the landscape. The earliest of these were constructed at Minnipa Hill in 1914 by the South Australian Railways. These historic tanks were reconditioned in the 1990s and fitted with new roofs to provide a standby water supply for Minnipa.Within the town are a number of grain silos that serve to store the local wheat crop. Adjacent to the silos is a disused railway siding which used to freight the grain crop to Port Lincoln, which is now done by road transport for export around the world.

The town is well placed, within an hour or two's drive from the west coast of Eyre Peninsula but still close enough for a day trip to the Gawler Ranges. It is located in the centre of a vast low-rainfall wheat belt, and the surrounding countryside is gently undulating but broken by numerous wind-shaped granite outcrops.

Today turned out to be an easy ride with gradual climbs only that in the main were not noticeable really as they came after some good downhill spurts. Following on from my rest day yesterday my legs felt great and it was a terrific feeling biking through this lovely countryside!! Oh - there was a tail wind too which was absolutely fantastic!!

It was great to talk to mum, dad and my brother Peter before I left this morning - like many, they had been wondering where I was and how progress had been going!!!

Lunch was taken at Poochera - a place that commanded quite "bold print" on the map - but it appeared to be "empty" - well, deserted in fact!! We made lunch, ate it, and didn't see a soul! I became a bit worried that our scheduled night time stop is at Minnipa which appears insignificant on the map in comparison.

Arriving at Minnipa I was welcomed by a barking dog - already this place had more life!! Along the main street, was a hotel, motel, closed general store, closed butcher shop and an open second hand bookshop!! Checked with the helpful ladies there who pointed to where the caravan park was, but advised I had to check in at the Hotel. They also informed me that everyone was at the "football" game so I could go down there for a cold drink (I think I must have looked a bit hot and bothered after my 180k ride).

Duly set up camp and as we could hear whistle blowing and cheering still happening from the sportsground, decided to wander across and take a peek. The netball was almost over - and the locals won!!!! Jubilation!!!!

The "football" - which was AFL (and not "Union" as my kiwi upbringing always makes me think of first) was in its final quarter. The field had a small grandstand! - (very small really) and the rest of the "oval" wasringed with cars. When I arrived, the "locals" were behind by one goal. And then they scored - all (no, almost all) the cars tooted merrily - they were in the lead!! A few minutes later - the locals scored again - more tooting - and only a few minutes to play!!! But then - the "visitors" scored - a couple of "tooters" only - the score was equal - and in the final seconds of the game - the visitors hit the front with a "behind" I think they call it - ohhhhhhhhh - such sadness and dismay for the locals - one lonely car toot-toot-tooted from the sideline!!

The game over - I wandered back to "camp" - but I am sure the post-mortems of the game would continue for quite some time over several cans of locally brewed ale.

It transpired that we were the only people in the Caravan Park tonight. The on-site caretaker came over and offered us a beer (what a good idea that the Hotel owns the caravan park), which was readily accepted - on a hot dusty day - it was just the best!! Another good combination with Morish nuts!!
When I see an adult on a bicycle, I do not despair for the future of the human race.
H.G. Wells