All funds raised during my ride across Australia went to either the Australian or New Zealand Heart Foundation depending on the donor’s wish.
​ It was a thrill to be named Best Individual Fund-raiser for 2011 by the Queensland Branch of the Australian Heart Foundation.
​Special thanks to EVERYONE who supported my ride.
Day 31 - April 30th, 2011
Warren (NSW) to Gilgandra (NSW)
88.5 kms. 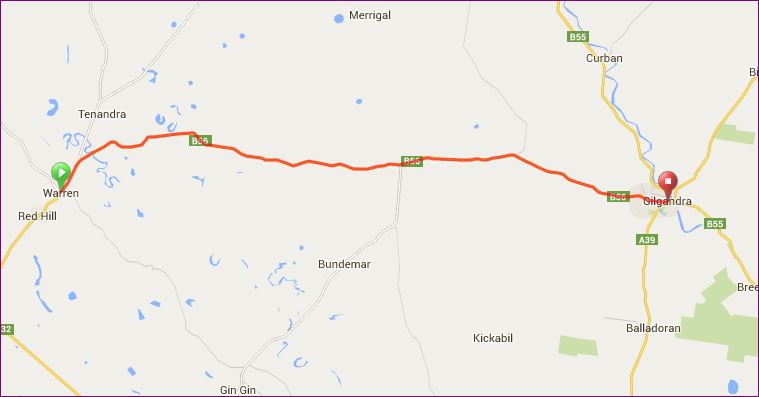 Gilgandra, is a town located on the junction of the Newell Highway, Oxley Highway and Castlereagh Highway. Like Coonabarabran, Gilgandra can be considered to be a gateway to the Warrumbungles National Park. The population of the town is about 2500, and the name is derived from an Aboriginal word meaning 'long waterhole' and may be related to fact that town stands on the Castlereagh River.

Gilgandra's annual celebrations include the Coo-ee Festival which is held over the October long weekend. There is also an Easter Vintage Farm Rally and an agricultural show in May. The feature film, 'No Worries' (1992) was produced in Gilgandra.

The geography of Gilgandra is very flat. The soil is composed mostly of sand, making it very porous and difficult to grow certain plants. The weather is hot and dry, reaching over 40°C for consecutive days during summer. In winter the temperature can reach as low as -2°C with large frosts leaving snow like blankets on the ground. During 1955, Gilgandra was flooded. This caused havoc throughout the small town with the water reaching a height of 5 ft 7ins in the main street (Miller Street).

And for Pat - there are 2 bowling clubs here!!

I can’t believe what the elevation map looked like for today compared to how it biked!! I kept waiting for hills that never eventuated – not that I am complaining!!!! It was more like a slightly steady uphill all the way – and to a motorist – I could understand if they said it was “flat all the way”.

This morning’s ride was through countryside that has recently been ravaged by floods. The road condition shows that very clearly – many warning signs for motorists that there was flood damage to the road!! The “shoulder” of the road was the worst affected so it was pretty “wavy” with the need for great care!!

I am not sure what is up with my back tyre – it is riding well – but Pat noticed a bit of a “bulge” in it this morning. We wondered whether to change it or not – whether it has “just occurred” or whether it has been like that for a while and we have just noticed it!! I have completed the 88 kms to get here on it with no worsening – so I will continue on tomorrow!! There is no bike shop in Gilgandra – I’ll ride with care tomorrow and won’t do my “daily blat” where I make an all out effort to set a highest speed for the day. You may have noticed that these are getting lower – I think that is a sign of less energy in my legs, fewer downhills, and a much poorer road surface to that in WA where I set my all time high – which I think will stand for the rest of my life!!!!!!

The land I biked through today looks highly productive. The “cotton wool” along the sides of the road evidence of the recent cotton harvest, and huge stacks of hay in paddocks look very much like what I have seen being carted to other parts of the country on huge trucks over recent days!

Gilgandra is a lovely NSW country town and the Caravan Park is right on the banks of the Castlereagh River. It is a very peaceful Park indeed and extremely well appointed!! If you ever need a break in this part of the world – here is the place to do it!!!! I believe the place is overcrowded every year for the annual "Cooee" festival!!

Pat went to bowls at the Gilgandra Bowling Club this afternoon while I relaxed, and at this very moment I am sitting around “the pit” where the Camp Manager has lit a beautiful fire.

However – we have been warned – the mouse "plague" is here too!!!!!!!! Initially we had thought we were the only ones the mice had decided to visit, but the further we travel the more it gets referred to as a "plague".

And now for the - "what a small world story" - when I arrived in Gilgandra I was waiting in the main street for Pat. A man crossed the street and said to me - "have you ridden all the way here from Ceduna?" - My reply was - "I have ridden all the way here from Scarborough in Perth - via Ceduna."  I then asked him if he was in the camp at Ceduna. Now I don't know if you will recall me writing about "obtaining" a fitted sheet for use as a bike cover in Ceduna - well this man - lived in Ceduna, and was wanting to buy some sheets for his sister who was arriving from England and they were going to embark on this camping holiday from Ceduna to the Gold Coast. He had been "lurking" in the second hand shop - hoping we would decide against getting the said sheet - so he could get it for his sister!!!!! Sorry - she missed out on that sheet - but - obviously they must have found something - as they were on that holiday!!

The camp fire here is burning magnificently and what great heat it is throwing out. Very nice.

Some other campers have arrived and their two "terrier" type dogs are running around in delighted circles chasing the mouse tracks. At least it stops them coming around the kitchen which they had begune to do before the dogs arrived.
I think this is the sort of place I could spend an extra day - but tomorrow I must press on - and tomorrow is going to be hilly!!
Chatting with your friends over dinner after cycling together makes food taste better.
Night Riders Book of Facts.