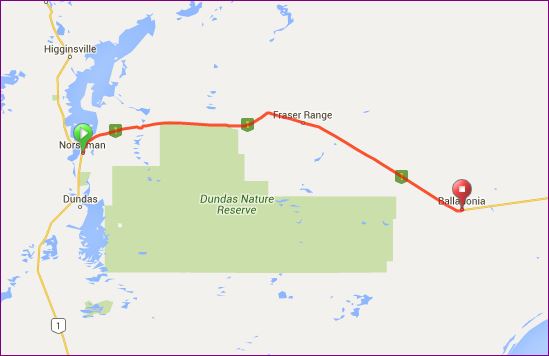 Today I head off due east again on Highway 1.The Eyre Highway is a highway linking Western Australia and South Australia via the Nullarbor Plain. It was named after explorer Edward John Eyre, who was the first to cross the Nullarbor by land. The Eyre Highway starts at Norseman and ends in Port Augusta - 1669 kms!!! That will take me a while!!

Norseman is often seen as the western start of the Nullarbor - its a very long ride today through a lot of emptiness to Balladonia.  Balladonia has a population of about 9 people - and that depends on whether you're coming or going. I wonder if this place can be described as "sprawling" ?

I will be entering the stage now of going from"roadhouse" to "roadhouse" - as that is really all there is between here and Ceduna! Balladonia Roadhouse is open 7 days a week between 7 am and mid evening, and provides an important rest stop for the traveller crossing the Nullarbor. The Roadhouse is both modern and well presented. Facilities include a Restaurant, Bar, Motel, and a caravan park with camping facilities.

More downhills than uphills today - great - and all I need is a tail wind!!

I had this day down to be the longest of the trip at 215 kms – so not only me, but my butt as well smiled with relief when I turned out of Norseman and the first road-sign said Balladonia 195 kms!!!!!!

I had spoken with a lovely gentleman at Kalgoorlie who was extremely interested in my trip, and when he saw my plan for this day had said – “No way – you’ll never do it in a day, you have to go through the Fraser Range”.

So while pleased at reading of the shorter kms, I set off towards the dreaded Fraser Range still harbouring some doubts about the day. My elevation map showed that there should be a good deal of downhill after about the first 110 kms, so that gave me encouragement that as long as I could get to the top – all would be well!!

In fact, it hadn’t seemed too arduous at all before the sign to hole No.6 of the Nullarbor Golf Course came into view. My bike hopped into the van and we drove a couple of kms in from the road to the charming Fraser Range “Oasis” run by extremely friendly folk who had only been there 5 weeks! The smile on my face was huge when they pointed out the top of the ranges – which was only a few metres higher than where I stood!!

Golf hole played - now getting used to the "natural" fairways and the artificial turf greens - so back out to the Eyre Highway, onto my bike – and it was as I had hoped - all pretty much downhill from there. I think I reached my top bike speed not only on this trip, but EVER on a particularly long downhill run – in fact – I almost fell off my bike in fright when I glimpsed at the speedo - 73.8 !!!!!!!

The late afternoon sun gets very hot on my back, and I was rather parched when I pulled into Balladonia. Golf hole No. 7 was duly played, a wonderful warm shower had, and midway through a cool drink and a bag of Morish Nuts, a van pulled into the camp with bikes on the back!!

Neil and Deborah were returning from Bicycling Victoria’s ride around the Margaret River area, so it was great to hear of their travels. Neil had also ridden the last 50 kms into camp that night.

This had been a day I had been fearing, yet the day had gone really well, the exhilarating downhill stretches had been fantastic, I felt really good – sure I was tired – but pleased to have completed the day!!

I am also thrilled that I used this weeks “rest day” earlier by visiting Kalgoorlie. Apart from the large hunk of the USA space “thingy” Skylab that crashed to earth near here several years ago, there only appears to be loads of flies and lots of dust here. A rest day here would have been dreadful!!!! (sorry Balladonia).

So that completes the first week of this big adventure. I have travelled a total of 941.92 kms - so I reckon there is every reason for my bum to be a bit sore!! That is an average over the 6 days of riding of 157 kms!!!! Hell - I hadn't trained for that!!! Not to worry - 1 week down, 5 to go!! 2 punctures in the first week - sure sounds better than 2 punctures on the first day!! Its all looking pretty good!! 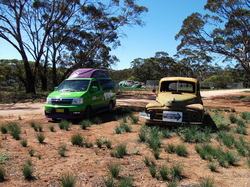 Nope, I don't think it is going to move!!
You know you are addicted to cycling when .....
you can tell your other half, with a straight face that it's too hot to mow the lawn
and then bike off for a century.