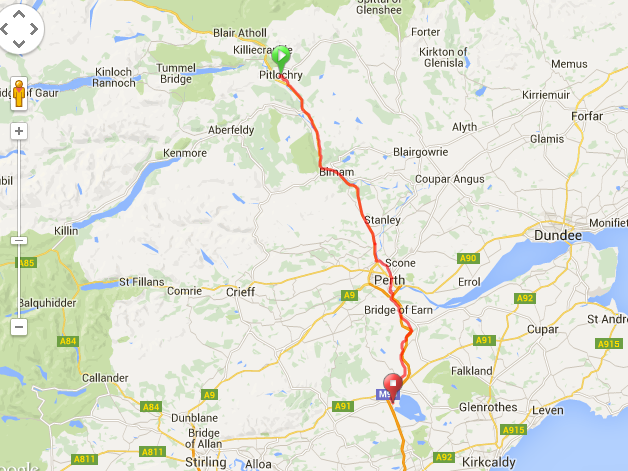 Today's supporter is funkier cycle wear. I bought my first pair of bike nicks via Wiggle, but have subsequently been able to buy them elsewhere. Extremely comfortable is all I can say - and very hard-wearing. Check out their website by clicking on their logo above - lots of other great cycling gear!!

Amazing - a peek out the window before breakfast and the weather is sunny and beautiful – again!! Are we really in Scotland?? This is superb biking weather and my sun-tan should be further boosted today!!

A wonderful breakfast menu at The Willows B & B and the "crew" tucked into scrambled eggs and smoked salmon! I went for my first Scottish Oats porridge of the trip - delicious!! None of us has been game to try haggis (yet) although we are all thinking we should before we leave Scotland!! Breakfast was beautifully cooked by Debbie, and Murray did a wonderful job of table waiter despite being blind - he was amazing!!

It was a bit of a sad night here last night as my mouse died - Pat whizzed out to get a new one as with this long daylight it only felt about 4:00 pm. She wondered why the shop was closed until she looked at her watch and saw it was just after 6:00 pm - oh well – that purchase will wait until somewhere else!

A few little things of concern about what was ahead today – we would be going through our biggest town so far – Perth. I am always much more challenged in urban areas than the countryside. Not long south of Perth there seems to be a pretty steep climb (but I am getting fitter after a few days on the road, and - I want to arrive in Kinross and find accommodation at a reasonable hour so that we can head off and do a bit of sight-seeing late afternoon.

The ride from Pitlochry to Perth went really well. Again a combination of bike-path, A9 and B roads. Stopped for a couple of pics on the way - thinking of my wonderful New Zealand friends Sandy and Jan Yarndley with the names I kept seeing on signposts!! Sandy and Jan established one of the best breeding lines of Standardbred horses in New Zealand starting with the wonderful racehorse and broodmare “Black Watch”. It was only fitting they had used many Scottish names for successive generations of successful progeny and I smiled as I passed many of those names today.

I didn’t have too bad a time getting through Perth – but then I have the luxury of being able to get off my bike and walk up one-way roads – and ask locals for directions ……… which actually isn’t always the best thing to do!!!! It was a bit more complicated for Pat and Pauline but we all managed to meet up as pre-arranged at Bridge of Earn – just south of Perth and over that steep climb on the map – well at least that was what I thought as there had been a short tough climb on exiting the city.

At last – Pat was able to get a “roll-up” with her new Taylor Bowls. The green-keeper at Bridge of Earn was at the Club and happily let her roll and watched and admired the new Taylor Vector bowls. It is such a short “outdoor” season here due to the weather, and Pat did find the greens a lot heavier than at home. She did start to get a bit more consistency after a few ends though. The groundsman had continued to maintain an "old bowls" garden although he said when he started they weren't painted in the colour of his favourite football team - so he had had to change that!

Keeping on going - I took bike paths and B roads from Bridge of Earn to Kinross - via Glenfarg. We farewelled the A9 just north of Perth as it headed off in a westerly direction and the main road south from Perth had now become the M90. As such – I was not able to ride on an “M” road. Frequently I was alongside or could hear the traffic whooshing along. I think the speed limit is 70 mph on those “M” roads, the cars certainly seemed to be belting along!!

The road to Glenfarg was definitely not flat – and I am sure there is something wrong with the elevation chart for this leg – as it was another very decent climb!! Sadly the wind had increased as well, and was a head one!

Again, I found some of the sign-posting tricky - and at one intersection there were 2 other cyclists who asked ME the way!! This I found amusing - particularly when I asked them where they were from and they replied Dumfernline (I think that was only about 20 kms or miles away)!!!! I said I was planning to go to Kinross and indicated the way I intended to go, so they followed along. We rotated the lead into the wind which was great! Another intersection - no sign of Kinross on it - I felt I needed to go right - they felt left - so we agreed to disagree and parted ways! I was very pleased to get to Kinross about 4 miles later!! I had made good time and Pat and Pauline had gone on to the next village looking for a B & B in an attempt to shorten my ride to and through Edinburgh tomorrow but with no success.

Again a few of the B & B’s in Kinross were full and our party ended up “split” for the night. Pauline stayed at the “The Green Hotel” (maybe a relative?) – it claimed 2 golf courses on your doorstep and 200 more within an hour’s drive! We stayed at the Salutations Hotel which despite a rather dodgy looking exterior had beautifully refurbished en-suite rooms.

Once settled into our respective Kinross rooms (and Finn is even allowed in the room) we headed off by car to see 2 attractions I wanted to see at Falkirk. One was the Falkirk Wheel - an amazing piece of engineering to raise and lower canal boats an incredible height, and the other "The Kelpies" some stunning LARGE horse heads.

We decided to take a “loop” tour – down the M90 and across the Firth of Forth Bridge and thus giving a bit of a clue as to what lay ahead for the first part of tomorrow’s ride and then to Falkirk via the M9. From the Motorway we saw the horse heads – they certainly were LARGE. Getting to them was another matter!!!! But perseverance and a few round and arounds and stop to ask questions eventually got us there! They were absolutely stunning and well worth the effort. Don’t get me wrong – there are sign-posts and we all learned what a motorway off-ramp number in red (instead of blue) on the map means.

There were then signs to the Falkirk Wheel which we were able to follow. A lot of locals and tourists make a day of these two attractions. They are linked by canals also – so there is a great walking / cycling tow-path that can be used. I saw a sign saying this was 4 miles – which I think is much more direct than the road system – and a trip by foot or cycle to admire both sights would be a terrific way to spend a day!!

The Falkirk Wheel is much better in real life than via the TV programme I saw, and the only disappointment to me was that we had missed the last passenger ride in a barge up (and back down) on the wheel. I have to say missing this will see me back in Scotland one day just to do it!! I must have misunderstood the guy when I asked as I thought the whole “wheel” was closed for the night (as opposed to just the rides) – so it caught us as a surprise when suddenly the wheel started to turn and we were able to see narrow boats being raised and lowered!! Incredible and stunning to watch this rotating boat lift in action!!

Thank goodness for long evenings of day-light – we headed towards home thinking we would be crossing the Kincardine Bridge, but in actual fact we went on another much more recent bridge across the River Forth, the Clackmannashire Bridge – opened in 2008. This took us on a cross-country route back to Kinross – beautiful productive countryside. We were all starting to feel quite peckish and ready for dinner (starving might have been a more accurate word) as we hadn’t had lunch. I think it was about 9:00 pm and still bright daylight. We spotted a hotel at the very small village “Crook of Devon” so headed in to eat!! This was a delightful but quaint and cosy pub – a highly entertaining publican, and interesting curio’s and collectables all around. After a beer and a hearty meal we went the final 6 miles back to Kinross. A full day – but a great day!! 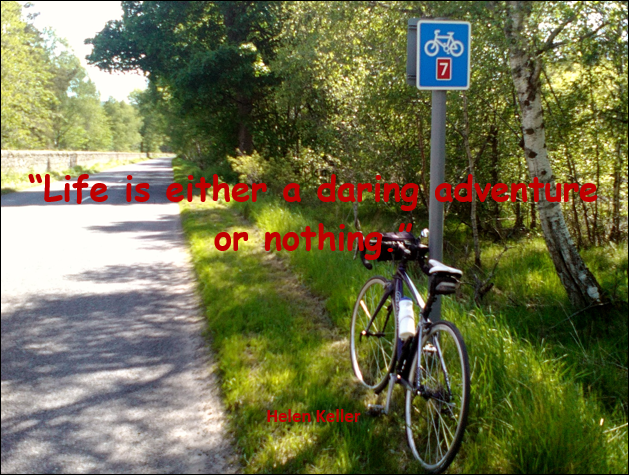