ll funds raised during my ride across Australia went to either the Australian or New Zealand Heart Foundation depending on the donor’s wish.
It was a thrill to be named Best Individual Fund-raiser for 2011 by the Queensland Branch of the Australian Heart Foundation.
​Special thanks to EVERYONE who supported my ride.
REST DAY
Day 16 - 15th April 2011
CEDUNA (South Australia)

Finally a rest day - I needed it and I enjoyed it!!

Ceduna is a fascinating small town to look around. All the people in the camping ground seem to be here to go fishing for King George Whiting! Our "neighbour" spends 6 weeks here each year, and catches his legal "bagfull" each day. Pat was the lucky recipient of some very fresh fillets much to her delight!!

I decided I needed a cover for my bike at night time, so paid a visit to the Church of England opportunity shop. They were fascinated with my Giant bike ride - and allowed me to select anything from the shop for my bike - for free!! How nice was that!!! My bike now has a fitted single bed sheet as its cover - as every good bike should!!!!

Pat manged a "roll up" at Ceduna Bowling Club, and was much more on target on the bowling green compared to the golf course!! I think she has happily put the golf clubs away and "retired" from golf now, although I reckon she did pretty well!!

There is a large new IGA store in the town so a much larger grocery selection to choose from and we were able to stock up our "pataka". Not that we were running too low on anything - the big shop Pat did in Perth is doing us really well. We had used all the meat from our freezer though, so it was an opportune time to re-stock that for future meals. We will still have days between large towns - but we will not have such big gaps as we have had getting this far.

We were also able to replenish the wine supply, which hadn't quite made it this far. It was lovely to browse through a well-stocked bottle-shop in the town.

The town looked very picturesque with large trees down the main street, a tidy shopping area and a recently refurbished waterfront.

A picnic lunch was had overlooking the port. There was a boat in so there was a lot of activity getting it loaded with wheat. The locals say they have had a bumper crop and there appears to be huge stockpiles ready to be moved out. It is a prosperous little port, with much grain, gypsum and mineral sands being shipped out all the time.

I had a wander around the Ceduna Racecourse (which happened to be opposite the caravan park) - 3 meetings a year are held here - it's all over until February 2012!!
At that age, it's one of the worst things in the world - to wake up and not see your bike where you left it.
50 Cent
The hip-hop star on the theft of his childhood bike. 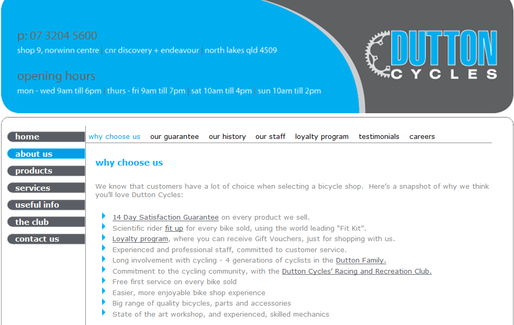