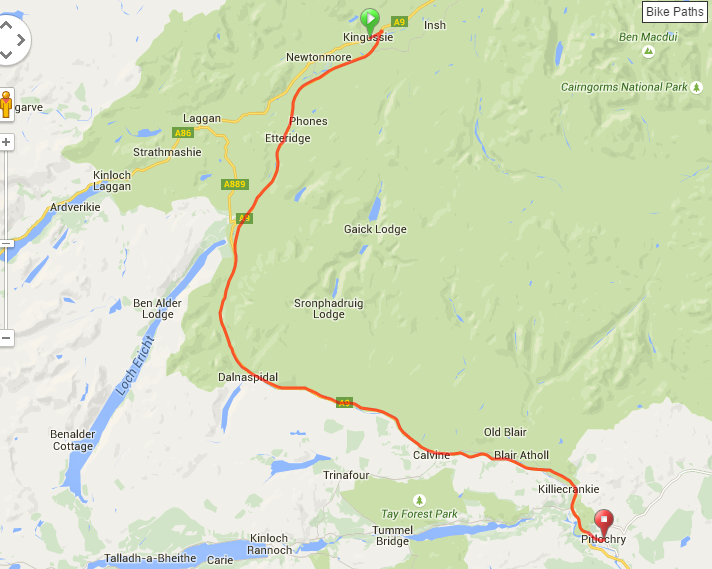 Check out today's supporter - airbnb. I became aware of airbnb through a cycling friend, and what a revelation they have been. We have enjoyed many great stays through airbnb and will continue to do so!!

Another day of climbing in the Scottish Highlands. For the second day in a row – completing the first 35 kms of the day seemed to be the challenge as we would rise to over 460 metres – the highest point of the entire trip. It was a crisp 4 degrees in the morning but the anticipated high of 21 with no rain was considered a beautiful summer day in this area. The wind was a southerly which didn’t thrill me but it was predicted to be light all morning and gaining momentum in the afternoon.

Bernie at the Guest House gave me directions to get on the bike path just south of Kingussie and said I’d be able to follow this pretty much all the way to Pitlochry. This was great news – but – I don’t think he really knows how good (bad) I am at finding the signs. Anyway – I was going to give it my best shot.

I am pleased to say I think I did very well following these paths, and they were most enjoyable. I also didn’t feel too “cut off” from my support vehicle (should I have needed it) as I was alongside or in hearing distance of the A9 for most of the way. While my pictures show the beautiful areas of the bike paths, there were some sections that were quite muddy and I began to think may become unsuitable for my road-bike – but I did manage to get through.

Throughout the ride so far I had seen signs to various “distilleries” – but this ride had me passing right by some major ones! At this stage I am starting to think there are more distilleries than castles in Scotland.

First stop was at Dalwhinnie – a very large distillery nestled in a beautiful spot. My bike route took me right past the door – much too early for sampling. The “crew” were able to see the set-up from the A9 even though they were on the other side of the River Truim. This is one of the highest distilleries in Scotland – and Dalwhinnie the town is known as one of the coldest villages in the UK having an average annual temperature of 6.6C!!! Brrrrrrr – it must look stunning in winter surrounded by snow!!

As well as the climbing, I started battling head winds until I reached Dalnaspidal where the road took an easterly turn and the wind became more of a tail one!!!! Yippee!!!! The bike track also came to an abrupt end. To my right was a gate and a path and I could see hikers way down in the river valley. I wondered if I should be going that way – but as I was unable to get the gate open – I decided to re-join the A9 dual carriage-way. I think this section of road has been re-aligned recently as it was in “as new” condition and light traffic made it an enjoyable stretch to ride. About 5 kms along this, I spotted signs indicating the bike path, but as I had been in contact with Pat, I continued on the road about another 5 kms until I met up with her. I was on the downhill section by now and it was effortless and thoroughly enjoyable zooming along with a tail wind between 45 and 50 kph!!! Stunning highland scenery was a great bonus.

Pat and Pauline had spotted the cycle track from where they had stopped, so after refreshments, I scaled down a bank with Finn, over a fence, through a paddock and rejoined the bike path and B roads through to Pitlochry.

This section of the ride was another wonderful stretch! Once most of the downhill was completed the bike track  and “B” roads meandered through beautiful farmland – passed the spectacular Blair Castle, more distilleries, lovely stone-wall lined roads, lush green pastures and also a couple of gorgeous looking “Highland Cows” positioned close enough to the road for me to take pictures of. I recalled the words of the farmer we met at the B&B in Tain – his words were that the only use for Highland Cows were to be models for tourists to take pictures of. As beef cattle they are apparently very slow to mature and a farmer would never get rich by farming them! Well the couple I saw kept me entertained!

A fantastic morning of cycling and we were in Pitlochry by lunchtime. What a beautiful bustling town!! Pauline and Pat had found a nice B&B run by Murray and Debbie. Murray had a handsome black labrador "Errol" (I think that was his name – with the Scottish accent, it may have been “Earl”) who was his guide dog. Murray has been totally blind since his mid 20’s (now 40), yet he carried our bags up the stairs and showed us to our rooms with ease! Interestingly he had ridden twice (on a tandem) from Christchurch to Queenstown raising funds for Guide Dogs in New Zealand. So we had a dog-fix today and lots of chats about Guide Dogs etc etc!!

Pauline also had her doggie fix as we wandered through a nearby park and she talked to a gold/brown version of her dog Noodles. We all agreed a "Spoodle" as we know this “breed” - is a much better name than a "CockerPoo" as "Daisy" was known.

We had begun to find it quite common that B & B’s allow you in from 4:00 pm (in this respect hotels are a bit better) – so we had time to kill. We found a lovely eatery in the town and enjoyed beautiful food. We then took a walk (well by now Pauline was able to have a short hobble) around the town. Surrounded by mountains, this is a popular holiday area, particularly for those who enjoy hill-walking. We were just before the rush in June, but I can imagine the place will be crowded in July and August.

Only a short walk from the main street is a large hydro-electric power station on the River Tummel. A particular feature is the “salmon ladder” which allows the salmon to move upstream safely – avoiding the turbines!! Many keen anglers were positioned downstream from the dam hoping to snare dinner!!

Today, not only have I continued to wear bike shorts, but it is the first time I have abandoned my hi-viz jacket and been able to comfortably wear my hi-viz vest – and – I even think my arms got a wee bit of Scottish sunburn!!!

Today I was supposed to reach the highest point of the entire ride. I suspect the sign must have been on the road as I didn't see anything signalling that fact on the bike track. I am now out of the Highlands area of Scotland and have moved into the Perth / Kinross area – I suspect traffic is going to get heavier from now on.