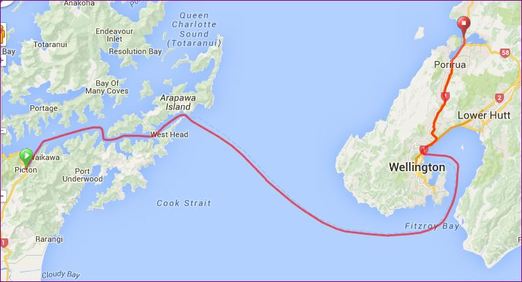 Ferry journey from Picton to Wellington.

I hope this is a fine calm day as cruising through the famed Marlborough Sounds is beautiful!

I have booked for the 10:30 am crossing which will get us to Wellington around 2:00 pm giving time for a short look around central Wellington.

The ride today will be 27 kms from the ferry to the Wellington suburb of Mana. This will enable us to clear the city on a Sunday afternoon when hopefully the traffic won't be too bad. It also puts us in a good position for the next days ride when we should be riding against the flow of most traffic as we head north through the Kapiti Coast region of Wellington.
REVIEW:-

We had an extra bottle of Toi Toi Sauvignon Blanc last night as we reflected on the last 10 days - and - amaze ourselves that we have actually biked from Bluff the length of the South Island to Picton. What a wonderful experience it has been!! Npt easy by any means, and yet we are now heading for the hillier North Island!

This morning we had the luxury of leaving for the ferry at 9:00 am. As we had the one booking form we followed the Jucy to the check-in gate - where "us cyclists" were directed to a little "cupboard" to wait for boarding. We sat there happy to be inside as it was raining lightly. We watched and waved as Jucy went to the upper deck, above us. We had to wait for all the rail freight to be loaded - and then finally - we were told to board with our bikes. We had to "secure" them in bike racks and proceed upstairs. We were last on, and the ship door was shutting as we racked the bikes and by the time we got upstairs the ship had pushed off. The sailing was very smooth - and there was only the occasional shower.

The InterIslander announced the "special" cycling passengers on board and explained that we were collecting funds for the NZGCF. The whip around proved to be fruitful and ensured that we met one of my goals - to raise $5000 during our trip through the South Island!!!!!!! Time passed quickly and it didn't seem long at all before we rounded the heads at Wellington and berthed.

Being last on - we were first off!! Wheeling our bikes across the ramp - we saw wild waving - and Pat's sister, Melva and her husband Vic had travelled in from Lower Hutt to greet us. After pics we continued along the ramp and you could have knocked my socks off when my sister and her fellow partner in crime Whangarei Zontian, Irene McPherson - peeped around a corner!! What a shock - they had flown down from Whangarei to surprise us - which they certainly did - how good was that!!

What a welcome to the North Island! After chatting and getting dressed into our cycling gear - we headed off on the 28 km ride to Mana. This included the steep section up the Ngauranga Gorge until we had to exit at Johnsonville prior to the motorway. A very short way up the hill and a police siren sounded - oh dear - Jucy Lucy was pulled over. The police officer asked what she was doing, and following an explanation he advised that he did not want the van travelling slowly behind us on this busy section of the road. Pat drove on ahead and we eventually got up the hill, exited at the Johnsonville off-ramp as the motorway begins there, and met up again with Pat and her sister Melva, who was navigating us through to Mana.

From this point to Mana it was a very pleasant road through some very quiet areas. I was very pleasantly surprised with this ride - even though I lived in Wellington for a short period of time, I don't think I had ever been through that area. I looked for "Lynn" in Tawa but didn't see her - we stopped at Porirua shopping centre briefly, and amazingly we were at Mana - quite a bit quicker and a lot more easily than I had expected. We rode past the motel to the Sandbar Hotel - and were met there by a local Councillor and several members of Zonta Mana, my sister and Irene, another of Pat's sisters - Dawn along with her husband Wally and their daughter Julie and grand-daughter who had travelled down  from Palmerston North. To complete the "sister act" - Margie's sister Kay also turned up!!

A very welcome "drink" was had - and then a quick whip around at the pub ensured our North Island fund-raising kicked off in good style. After much chatter in the warm surrounds we headed for the motel and a quick shower and tidy up prior to heading to the beautiful Paremata home of Maureen and John to attend a delicious "pot luck" dinner. I think I keep repeating myself in saying these Zontians are wonderful ladies - and the hospitality and support they have shown us has been unbelievable.

But we had to remain focussed on the task ahead - tomorrow is another 90+ kilometre ride - all to soon, we had to head home to bed.

What a day!!!  Not exactly a "rest" day as there had been so much excitement - but a thoroughly enjoyable day which will be remembered with great fondness for a long loooooong time. 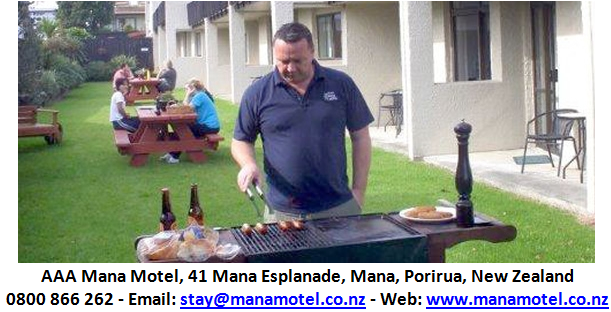 This looks a good place to stay - men do the BBQ while the women sit and talk! Perfect!