My supporter for today who has very generously donated to The Fred Hollows Foundation is the
Old English Inns chain.
​They have over 100 hotels throughout the UK 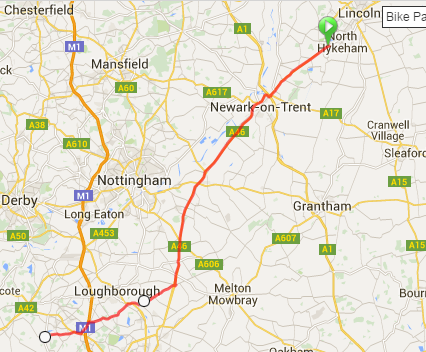 A banana and coffee made do for breakfast this morning – with the promise to get coffee 65 kms down the road at Six Hills – where I was to turn off the A46. The first part of today's ride would be pretty flat for the first 40 kms, then become a bit undulating for another 25 kms at which stage we could prop up the energy levels with coffee and food.

Again I was riding through cropping land in the main and the road was wide and open. This is the first day when the wind has really affected me and it was a head wind all the way making for pretty tough going even on the flat. I kept thinking how wonderful it would be to be biking from Ibstock to Lincoln today!!

When I first headed off there was quite a good bike path alongside the A46 which was a dual-carriage way now. Frustratingly the bike path seemed to stop and start and as there was a bit of a shoulder on the A46 I opted to go on that. About 30 kms in to the trip I met the crew at a roadside P area and had an energy bar and a couple of biscuits. The A46 was very quiet this Sunday morning – which incidentally was also Father’s Day in England. There was obviously a “show” on somewhere close as quite a few horse floats and horse trucks had gone by – with one even broken down in one of the "P" areas.

There was nothing I could do about the wind except keep the pedals turning and push on!! I was to meet up with Pat and Pauline again at Six Hills. The closer I got the more keen for coffee I became – so my disappointment was huge when the one and only likely place was closed!! Rural UK doesn’t do coffees early on Sunday’s that is for sure – well – not the areas I was in that is for sure!!

Next place to try – “Barrow-on-Soar” – and by now the hills were starting. This added the headwinds and my legs were getting very tired! A circle around this town – and guess what – no coffee shops open!! The hotel was due to open at 12 noon – but that was an hour away. A lady said there was an Open Garden scheme and if I paid 5 pound and went into a garden I would get a cup of tea!

Next town was Quorn – up and down a few more hills – so push on I did. There was confusing signs as to how to get into the Town Centre here and I didn’t manage to meet up with the car. I did however see the road we would need to take to Ibstock so didn’t want to bike too far backwards as I was feeling – to be honest – absolutely stuffed.

I saw a small grocery “Co-operative” shop that was open so stopped there. I rang the car and explained where I was and that I needed to get some energy from somewhere and felt there must be something in this shop to eat and drink. They joined me shortly, and while Pauline looked after Finn we went inside. Not a great selection at all!! No hot drinks or hot food. For the first time in my life I bought a can of “energy drink” – Monster as well as some cold apple pie!!

It was beautifully sunny and sheltered alongside the shop so I sat on the pavement on the street and ate and drank. After 30 mins or so – I felt “revived”. While asking a gentleman for directions to Ibstock another guy butted in declaring himself a cyclist and warning me of the steep hills between Quorn and Ibstock. I found this guy rather amusing – he told me he had taken up cycling to get fit and healthy as he had diabetes. Yet, all through the conversation – he was puffing away on a cigarette!! He also said – I can bike from here to Ibstock in 40 mins – which I guess locked in my brain as a bit of a challenge …………

He was right about the hills - they were quite steep - but they seemed to level off / climb, level off/  climb, level off / climb so you sort of got breathers along the steadily increasing height. It wasn’t easy, but I felt determine and was delighted not to walk at all. I think I had three things going for me – I must be getting fitter, perhaps Monster does give energy, and the “challenge” I picked up from the smoking rider made me very determined

His directions were good though and I trundled on through “Copt Oak”, down and across the M1 and A50, eventually arriving in Ibstock.

This town was put on my list of “stops” as my sister had been to an equestrian school as both a working pupil and instructor here in the 1980’s. As it happened – one of the girls she met at Heather Hall way back then was going to meet up with us in Ibstock and take us to the now no longer equestrian school. I thought we would have dinner together, but when we made contact and discovered none of us had really had lunch (it was about 2:00 pm) we decided to check into our accommodation and then all go to lunch.

I had sent emails to the Ibstock Posthouse B & B seeking accommodation but had not heard back from them – so it was a bit of a worry if we did in fact have a couple of rooms or not. I thought if not there was bound to be a pub we could stay at. Pat went to the Posthouse B&B where the lovely lady said she’s been too busy and hadn’t cleared her emails – but that she did have 2 rooms. What a relief!! This was a great B & B above the existing Post Office.

We got in contact with Carol who drove to the Post Office and we followed her to somewhere nice to eat. Now Carol – sorry to have to write this – but don’t take offence please!!! What happened actually gave me a huge boost of confidence in my navigational skills which I had found to be lacking at times so far!!!! Carol set her Navman for the pub I had passed coming into Ibstock at Copt Oak. I think it was about 3 miles away. After following the Navman – 8 miles later we arrived at the pub!!!!

The specialty here is roast chicken on a Sunday – and it was unbelievable!!!! It’s not often that Pat or I are “beaten” by a meal – but this one did. It was beautiful – and I think certainly the right choice from the menu at that place. Sadly Pauline’s salmon meal didn’t quite make it as a memorable meal - or yes, memorable - but not for the right reasons!!

From here we followed Carol back to Ibstock and to Heather Hall which is now rather derelict. The good news is that it has been recently purchased (for 780,000 pounds) and is going to be restored as it is a listed property to its original grandeur. Carol rather cheekily headed up to an adjoining property to discover that the owner was farming the land until the new owners arrived. He took us on a fabulous tour of Heather Hall and explained that he thinks it will take 1 million pounds to restore the place!! He was very interested in the history of the place and Carol was in her element describing how it was in the ‘80’s. It was a fabulous afternoon – thank you very much Carol.

I am sure my sister will enjoy the pics from this visit!! It was certainly a mixed day from being battered by head-winds all morning, to a wonderfully social afternoon. 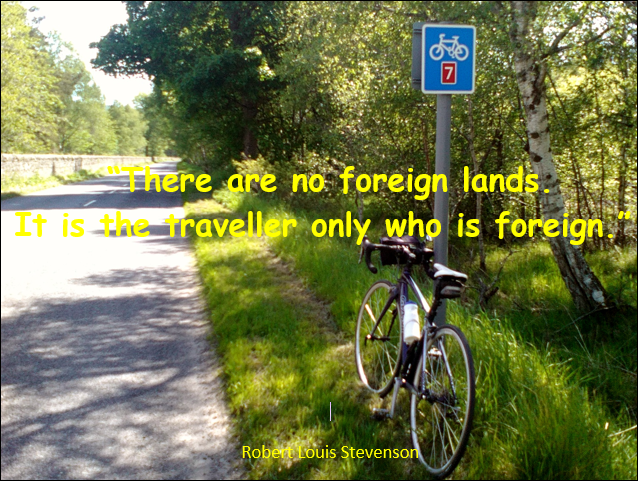