Interesting New Zealand facts:
New Zealand's national symbol: is the flightless and fast disappearing Kiwi that lends
it's name to the people of our nation. Also the Silver Fern - more associated with our national sports teams. 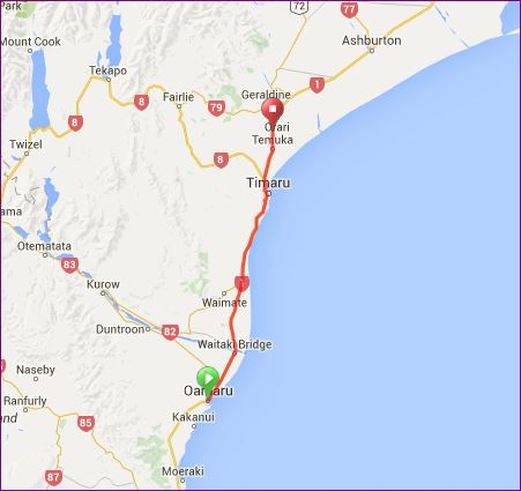 PREVIEW:-
At first glimpse this looks a pretty scary elevation profile – but the highest point we will reach today is only 50 metres above sea level. So generally – I am pretty sure this day can be described as “undulating”. We’ll leave the province of Otago today as we cross into Canterbury when we go over the spectacular Waitaki River.

Small towns we will go through today include Waitaki, might detour into Waimate depending on how we are feeling. I also notice there is a place called Scarborough - 25 kms north of Makihikihi! Now having biked from Scarborough (WA) to Scarborough (Qld) – I think I’ll have to call in here!! I can see the place on Google Maps – but I can’t get anything to come up on Wikipedia – so this could be a surprise!!

5 kms north of Scarborough we will reach Timaru - population 27,000, and a major port in the southern Canterbury region servicing the prosperous agricultural hinterland

We’ll roll along a further 19 kms north of Timaru we will pass through lovely little town of Temuka – population 4000, and a further 7 kms towards Christchurch we arrive at the destination for this night - Winchester.
REVIEW:-

A fair dinkum kiwi frost this morning in Oamaru - the ground was crunchy white and all vehicles at the Oamaru Top10 Holiday Park had an icy coating and despite this - there was an Aussie bloke wandering around in bare feet!!! It wasn't too long before Don was heading to find warm footwear!!

Margie had to start earlier today as she had to cover those kms we had done the evening before - but at 7:55 am - into camp she cycled - and we all set off at 8:00 am. Cold weather, "bracing" I guess - OK if you are moving - not OK when you stop! First stop was crossing the border - out of Otago and into Canterbury - over the rapidly flowing Waitaki River. These South Island rapidly flowing, clean water rivers are stunning.

Another "photo-stop" at 45 degrees south - and stunning views of the Alps covered in snow appeared to our left. Barely had we stopped for one lot of photo's than the view got better - more photo's - and so it went on - better and better shots the whole way!

Reached the Waimate by-pass road and we must have thought we were not doing enough kms so we opted to go into Waimate and add an extra 8 kms onto our ride. A late morning tea was taken in Waimate before we kicked on for Timaru. We anticipated a two and a half hour journey and texted through to the Zonta women we were to meet early afternoon. Unfortunately the wind increased and became more of a side / head wind and progress slowed.

Through Timaru and there were the friendly Zontians - Alison, Ann and Margaret beckoning us in. What a wonderful spread they turned on, coupled with beautiful harbour views - we dined like kings, and enjoyed conversation on many different topics - but time moved on, and we had to leave and continue on our journey.

Next stop was the Phar Lap Raceway at Washdyke - an "educational stop" for our Aussie party members as we showed them where the great Phar Lap was born and bred! What a wonderful monument to such a great horse! I understand the roadway next to the racetrack has farms all using names with "Phar" in them ........... the mind boggles - some of them sound great - but it was a detour we didn't make on our bikes!!

As we headed towards Winchester - a car pulled up beside the Jucy Van - the McBride's (2 people and 2 golden labbies) - owners of the Pinewood Motel - where we were heading for that night. They had been following our "Spot" beacon and wondered why we had stopped just north of Timaru!! We thought that was great!! How caring!! They also gave the advice to take the by-pass through Temuka as the town was in shut down due to a TAB attempted robbery!!!!

When we reached Winchester and the Pinewood Motel - what a welcome from Team McBride! Two wonderful motel units capturing the late afternoon sun beautifully were at our disposal. As if that wasn't more than enough - in the fridge was a Shepherd's Pie large enough to feed an army of hungry cyclists - and home baking as well. It didn't end there - Don and Annie were taken on a tour of the district to see where the first person to fly came from. They also insisted that we partake of the stocked "bar fridge"!!!!

What can I say about today - a great ride - and the most fantastic kiwi hospitality. Words just do not describe how humble I felt at such support!!