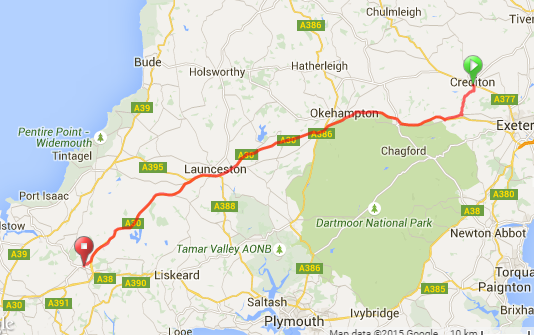 Have been thinking of my mum and dad a lot through this trip - I know mum would have loved having her atlas out following every pedal turn of the way. She thoroughly enjoyed the times she travelled and toured in the UK so it would have brought back a lot of memories to her. Thanks for giving me the strength to take on such adventures!!!!

I had been warned – "wait until you are in Cornwall – there are plenty of hills" – and today's elevation profile doesn’t look good!! Crediton is actually in Devon, but by the time I get to Bodmin – I will be in Cornwall.

I didn’t  go for a stroll around Crediton last night as I was feeling a bit weary after the late in the day hills getting here, but as I rode out of the town I realised Crediton was a lot bigger than I gave it credit for! I should have realised there was more to the town than where we were staying as Pat had gone for a little wander last night and had come across a Tesco Superstore.

These “super-stores” really are “one-stop” shops. Typically we would have a supermarket and several small shops (chemist, news-agency, bottle-shop  etc) in a block – but these superstores sell it all. Almost like a combination of Coles, Kmart, Dick Smith, Priceline, Dan Murphy’s all in one huge shop. They are usually on the edge of towns, and must have had a massive impact on the “main street” of these small towns when they were built. As I rode out on the A377 to Copplestone I noticed a large Dairy factory that must have been a big employer here - and, that the circus was in town.

It was definitely an undulating ride through to Copplestone, a sleepy little town where I turned left onto the A3072. More of this beautiful green productive countryside. Animals must still be housed in the large sheds I see, as the fields all seem to be providing cut grass – hay / silage etc. I thought I would have seen big dairy herds that must be supplying the large Dairy factory in Crediton I saw. There were a lot of potato fields being harvested as well as extensive strawberry gardens. The strawberries seem to be grown covered by low poly-tunnels that must be removed to enable harvest to take place. The strawberries we have been buying to eat, grown in this area, are beautifully sweet and evenly red all over – none of those white bits around the tops like we get in Australia.

The only traffic I saw on this stretch of road, apart from Pat overtaking me and heading to our agreed meetup place Okehampton, were large farm tractors towing LARGE trailers, and, about every 20 mins a double-decker bus heading to Exeter. Luckily the road was wide enough and passing was not a problem. I soon turned onto a smaller road – the B3215 – which at various stages was alongside a railway line and a couple of trains seemed to be scurrying along – in my mind heading to London – but I am not too sure about that!! Maybe Exeter?

There was a big winding downhill drop into Okehampton. I was beginning to dislike downhills, as, naturally, they are followed by an uphill – and it wasn’t getting any easier!!

I had started the day in nice fine weather with just my hi-viz vest on – but had called Pat for my jacket at Copplestone as showers started. The wet roads added to my downhill fears as the roads were very slippery. The showers became more frequent after I joined the A30 just after Okehampton so Pat stopped at the next café and we decided to have coffee and see if the rain would pass as predicted. Great news – it did – while we enjoyed a hot coffee!!

After a climb to the equal highest point of the day not too far south-west of Okehampton I was able to enjoy a period of downhill and flat until the town of Launceston. This was off the A30 a bit and I decided to continue on past it as I knew there was still more climbing ahead.

The wind had kicked in, and was a head one – just to add to the fun! I hadn’t long left from a rendezvous with Pat than police cars and ambulances flew past me. A little further on and they had closed off the left lane and were signalling for traffic to form one lane near the centre of the road. They stopped me - congratulated me on my bright jacket and advised me to go through the inside of the cones they had put out before I rejoined the road – and, to take care. They were so nice! When I got up to where all the action was - a ute and caravan were wrecked in the bush on the side of the road. Two people were being attended to by the ambulance officers. It appears it jack-knifed and went out of control - flying off the road!! Poor folk - car and van ruined and naturally they looked extremely shaken. There didn't appear to be any other vehicle involved. I thanked my lucky stars I hadn't been riding along that section of road when that occurred!! It did make me feel slightly uneasy every time a car and caravan went past tho!

More relentless hills followed and going up one of them, two fit young cyclists caught up to me - and overtook me - lol - I wasn't going very fast by this stage!!! For one small moment I thought I may have been able to pick up a wheel - but no – what a dreamer I was!! We only managed a few words as the traffic was busy at that point (just after a short section of roadworks). They too were riding John O Groats to Land's End and would be finishing tomorrow. (I won't finish until Sunday). It was great to wish each other well!!! I am in striking distance now and thoughts had been going through my head as I rode wondering if I should ride the rest of the way in one day. But I still had hills to climb today, and if the wind continued as it was or even worsened tomorrow it would be very tough. I decided to resist temptation and split the remaining kms in half to enable me to savour the last 100 and a bit kms and end on Sunday as originally planned. It was a strange feeling - wanting to make my destination - but not wanting the journey to end!!

More roadworks when I was near the “Jamaica Inn” – made famous by Daphne du Maurier’s novel (and film) of that name as I rode through the Bodmin Moors. Two busy lanes of traffic had to merge into one lane - I was able to merrily continued up the inside - passing many cars that had flown past me earlier. Half way through the roadworks instead of the centre lane being closed, the left hand lane became closed. I hadn't seen a single workman anywhere along the miles of works - so in the interests of my safety, I buzzed along on brand new seal feeling very safe on the "wrong side" of the cones. A brand new lane completely to myself!!

As the works ended - the downhill started and it wasn't too long before I was at my destination for the day Bodmin - very weary - but pleased to have made it!!

I phoned Pat when I got to Bodmin, from outside the “Shire Hall”. She had already checked into the Westberry Hotel, so gave me directions on how to get there. We were in a separate block of 4 large units (2 up and 2 down) at the back of the hotel. It was a super room and today in particular, the hot shower at the end of the ride was such a good feeling!! Today and yesterday had been 90 and 100 kms of hills and head-winds. I was pleased to have picked up that extra 40 kms earlier in the ride which had allowed me to shorten these two days to this from my original plan. The 120 per day my original plan had through this area would have certainly made it a tough ride and taken the fun out of the days!!

Despite tired legs - we had a bit of a wander around Bodmin - not exactly a buzzing place for a Friday night – but plenty of interesting old buildings, narrow lane ways, quaint shops etc. We dined at a pub and I was most disappointed that they had run out of home-made Cornish pasties - oh well - tomorrow!!