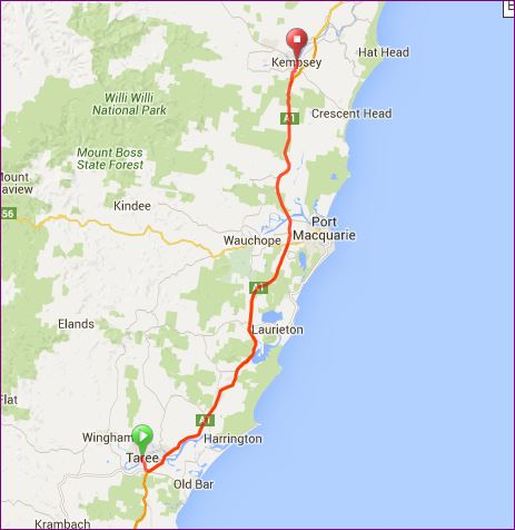 This is the day that Don has been fearing the most! We have about 120 kms to go, so distance wise this is the longest day of the journey. We haven’t found the previous couple of shorter days too easy – the climbs are quite insidious - not of the short and steep type, but more the long slow drag type. They certainly make my legs feel tired. There are some good things though - we have had wonderful wide road shoulders of an excellent smooth surface – predominantly concrete. And the down hills are also of the long type so in this case – I do feel we get “bang for our buck” if only the wind is not in our face we can sit and not pedal for some time which is extremely enjoyable!! If the wind is in our face – it is extremely disappointing to have to pedal when going down hill – sadly that has happened!!

Matt at the Blackboy Tree Motel had supplied us with a great room – and Don had been able to catch up on some “man chat” with many workers who were also at the motel. They were working on the NBN network and seemed to work 3 weeks on and 3 days off which seems pretty tough to me!!

As we were on the northern side of town it was only a couple of kms before we joined the highway and more of those lovely wide concrete shoulders. As per what had become a normal thing we’d ride for approximately 25 kms before we had our first rest stop. We clicked that off in pretty good time. The predicted southerly had not arrived – but it was basically “windless” so we were neither helped nor hindered by it. Again there were ups and downs, but none of them were too onerous so progress was good.


A walker on our side of the road, heading south, turned out to be a well laden down chap who we had seen when we drove down a week ago. He doesn't seem to have come far - but then he carries a fair load and walks with quite a limp! We said we had seen him - and he remarked we were lucky as he often just rests in the bush on the side of the road. A man of few words, it seems he walks up and down between Queensland and Victoria!!

We pushed on until we got to the Port Macquarie Service Centre where we opted for a longer stop and a food break. Subway always seems to be present at these stops and seems to have become a reasonably regular lunch!! We had really made very good progress this far – but knew only half the job was done for the day – so on we went.

More of the same – great joy – and great progress ………. but then things changed!! The advice we had received in Taree had been spot on up til now, but we think the people must have turned around and gone back to Taree 75% of the way to Kempsey. The shoulder became a lot narrower, and the road surface became much rougher – to us – we started calling it a “New Zealand” road. Immediately the bikes ceased to “roll” along smoothly and we had to push, push, push – much harder on the heavier stony tarseal compared to the concrete surfaces we had enjoyed until now!!

It is obviously a spot earmarked for improvement and we soon came across frequent stretches of roadworks. Getting through stretches of roadworks had me worried before I started this ride - but now I actually enjoy them. The traffic gets slowed right down, and wherever there has been a stop/go person, without fail we get preferential treatment and have our own turn to get through the road-works while ALL traffic is stopped.


We had been checking with our elevation profile map and had begun counting down the hill climbs which seemed to be getting steeper and steeper. A few more van stops for drinks and energy bars, and eventually we re-joined a magnificent surface – but it wasn’t to be for long as it was the new Kempsey by-pass and we had to leave it and head the 7 kms into town to stop the night.

To arrive around 2:00 pm on our longest day was a very good effort – so much so that the cabin wasn’t quite ready for us, so we sat with our legs dangling in the pool to help recovery!!

A trip into the town centre for a quick shop – and again we enjoyed a “home-cooked” meal at the camp that night.

I know I went to bed with a sense of relief that the longest day was over, and that there was a 75 km ride the next day and then we would get to have our three easier days of riding which would hopefully bring some sense of normality back to our bums and legs!! 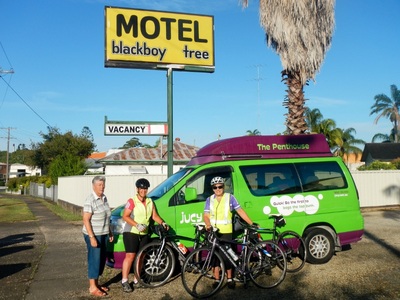 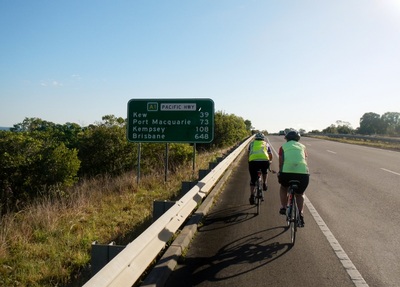 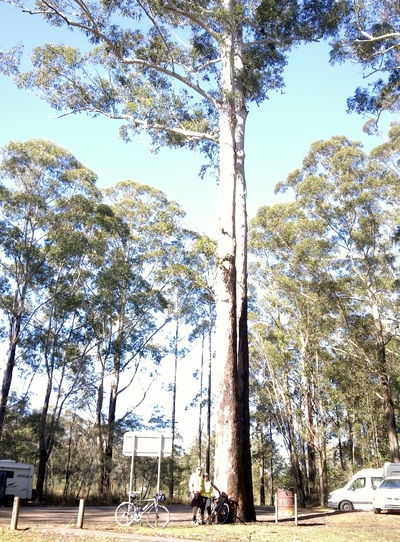 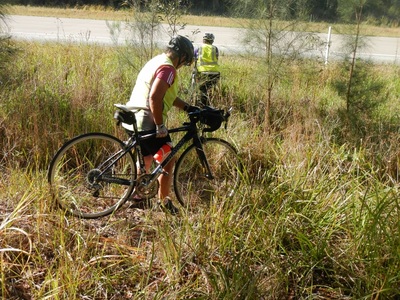 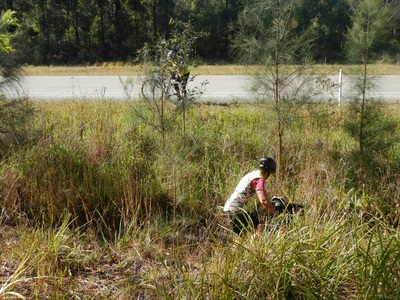 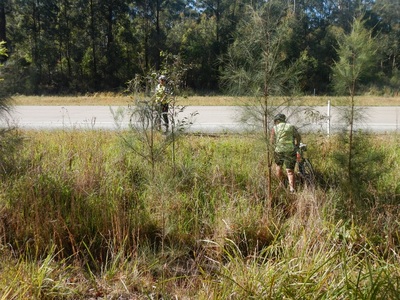 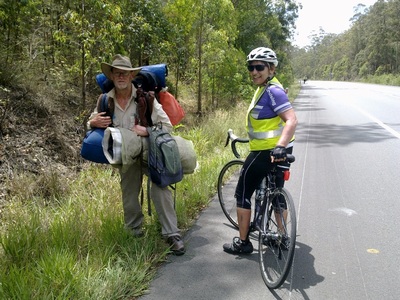 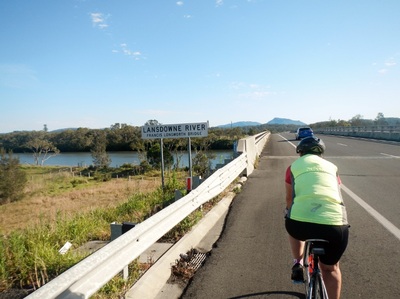 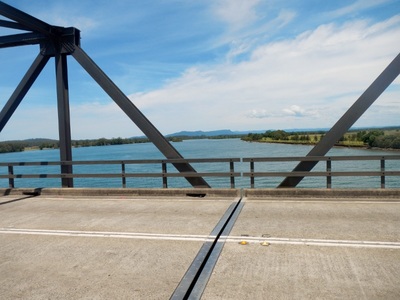 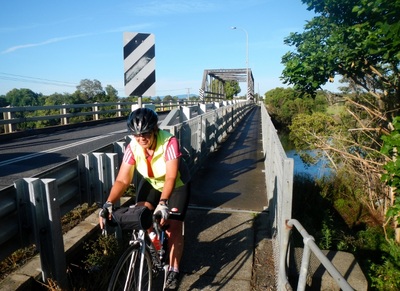 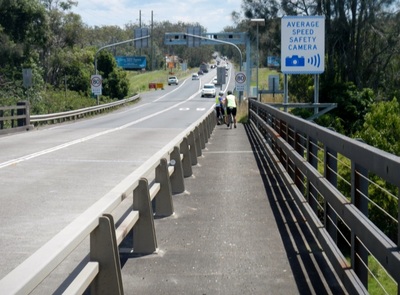 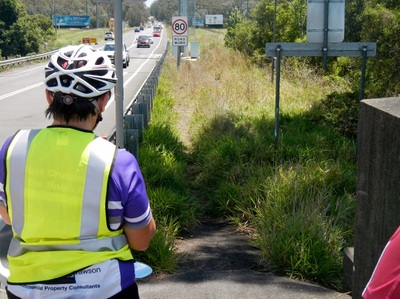 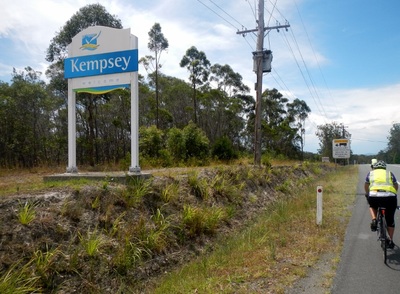 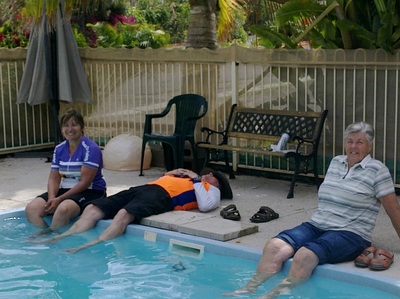 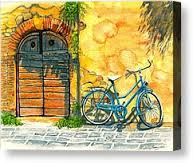 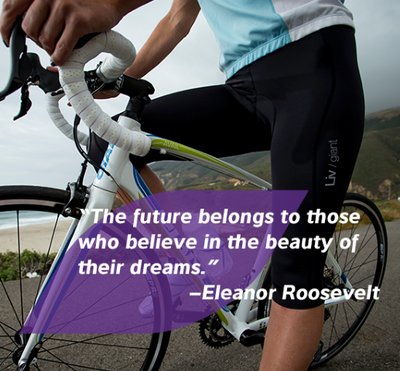