​My supporter for today who has very generously donated to
The Fred Hollows Foundation is:-
Rentalcars.com
​Check them out for great rates - the best!! 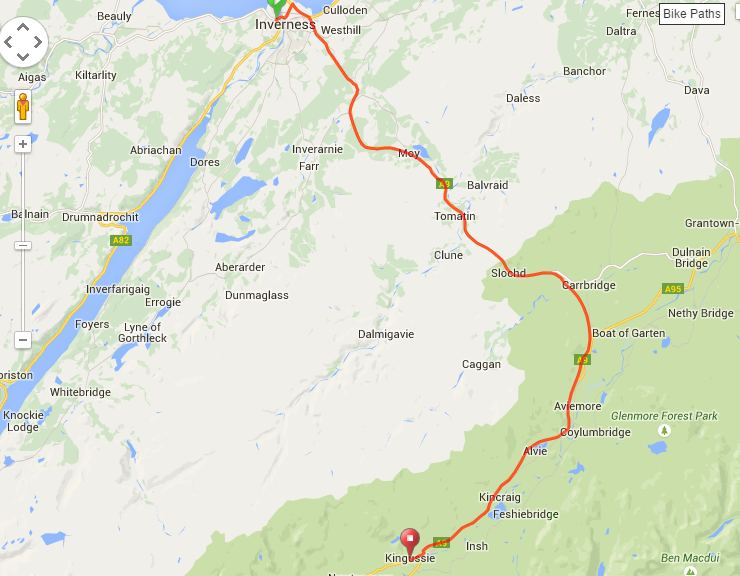 Today's supporter - "rentalcars.com" are a car rental "broker" and as such get the best possible deal from several different companies. From the savings they found for us a donation has been made to The Fred Hollows Foundation.

No matter the disappointment with Pauline’s room (our’s was fine) – once again – we were provided with a breakfast that certainly keeps cyclists going!!!!

Imagine our disappointment (with the Information Centre really) when on continuing our journey we saw signs only about 5 kms along the A9 for B & B’s and Guest Houses!! Not to worry – what happened had happened and couldn’t be changed – move on!!

Today’s elevation chart did have me worried. Pretty much the first 35 kms would be climbing from sea-level to over 400 metres!! Once up to that height – it should be “undulating” for the rest of the day – my mind set was that I couldn’t wait for the “Distance” figure on my speedo-thingy to show 35 kms!

The weather was great. Fine, slightly cloudy, a light westerly wind and rather crisp temperatures – the wind got even "bitier" the more I climbed – although by then the body temperature had certainly warmed up! There was still quite a bit of snow on the tops of peaks all around us. I had even decided to discard my long pants today and wear just bike-shorts. I had thought I would need longs most of the trip - but they were never worn again!!

Again there were quieter roads available for cycling on, but even though the A9 was dual carriageway for a good distance out from Inverness, when it narrowed to single lane in each direction, the traffic was still not heavy and I felt very safe riding this road. I did go on sections of the national cycle route but in parts it was very wet and muddy so I returned to the road. I still can't get over how extremely vigilant and careful of cyclist the drivers are - particularly the huge logging trucks. Thanks a lot drivers!!!

I kept seeing signs saying “Deer” – but as yet hadn’t seen any despite gazing around the hills frequently. Pauline tells me she saw lots when she was on the train travelling to Wick – so they must be here - somewhere. I was beginning to think these signs are a bit like the “Koala” signs in Australia.

My “crew” looked after me well and were at the summit with oranges and energy bars –these were extremely welcome. A bit of a rest and a stretch of the legs and then it was on our way to Aviemore for our next meet up. This was a wonderful section to cycle. Beautiful road, downhills just enough that you could sustain speed for the uphills, super mountain views, sunshine, temperature warming up, no wind – perfect!! I kept wondering where it would be best to stop and get a view of the snow that was still on the hills / mountains. In the end - I realise I didn't end up stopping for a photo at all!! It must be stunning in the winter with snow all around.

I had thought I may not see any more "Lejoggers" until I got down to Gloucester - but I passed an escorted tour group having their roadside break. Most people come up along the side of Loch Ness and join in with the way I have come at Inverness.

Aviemore was a bustling town – although I imagine not as busy as it would be in the winter when it is a major ski area. There are a lot of “walkers” or maybe I should say “hikers” around – I guess they take over from the skiers. Pauline and Pat found a great little coffee shop that had absolutely scrumptious scones. I pulled in there just as 2 heavily laden cyclists from Germany pulled in. Finn realised his life was pretty good!!

After downing coffee and scones I then took the B9152 to Kingussie (which I now know how to pronounce!!). I am still amazed at how considerate traffic is on the main roads - but also enjoyed the quietness of this "B" road. I attempted to follow some cycle paths - but seemed to come across surfaces not really suitable for my road-bike, or unable to see where they connected – so just stuck to the B9152. This was a lovely stretch of ride and arrived at our destination for the night feeling on top of the world after the beautiful farming area I had just ridden through.

As we had had “issues” the last 2 nights finding accommodation I had enquired ahead for Kingussie and we had to check in at the Information Centre there to get directions. In short time we were checked in at the Sonnhalde Guest House owned by Bernie and Janis Jones. They were away for the day and Bernie’s sister checked us in, gave us a lot of cheek and entertained us with her dry Scottish wit. It was so hot and sunny that she moved chairs and a table out to the front so we could sit and sun-bathe!! The name of this Guest House seemed most “un-Scottish” to me but I discovered it was built in the 1800’s by a Swiss Doctor as a rest and recuperation place for his patients.

After some rest and relaxation that afternoon we went to the Duke of Gordon Hotel for a wonderful evening meal in the Scottish Highlands. 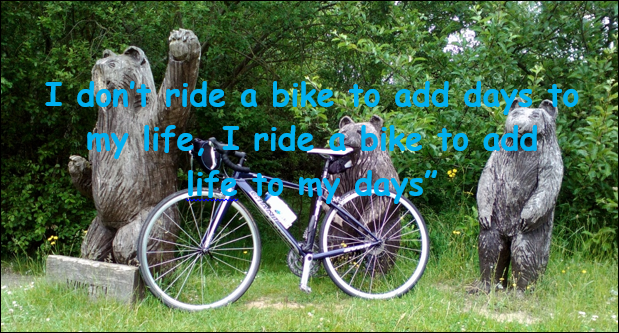