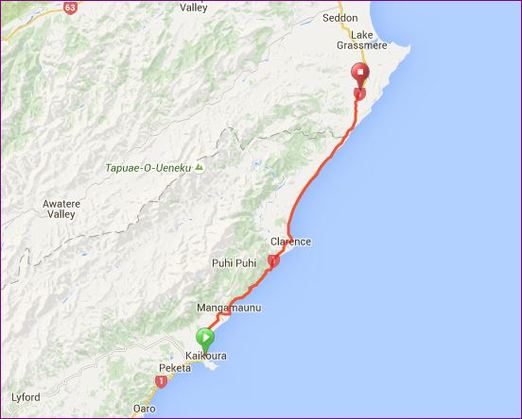 Another day with under 100 kms to bike, but some pretty twisting, turning and hilly ups and downs. We will ride along the coast pretty much all day and enjoy the wonderful sight of a beautiful coastline and see (and smell) seals on the rocks. If we look to our left we will see the northern part of the Southern Alps rising to 2500 metres and looking quite spectacular I would imagine at this time of the year.

Still not too many towns through this stretch and we will move out of the province of Canterbury and into Marlborough by the time we arrive for the night at Ward - where we will meet with some very friendly resident cyclists!
REVIEW:-

When I read about the Blue Seas Motel, I thought their photo might be an exaggeration - but it is almost an understatement compared to the view we have!! I don't know how much I can write about the beauty! - In fact the best thing is for me to urge everyone to visit Kaikoura and see it for themselves! But our schedule says move on - so after loads of photo's - off to Ward we went.

Today we were expecting an easier ride, but as we had heard the wind was expected to pick up during the day, we headed off early. Once we had cleared Hapuku just north of Kaikoura we were on the coastline and what gorgeous views. We lost views of the snow-capped mountains and these were replaced by slightly smaller mountains - well - more like big hills alongside where we rode. At times there were signs of past slips, and fences to catch falling rocks - at times, no fences and quite a few rocks on the road shoulder where we were riding which made me hope nothing would tumble - it might hurt my bike!

In parts there was little road shoulder - even the "rumble" strip which we often use to ride inside of had been moved into the middle of the road!. A couple of times I thought I could "smell" seal colonies - this is the joy of riding a bike - but we stopped when we got to Ohau Point and were entertained for quite some time by the antics of the younger seals.

Further along the road we stopped for energy bars and drinks and rested in the long grass roadside. (Oh a train is just passing through Ward as I write - northbound). We watched Paradise ducks in the field next to the road. There has also been a blooming lot of wild flowers along the roadside - sweet-pea, red flowers, yellow flowers and orange flowers - but what kind - I don't know!!

We pedalled on - very pleasant and sunny and then Pat in the Jucy van overtook us, and stopped ahead. Depending on road conditions the distance she travels behind us varies - trying to keep us protected and at the same time respecting all road users. For a time she had stopped on a small pull off area to let us get ahead. Then a small red hatchback car like a Festiva/Fiesta parked alongside her. She thought as she has her hazard lights flashing it may have been someone stopping to see if she was OK. Pat got out of the van to tell the car all was well - but the tall slim young beanie-wearing man got out and headed for the drivers door of our Jucy that Pat had left open!! He started looking around the cab (fortunately no purses or bags were in the front and then Pat thought he was going to get in and drive off. She pushed him away, and grabbed the keys out of the ignition!! This seemed to agitate the young man and he went back to his car and sped off - a bit scary for Pat - and one does wonder what his real motive was!!

We had made pretty good time and instead of stopping for coffee just over 12 kms from our stop for the night - we decided to press on thinking we had just over 30 mins riding to go. How wrong were we!! The northerly wind became gale force and we were biking straight into it!! And then the hills began - it was very tough going!! But eventually we made it - 7 kms further than we thought for the day - wind much stronger than we thought for the day - and what do we see around all the hills - wind powered thingies everywhere! As the owners of the East Coast Inn informed us - it always blows here - always gale force - just some times a northerly and the other times a southerly.

Anyway - it is happy hour from 5 - 6 at the bar tonight and they have given us permission to collect for the NZGCF - so let's hope we do OK.