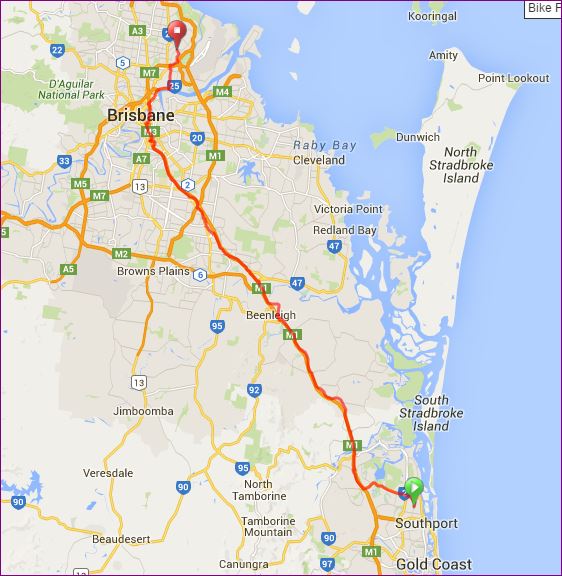 I have to say it again, how thrilled I was last night when biking buddy Steve McCombe volunteered to lead us from Dreamworld to his place at Northgate where we are to stop the night. What a relief to be able to put all energy into the pedaling instead of the navigating and pedaling!!

Steve left his home around 3:30 and by the time we met up he had already clocked up 91 kms!! We were on a slightly different route to Dreamworld – but almost right on 8:00 am – Jucy, Pat, Annie and I met Steve outside a very quiet place. I don’t think it opens until 10:00 am. We had noticed already the motorway heading south was very heavy with cars – everyone was leaving Brisbane – the G20 leaders would have the place to themselves if this traffic was any indication!

We agreed to meet up with Jucy for coffee and nourishment at BP Yatala – so Pat headed in that direction. When we arrived at the service centre I could not believe what a mad house it was – so busy! We were lucky to be on bikes as we could cut through the queues of traffic waiting to get in to the place. Likewise on the way out – we were off and heading north while Pat reported over a 30 min wait in queues of traffic to depart from the Centre. Craziness!!

Steve’s knowledge of the bikeways on the south side of Brisbane is wonderful, as were his directions as to how we would be navigating through very large roundabouts, different stretches of footpath, road and bike path. I had ridden parts of the route on the 5 occasions I have ridden the Brisbane to the Gold Coast ride – but obviously this was in reverse. What I hadn’t ridden though was the section into the city that in the B2GC we cover on the closed dedicated busways. So that was great new territory.

I think it turned into a blessing that we were doing this on the day that had been deemed a public holiday in Brisbane for the G20 summit. Even in the Logan Rd / Kingston Rd area where it was not a holiday – the traffic was very light – it was all on the Motorway - thank goodness!!

The real battle of the day started to be the heat – and it certainly got very hot when climbing the hilly sections! We seemed to be going through our water bottles at an alarming rate – but after a lovely long bike-path descent we arrived at Holland Park and a Shell Service Centre where we were able to replenish our fluid levels and refill our drinks bottles, and consume some energy foods.

No too long after that, Steve punctured - fortunately we were close to a motorway over-bridge so we were able to shelter in the shade while Steve fixed his rear tyre.

Through more parks predominantly on bike paths, and eventually a short steep descent and we were on the bike-path at the Kangaroo Point end of South Bank. It was deserted!! Yup – all those cars on the Motorway had taken everyone away from the city! High security was in evidence, helicopters hovering overhead constantly, and the clip clop clip clop of the mounted police patrolling the parklands.

We stopped for photos on the Story Bridge – I love Brisbane as a city and she looked lovely bathed in sunshine today. I couldn’t help but reflect that only 14 days ago at about the same time of day we had been on the Sydney Harbour bridge looking at that great city and harbour. Not too long after crossing the Story Bridge we noticed the flight paths into Brisbane Airport went absolutely quiet. We then noticed a large jet flying in an east/west direction and we "assumed" this was Air Force 1 bringing President Obama to the G20 summit via the Amberley airbase.. Not too long after this plane passed over, a succession of domestic planes started landing and taking off from the Brisbane Airport.

It had been easy progress around this area on a bike today, dodging only the very occasional walker or biker. Steve took us around the recently opened river walk section and then along Kingsford Smith Drive (on the path) and through all the new developments at Brett’s Wharf. I need to explore there more!!

Back in familiar territory again, and although the temperature had reached the mid 30’s we cruised up to Northgate and finished the days ride just after 2:00pm. Jucy and Pat were there, Pat having spent some time while waiting for us at the nearby Toombul Bowls Club. There was a nice breeze blowing and great shade from trees outside Steve’s place, so we relaxed and watched Steve do what we probably all should do – give his bike a good clean down. My poor Finn just got a pat and told – only one more day to go!!

After showering and changing, and a few txt messages it was super to be joined by another biking buddy Kate Anlezark at the Royal Hotel in Nundah for a yummy dinner. It was flat out there and rather noisy which made it a bit difficult to hear conversations!! Our waitress while efficient – gave us some giggles with her comments at times …….. !!!!

Tuckered out after a long hot day – it was soon time to head back to Steve’s to get some sleep before the last day of the trip tomorrow!! 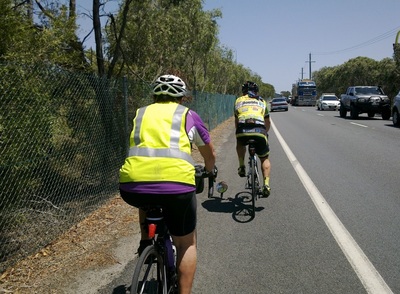 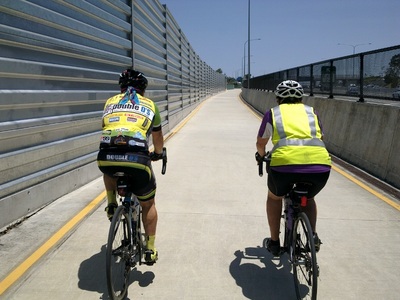 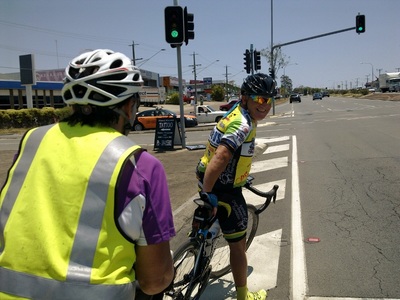 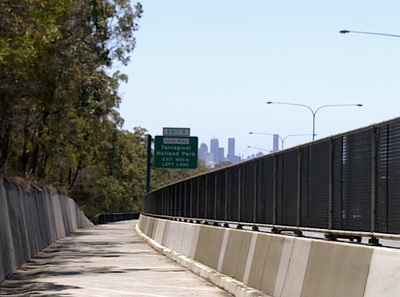 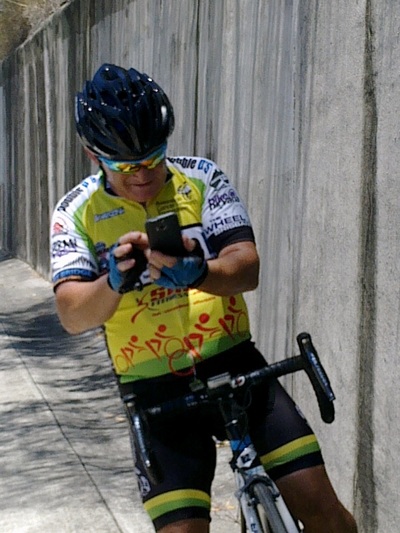 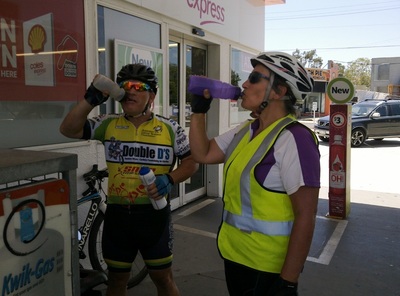 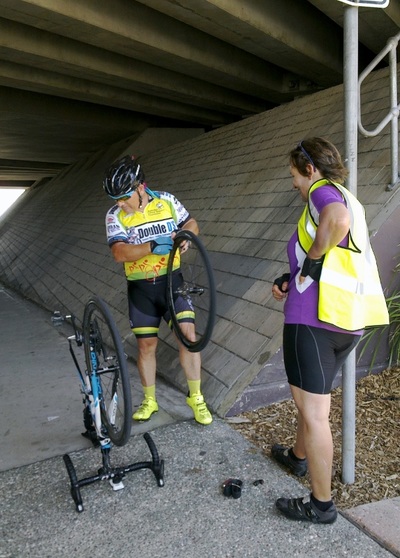 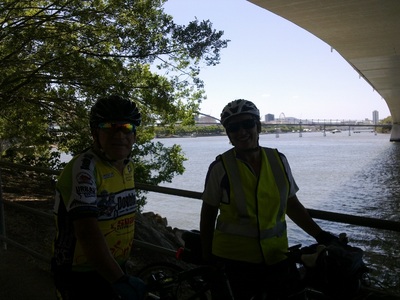 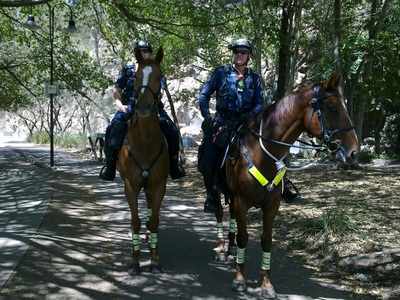 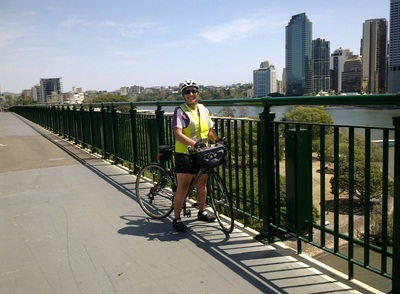 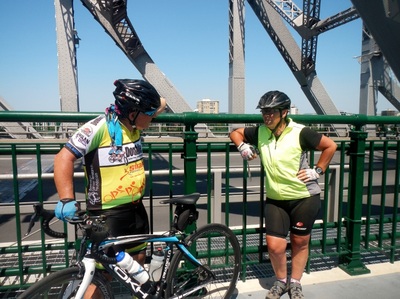 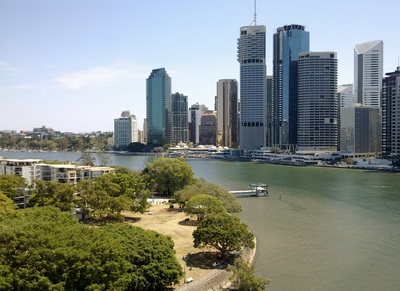 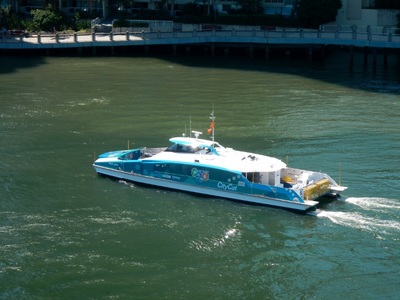 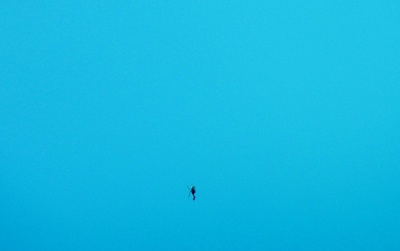 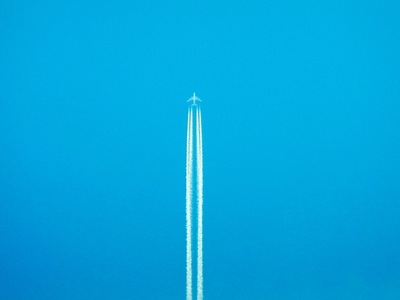 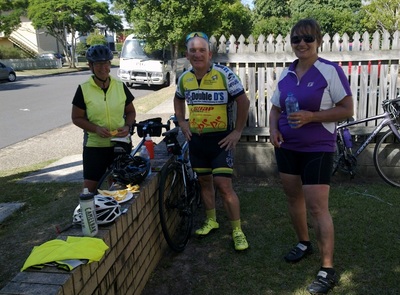 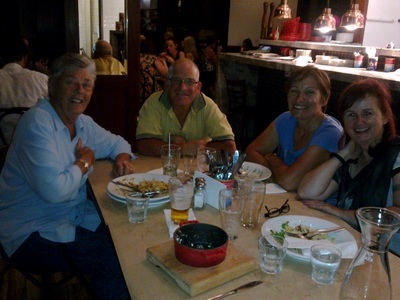 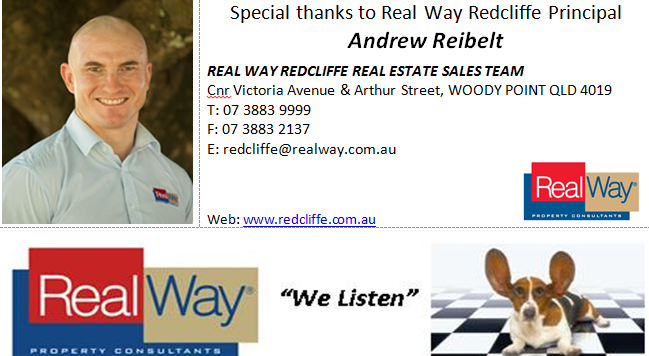 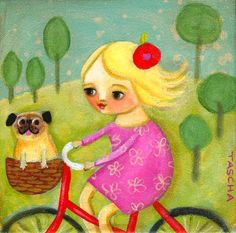 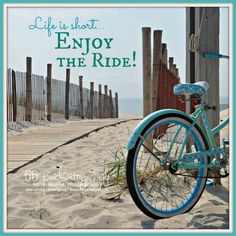