All funds raised during my ride across Australia went to either the Australian or New Zealand Heart Foundation depending on the donor’s wish.
​It was a thrill to be named Best Individual Fund-raiser for 2011 by the Queensland Branch of the Australian Heart Foundation.
​Special thanks to EVERYONE who supported my ride.
Day 6 - April 5th, 2011
Coolgardie (WA) to Norseman (WA)
167.5 kms 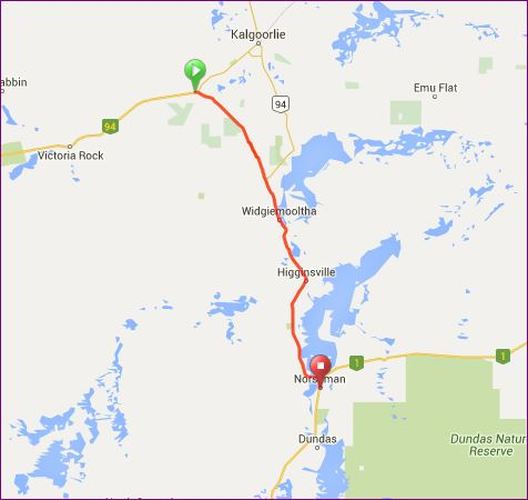 Heading for Norseman today in a more southerly direction - and with more metres descending which sounds good to me!! After 5 days, this will be my last day biking on the Great Eastern Highway 94.

Norseman is the last major town in WA - but in actual fact I am only half way from Perth and still 720 kms from the WA / SA border!!

The quest for gold led to the establishment of Norseman. Today there are a number of small gold-mining operations in the area but only the Central Norseman Gold Corporation can be considered a major producer. Gold was first found in the Norseman area in 1892.In July 1894, Lawrence Sinclair and his horse "Norseman" discovered a rich gold reef which Sinclair named for his horse. Once it was the second-richest goldfield in Western Australia, next to the Golden Mile of Kalgoorlie. It is claimed that since 1892, over 100 tonnes of gold have been extracted from the area. The Norseman Gold Mine is Australia’s longest continuously running gold mining operation as it has been in operation for more than 65 years.

I went back out to Coolgardie (in Jucy) and then set off on my bike for Norseman from the spot I had stopped at 2 days ago! Heading South all the way over a pretty flat to undulating road it was fairly easy riding to start with. The uphills seemed to get more difficult as the day wore on, and the last 20 kms were a bit of a battle!!

It certainly gets hot in the afternoons - and despite taking plenty of liquid on board, fatigue sets in and the legs seem to run out of energy! And yes, I have to admit to a bit of a sore bum tonight - which will hopefully improve miraculously overnight!!!!

No punctures though and bike still just humming along!!

Thank goodness for iprimus / primustel as I was parted from my "crew" for awhile today, but safe in the knowledge that I could be in contact in an instant!!

Pat had to "deviate" from the path I biked so she could play Hole No. 3 of the Worlds Longest Golf Course at Kambalda. An "interesting" experience. The fairways were just ungroomed desert, and the "greens" were in fact "black" as it seemed to be a heavy oil like substance poured over the dirt/sand to give a slightly different surface to the fairway!!

Upon reaching Norseman she played holes No 4 and 5 while I caddied!! - now played 3 different courses with 3 different types of greens!!! These were made from artificial grass - like we usuallly see around swimming pools!! They were very difficult to "pitch" to as the ball would just bounce straight off. The 9 iron seemed to get abandonned and the 5 iron chip and run used as the approach shot!

Tomorrow is going to be my longest day's riding - so I better go and try to get a good nights rest!!
Charles M. Schulz reflects on life and bicycles.
"Life is like a ten speed bicycle. Most of us have gears we never use."