All funds raised during my ride across Australia went to either the Australian or New Zealand Heart Foundation depending on the donor’s wish.
It was a thrill to be named Best Individual Fund-raiser for 2011 by the Queensland Branch of the Australian Heart Foundation.
​Special thanks to EVERYONE who supported my ride.
Day 26 - April 25th, 2011
Dolo Hill (NSW) to Emmdale (NSW)
161.5 kms. 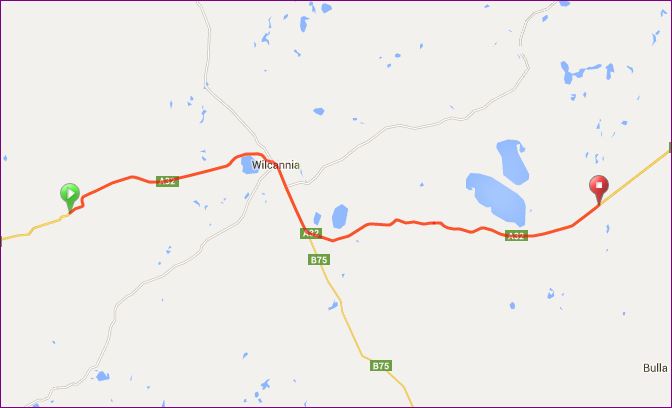 Change to original plans we will go from Dolo Hill, thru Wilcannia and on to Emmdale today!!!!

Another pretty barren stretch of the Barrier Highway, but thankfully downhill until we reach Wilcannia.

Wilcannia is a small town located within the Central Darling Shire in north western New South Wales, Australia. This was the third largest inland port in the country during the great river boat era of the mid-19th century.

Wilcannia is located where the Barrier Highway crosses the Darling River, 965 km from Sydney. The environment is borderline semi-arid to desert with an annual rainfall of 255 mm.

The surrounding area is very sparsely settled by pastoralists who have large land holdings, used primarily to run sheep. These holdings fall in the Western Division and the majority are held as 99-year leases.

The name Wilcannia is said to be derived from an Aboriginal term for either 'gap in the bank where floodwaters escape' or 'wild dog'. Neither meaning has been linguistically verified.

What a sleepless night last night turned into!!! In fact, it was quite a disaster!! Not that we needed the golf clubs – a couple of mouse-traps would have been more useful – but that is another story in itself!! During the night a couple of trucks and a couple of cars pulled in to take breaks but they certainly didn’t wake us – for other reasons – sleep was impossible! The Pied Piper of Hamlin was required here!! The mice were so bad, I considered heading off on my ride in the dark with my lights on – but with ‘roos etc around on the road I guess that would have been scarier than the mice.

As soon as daylight started to appear we were up, had breakfast and were on the road. There was even evidence that the little blighters had been running all over my bike in the night too! Thank goodness for its “fitted sheet” cover!!

The 60 kms into Wilcannia was pretty much downhill all the way, and with a nice strong tail wind it was easy riding. I am so glad I heeded all the “warnings” about not staying here. Such a shame to see the state of the place. I tried to get a photo beside something saying “Wilcannia” but a local “tagger” has spray-canned male genitalia on all signs, murals, art work etc. Just dreadful! The only sign that appeared untouched was that crossing the “Darling River” (as per the photo below) – that sort of made me grin to myself. There was a fair amount of water in the Darling reflecting the amount of rainfall that has been in the area or further upstream in recent times!!

So I moved out of Wilcannia almost as rapidly as I had arrived and biked along a rough straight piece of road. After about 5 kms, the road surface improved dramatically – YAY!!!! It also started to go uphill (not YAY). It didn’t look like it to the eye – but it felt to  my legs like my back tyre was flat and I was having to make much more of an effort to get anywhere. I added an extra break in after only 15 kms of travel which had been one long steady climb. It had made me rather grumpy – what had been good progress for the day had been wiped out and I still had 45 kms to go.

That final 45 kms was all downhill – absolutely brilliant – cruised it – to finish the day feeling much fresher than I did at the top of the "Ranges".

Emmdale Roadhouse is "cute" - which seems a funny word to describe a Roadhouse. It has only 3 powered camp sites, so we secured a site and I sat beside the power outlet, using all three outlets to power my computer, charge phone and camera batteries, and catch up with my writings!

Two other campervans travelling together arrived late in the day, just as my batteries were charged so it all worked well. Of course noting a couple of bikes on one van raised my curiosity. I was busy wiping my bike down – and this guy says to me – “Hey, do you want to go for a ride” – my reply – “Ummm, not really, I’ve just done 160 kms = how about in the morning, you could ride along with me for a way?” – And then the story of what I am doing was told. “Ian” even took my bike for a spin – so funny to see a tall guy on my XS Giant Avail!! They thought what I was doing for the Heart Foundation was great and both couples donated generously. Meeting people such as this has really been a highlight of the trip!

These campers were travelling west, and as such due to cross the quarantine border tomorrow, so we became the recipients of a large assortment of fruit and veg!!!! Excellent stuff!!
A bicycle ride is a flight from sadness.
James E. Starrs - The Literary Cyclist.